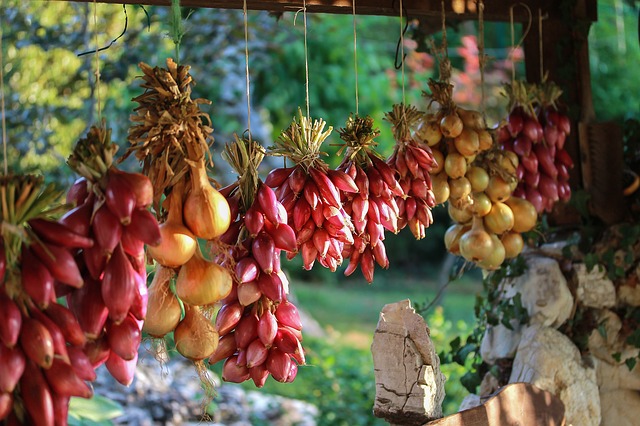 A to Z Herbarium: Onion

Onions were worshiped in ancient Egypt. The multiple layers symbolized eternity, and were used in funeral rites. Paintings of onions appear on the inner walls of the pyramids and within tombs. They have also been entombed with mummies, found frequently in the pelvic region, the thorax, flattened against the ears, attached to the legs and feet, and placed in front of the eyes. King Ramses IV was entombed with onions in his eye sockets.

It’s theorized that the Egyptian’s may have believed the onion’s strong scent/magical properties would make the dead rise. Another theory is that the onion’s antiseptic properties (which were considered magical back then) would come in handy in the afterlife.

Onions protect against evil forces, whether grown in the garden or in pots. Taking a white onion, sticking it full of black-headed pins and placing it in a window will prevent evil from entering the home. Carrying an onion will protect one from venomous creatures (snakes, again!). When halved or quartered, onions will absorb negativity, evil, and disease.

Onions placed beneath one’s pillow will cause prophetic dreams. If you throw onion skins on the ground, it’s said you are throwing away your prosperity. Instead, you are supposed burn them to attract riches.

Strangely, onions are also supposed to promote lust. (This has not been my experience…)

In the Middle Ages, onions were one of three main ingredients in the European diet (along with beans and cabbage). In addition to food, onions were used to alleviate headaches, snake bites, and hair loss. They were also used as money to pay for rent, and given as wedding gifts.

Onions have anti-inflammatory and antibacterial properties. New England settlers would hang strings of onions to prevent infections, as well as leave a cut onion underneath the sink for the same purpose. For magical healing, rub a cut onion against an afflicted part of the body, visualizing the disease going into the onion, and then destroy it either by burning the onion, or smashing then burying it.

On a less magical note: eating onions has been linked with reducing the occurrence of certain kinds of cancer, particularly stomach and colorectal cancers. Onions may also help alleviate depression, promote good sleep, promote cardiovascular and bone health, and aid in digestion.

Nerd Alert: Davos Seaworth from George R.R. Martin’s A Song of Ice and Fire novels is called the Onion Knight. Though, the game Final Fantasy had an Onion Knight first.

Never known onios was so magically powerful.
Even used as money! It’s absolutely fascinating and unexpected.

Yeah, I loved that little tidbit. 🙂

With all the onions I eat, I shouldn’t have any headaches… unless that’s where the eternity thing comes in? *shivers* Perhaps I should rub an onion against my head and then burn it… will definitely keep the mosquitoes away! Happy A-to-Z-ing.

Yeah, I was wondering if eating onions for headaches had more to do with vitamin deficiency than anything else. Which I imagine must have been pretty prevalent back in the Middle Ages.

Onions are very health-promoting. They’re also great, boiled, for loosening up a congested chest. Perhaps their wellness attributes led to their folkloric connection with dispelling “evil” — such as illness. Fascinating post!

It’s entirely possible. The strong smell probably helped in that regard too, I’d guess. 😉

Onions and cabbage are two stables of my diet! I could have survived in the ancient world.

Me too! I love my beans and onions (and occasional cabbage). 😉

Now that’s one useful plant. I did not know the Egyptians revered them so.
Sophie
Sophie’s Thoughts & Fumbles – Dragon Diaries

I didn’t know it either. It’s pretty cool.

Okay,now whilst I’m glad to find another plant to protect against snakes, I’m not sure about eating or wearing this too often. In fact I think that would have the opposite effect of lust to my beloved. The historic beliefs around it are so interesting – thanks for sharing.

Haha, yeah I had to chuckle when I read that about lust. It’s definitely been more of a repellent in my case. 😛

Had no idea onions were so versatile. I wouldn’t be too keen on rubbing one on an afflicted body part, but there were lots of similar practices back then. Quite glad we’ve moved on a bit!

Yeah, it’s very easy for me to romanticize the past and all, but ultimately I’m quite thankful for modern medicine, sanitation, stuff like that. 😉

The humble onion – who knew it was so revered! Over consumption though can lead to a gassy tummy I’ve found. I’ve heard that putting half an under under the bed (on the ground) can help a tight chest or coughing. Thanks Sara, most interesting.

There’s greatness in the humble things. 😉 I think I’ve noticed the gassiness when I make a pot of onion soup. I don’t make it that often though.

Hi Sara .. what an incredible array of possible potions for us – I certainly knew the Egyptians grew them in abundance as too garlic … the other silly fact is when they give you a hip operation … they peel the skin back like onion leaves!! then each layer needs to heal … outer to inner – my hip is now ‘perfect’!! Cheers Hilary

I’m glad your hip is in good shape now, though I’m slightly horrified at the onion peeling analogy for the skin. Ouch! 😉

My bf jokes that all Hungarian recipes begin with “take 4lbs of onions and a whole garlic…”
I do love onions and garlic. They are healthy! 😀

Hehe! They are healthy! It’s what I tell my bf when he gives me crap about eating them. 😉

I had no idea about the important role onions played in Egypt. How fascinating. I do love onions, so now I’m feeling all chuff at my brilliance – clearly all those medical and magical benefits are mine to claim.

Indeed they are! Wear your onion badge with pride. 😉

I thought of you when writing this. 😉

i didn’t know most of what you said about onions today. Egyptians revered them. that is cool.

this highly informative today. I enjoyed it.

Glad you liked it! 🙂

My ex forced me to eat raw onion to try to either cure or stave off a cold once, and the taste was so disgusting. Even holding my nose and swallowing little pieces one by one was a gross experience. I always leave onions out of a recipe when I’m the one cooking, and pull them out of food whenever I can. It’s never been a taste or texture I’ve liked, no matter how they’re prepared.

I hated onions as a kid, and it took me a while to learn to like them in my adult life. I still don’t like too much raw onion (a little goes a long way), but yeah, there was definitely a mental block for me of just seeing onion in food that I had to get over. Sorry about your unpleasant onion experience. That doesn’t sound fun.

Onions make me cry! In a nice way though. Like those before me, I didn’t realise there were so many layers beneath the skin of the humble onion. Interesting!

Scrambled egg with onion and chillie makes a delicious snack!