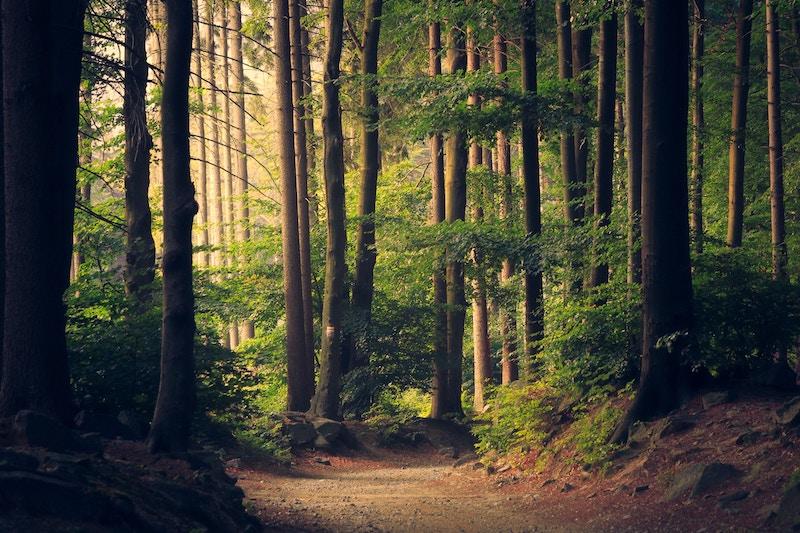 The Magical Properties of Trees

If you’ve read any of my stories, then you probably already know how much of a part nature plays in them. Particularly trees. My stories often take place in woods or forests, or even if they don’t, trees will often sneak in somewhere to play a significant part (like in The Forgotten Web).

The Hazel and Holly story is a little bit of both. The first half of that story takes place in a woodland area, and then we have the names of many of the characters based on trees and flowers. Honestly, the naming convention is a result of the story stemming from a post written for the A to Z Challenge last year, which I then took and ran with and started posting on the blog.

So, for me, trees hold story magic. But even in the real world, many trees were once believed (and continue to be believed in certain circles) to hold magical properties. So I thought it would be fun to look at the main characters in Hazel and Holly and investigate their real-world magical counterparts. 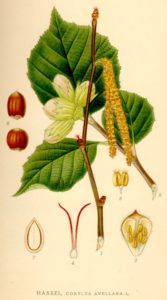 Hazel is connected to knowledge and wisdom, and to beauty and love. The tree is associated with the Greek goddess Aphrodite and the Celtic goddess Arianrhod. Hazel nuts are said to feed the Salmon of Knowledge in Irish lore, and hazel wood is one of the most common used to make magical wands. Hazel promotes love and creativity, and is also used in spells surrounding navigation, protection, visions, and inspiration.

Holly is one of the most sacred trees in the Druidic tradition. The Holly King battles and defeats the Oak King every Midsummer and reigns until Midwinter. Odin’s sacred spear was made of holly, and the Roman god of war, Mars, is said to reign over the wood. So it’s perhaps unsurprising that holly is used in magic for protection against all sorts of ills (evil spirits, poisons, angry elementals and lightning). It is also used in magic concerning sleep and dreams, and power transfer (represented, I believe, in the continuous battle of the Holly King and Oak King).

Fun fact: the Swedish word for holly is järnek, which literally translates to “iron oak”.

Fairies are said to live in hawthorn hedges, especially if near ash or oak. Due to this, hawthorn is used in fairy magic and can be used to detect magic. Hawthorn is also known as the May tree, and its blossoms are traditionally used in garlands to decorate the top of may poles. (May pole decorating and dancing still happens in Sweden. I’m now wondering if they use hawthorn flowers…). Hawthorn is used for many other magical purposes, the most common being purification, weather working, protection, and sexuality.

It was a bit more difficult finding information on the magical properties of hemlock. Maybe because hemlock is poisonous, which I imagine has probably limited its uses somewhat. Socrates was apparently killed with hemlock.

The Dark Goddess is manifested in mythology as various kinds of death crones, wise hags, devastation, war, disease, and barrenness of the land. The Dark God is seen in mythologies as the silent host to the dead in his underground realm of gray shadows and deep sleep, knowing of secrets and wise of the universe, death, war, destruction, gatherer of souls, and harbinger of chaos.

I think it’s important to note that “dark” doesn’t mean “evil” here. It’s just the other side of the coin, the shadow cast by the sun, the winter that follows summer. A cyclic decline into darkness that’s natural and necessary in order to return to light. So in this spectrum of magic, hemlock can be used in spells of power, purification, protection, and astral travel.

Do you have a favorite tree?

Images by C.A.M. Lindman from the book Bilder ur Nordens Flora and courtesy of Projekt Runeberg.

I love trees, flowers and plants in general, but I especially love evergreens and redwoods. 🙂 This is interesting, nature does play a big part in mythology from different cultures.

I love redwoods! They’re probably the #1 thing I miss from California. Well, that and the family, but whatever. 😉

According to Celtic astrology I was born under the sign of the Ash:
Ash – The Enchanter
February 18 – March 17
Those born under the Celtic tree astrology sign of the Ash are free thinkers. Imaginative, intuitive, and naturally artistic, you see the world in water-color purity. You have a tendency to moody and withdrawn at times, but that’s only because your inner landscape is in constant motion. You are in touch with your muse, and you are easily inspired by nature. Likewise, you inspire all that you associate with and people seek you out for your enchanting personality. Art, writing (especially poetry), science, and theology (spiritual matters) are areas that strongly interest you. Others may think you are reclusive, but in all honesty, you are simply immersed in your own world of fantastic vision and design. You are in a constant state of self-renewal and you rarely place a value on what others think about you. Ash signs partner well with Willow and Reed signs.
(Interestingly enough, I married a Willow.)

Ivy – The Survivor
September 30 – October 27
Among other cherished qualities of the Ivy Celtic tree astrology sign, most prized is your ability to overcome all odds. You have a sharp intellect, but more obvious is your compassion and loyalty to others. You have a giving nature, and are always there to lend a helping hand. You are born at a time of the waning sun so life can be difficult for you at times. This sometimes seems unfair because it appears that obstacles are coming at with no prompting on your part. Nevertheless, you endure troubling times with silent perseverance and soulful grace. Indeed, Ivy signs have a tendency to be deeply spiritual and cling to a deep-rooted faith that typically sees them trough adversity. You are soft spoken, but have a keen wit about you. You are charming, charismatic, and can effectively hold your own in most social settings. Ivy signs are attracted to the Celtic tree astology sign of Oak and Ash signs.

They lost me at “hold your own in most social settings”. 😉

You can, you just chose to spend less time in social settings. 🙂

Laurel - a couple of years ago

Thank you for the article. I love to glean information from many sources. I was looking for properties of the hemlock tree. I believe you have confused the tree with the poison plant.

The hemlock tree (tsuga canadensis) is not poisonous. The plant that killed Socrates was conium maculatum, which is related to carrots. Thanks, otherwise.