Wow, apparently it’s been two months since I last updated the blog. That can’t be right, can it? Sometimes it feels like I’m living in an alternate universe where a few weeks for me equals two months for everyone else. Needless to say, things got crazy. We had company staying with us during November and then, of course, Sally vet visits are still happening.

We decided to have her bad teeth pulled (and we had to change vets because the other one wasn’t willing to do it due to her weak kidneys). First two teeth got pulled without incident, and without negative effect on her kidneys. Yay! The second two teeth, which were pulled on Monday, the surgery went well enough, but she ended up developing an infection in her mouth the day after. So they needed to put her back under anesthesia and clean everything out. I was worried about her kidneys, so they tested her values again and they were actually lower. So, honestly, she’s doing pretty well. Which feels like a pretty nice Christmas present.

Seriously though, how crazy is it that Christmas is already here? Time has passed so jarringly fast for me that I’m starting to suspect trickery by some dodgy Christmas gnomes that can manipulate time in retribution for my failure to leave out rice porridge for them. That’s surely the only logical explanation.

A history of telling scary stories around Christmas time

A spooky Christmas story to get you started

Some history of the origins of Krampus (a demonic he-goat that terrorizes children around Christmas time. Good fun!)

How the tradition of kissing under mistletoe came to be 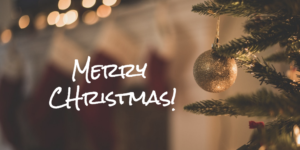 I hope you have a splendid holiday season! Hug someone you love, and be sure to rid your house of pesky gnomes!

P.S. The Yule Goat in Gävle is still going strong! At least he was last I checked. Maybe he’ll make it this year…

It does indeed. Merry Christmas, Michelle! 🙂

There was an eposide on National Public Radio this evening of scary Christmas stories–mostly designed to keep kids from discovering the truth of Santa. Have a Merry Christmas–I am sure you have snow and cold weather and I was sailing without any extra gear on (not even a jacket) today.

Snow is sporadic this time of year, and right now it’s bare ground. The cold comes and goes, though it’s never warm enough to go without a jacket! Sounds like splendid sailing weather, though! Merry Christmas!

So happy Sally is hanging in there. That is indeed a wonderful Christmas present.
Merry Christmas to you, one and all.

Me too. She’s getting bossy again and less clingy, which is great because it’s more like her. Hope you and Jim had a fabulous Christmas!

Ah, rice porridge — that must be it. I’ll get busy making some, and then hope the squirrels don’t get it first. ? I hope Sally continues to do well. Merry Christmas, Sara!

The trick is to make enough rice porridge for the squirrels and the gnomes. 😉 Thanks, Samantha, Merry Christmas to you too!

I hope Sally is doing good, you too. hehe… Take care this Christmas season, have lots of fun.

Aw, thank you! Hope you have a fantastic new year!

Stopping by to wish you a great 2018, full of expected and unexpected happy surprises. Keep those creative juices flowing – and being the person you are …

She’s fully recovered from her teeth pulling. Her kidneys, however, well, she will never fully recover from that. For that the best we can hope for is her not getting worse. And, yes, she is most darling!

Thank you, Susan! I hope your year will be wonderful as well. 😀