Well, here in Sweden the trees are already starting to turn. The summer has pretty much come and gone without much to show for it other than high vet bills. Sally Kitty is doing all right, though I can’t really say she’s doing well. Her latest blood work has shown her kidney function has worsened, as has her rather severe pancreatic inflammation. Yet even for all that, she’s pretty chipper, affectionate, and eats well. So, that’s something, at least.

Anyway, aside from visiting the vet every other week, we’ve spent a lot of time house hunting. Well, not so much during July, as the country generally shuts down during the month as everyone goes on vacation. But it’s definitely started up again as houses are once again listed.

Let me just say that the housing market, right now, is bonkers. People seem to be throwing money at houses beyond all reason. But the process does have its moments. Like this one farmhouse we considered looking at. Originally built in the 1800s, though a lot of its original details had been renovated away, unfortunately. But what made this house interesting is that, when looking at a map of the property, it had three runic “R”s. Like this: 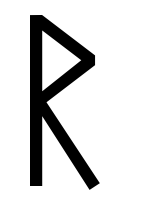 I’ve seen those letters on maps before, and I’ve always assumed they mark the locations for rune stones, which are scattered throughout the Swedish countryside. Like this one just hanging out by a road. Or another one that’s been built into the foundation of a church. 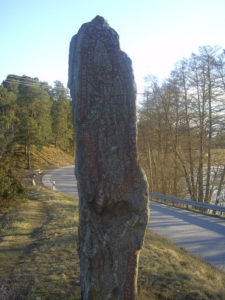 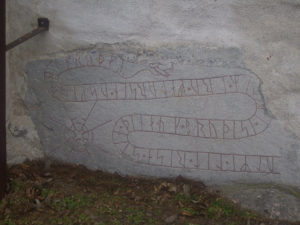 So, Anders ends up contacting the realtor to ask if there are any prohibitions in place to protect the culture and history surrounding said stones. The realtor replies that those aren’t rune stones indicated on the map, they’re burial sites from the Iron Age.

Uh, OK. Kind of creepy, but… COOL! How’s that for history? Of course, my mind started working overtime with all the different possibilities, and constraints. Are we allowed to dig? Surely just having a garden wouldn’t be a problem, would it? But… what if I am digging in the garden, and I dig up a hand. How will I feel about that?

We started calling that house the Graveyard House. Ultimately, we passed on it though. Despite its excellent story possibilities, the amount of work it needed was rather daunting, as it had several old outbuildings that looked like they were in the process of falling over. Plus, it ended up selling substantially over the asking price. Remember what I said about people throwing money at houses? Yeah.

Still, though, it’s fun finding little gems like that.

Would you want to live in a house surrounded by burial grounds?

Buying in an inflated market isn’t fun and is scary, but that does sound like a cool house!

Yeah, it is kind of scary. Everybody just needs to calm down. 😉

It’s nice to see a post from you again. Graveyards are interesting, but I don’t know that I would want to be surrounded by them. That would be rather creepy. House hunting can be a challenge, good luck with that.

Thanks, Michelle. As long as the dead stay that way and avoid hauntings or anything like that, I think it’d be OK. 😉 House hunting is definitely proving a challenge. I have something of a love/hate relationship with it. 😛

I would probably want to research the property and find out what – exactly – happened there. Was there a battle, or was it just the family burial plot? In any case, I’d definitely wait for the market to cool off a bit. No sense in joining the craziness of throwing away money.
Glad to hear that Sally is doing okay, if not great. So hard when we can’t make everything better.

Hmm, I suppose it might be a bit more disconcerting living near, say, an area of mass slaughter, vs. a random clan’s burial plot. 😛 We’ve considered waiting for the market to cool. The thing is, prices have been steadily rising for the past decade or so. So who knows when THAT will happen. I think we’re just going to bide our time. Wait for the right house at the right price. However long that takes. Definitely not joining in on the “Take My Money!!!” madness.

Thanks about Sally. It is really hard. Apparently she didn’t get the memo about becoming immortal.

Hi Sara – sorry about the house, but it sounds such an interesting place – there must be records for it somewhere …. even if you’re not going to be living there. Good luck with the house search though – sure hope something comes up … cheers Hilary

No worries about the house–wasn’t the greatest fit. There are records regarding places like this. There’s even an online database that documents a lot of the information. It’s very confusing to use, though. Very “we’re in the business of science and not at all concerned with user friendliness”. I gave up after a while. And thanks! Something’s bound to pop up sooner or later. 🙂

You would definitely have ghosts living there and life wouldn’t be boring. I’d probably pass because my imagination would go into overdrive and I’d scare myself. LOL

Yeah, who knows what my imagination would do to me if I lived there haha. 😀