I very nearly wasn’t going to post anything this month. After the madness of the A to Z Challenge, I was fully prepared to just post a picture of my cats and call it a month. But, during the very same challenge, I met Rhonda Parrish, and she was looking for folks interested in participating in a cover reveal. I thought the book sounded interesting, so I signed up. And while I am mildly disappointed not to be sharing a picture of my cats, I am very pleased to share the cover of this upcoming short story anthology!

A is for Apocalypse

What do you get when you take twenty-six amazing writers, randomly assign them a letter of the alphabet and give them complete artistic freedom within a theme? 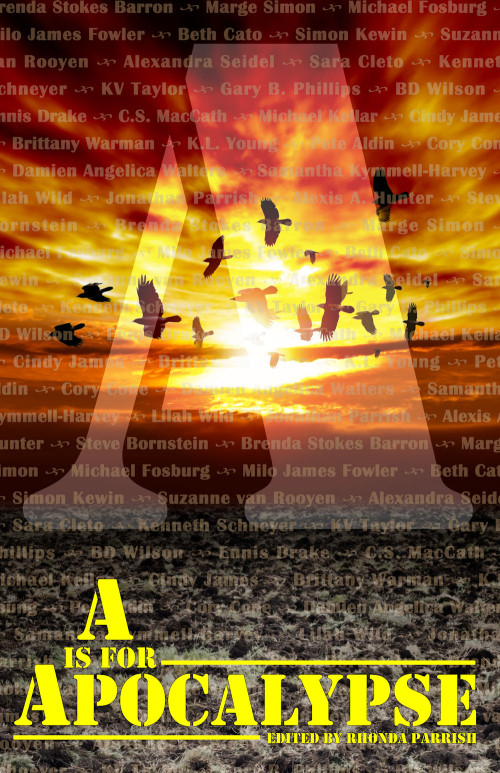 A is for Apocalypse contains twenty-six apocalyptic stories written by both well-known and up-and-coming writers. Monsters, meteors, floods, war–the causes of the apocalypses in these tales are as varied as the stories themselves.

“In A is for Apocalypse, the world ends in both fire and ice–and by asteroid, flood, virus, symphony, immortality, the hands of our vampire overlords, and crowdfunding. A stellar group of authors explores over two dozen of the bangs and whispers that might someday take us all out. Often bleak, sometimes hopeful, always thoughtful, if A is for Apocalypse is as prescient as it is entertaining, we’re in for quite a ride.” – Amanda C. Davis, author of The Lair of the Twelve Princesses

“Editor Rhonda Parrish gives us apocalyptic fiction at its finest. There’s not a whimper to be heard amongst these twenty-six End of the World stories. A wonderful collection.” -Deborah Walker, Nature Futures author.

A Fun One-Question Interview With the Authors

In choosing a theme for this, the first of a series of anthologies, I considered and rejected a great many “A” words. Tell us about your favourite word that begins with the letter A.

Alexis A. Hunter – As an author — ‘acceptance’ has a beautiful ring to it.  As a sci-fi writer — ‘apex’ is particularly engaging.  In general — ‘angel’ is one of my favorite words, because they’re one of my favorite ‘creature types’ to play with in stories.  Plus I have a thing for wings and feathers.

Michael Kellar – My “A” word would be arachnid. I’m a spider person. (You could consider this when you get to “S is for…”)

Damien Angelica Walters – My favourite word that begins with the letter A is anathema. It rolls off the tongue like a whisper, hiding its dark meaning in pretty syllables.

Marge Simon – Alliteration because it’s a beautiful word.  Sorry if it doesn’t connote anything bad, like assassin. 😉

Simon Kewin – My favourite A word is (possibly) Archaeopteryx. I love the shape of the word. It’s exotic and fantastical and ungainly all at the same time – a little like the creature itself. It derives from the Greek archaeo (ancient) and pterux (wing). So, “Ancient Wing”. Archaeopteryx is a lovely illustration of the forces of evolution in progress; it’s a snapshot of a species in the process of changing from dinosaur ancestor to modern avian descendent. Here was a creature with a bony tail and teeth and feathers. And claws on its wings. I’d love to have seen one…

Sara Cleto – My favorite A word is amethyst, a purple-violet quartz often used in jewelry (particularly at Renaissance Faires!) As a little girl, I was obsessed with the color purple, and my mom’s amethyst jewelry was the subject of much fascination- I was sure the stones had some sort of magical property, and I seem to recall trying to do spells with them… And now, in my old age, I’m deeply amused by their purported ability to prevent excessive intoxication.

Beth Cato – Tricky question since my absolute favorite word begins with B. For A words, I have to say I like “anaphylactic.” It’s morbid, I know, since the meaning is a severe allergic reaction, but I like the word because it has a cool poetic rhythm.

Suzanne van Rooyen – This is really tough to answer! There are so many great words starting with A like analogy, allegory and awesome! But I think my favourite is actually a name. Atreyu. Atreyu – the character from The Never Ending Story – was my first major crush as a kid and that film was such a huge part of my childhood. If I ever have a son one day, his name is going to be Atreyu.

Brittany Warman – The first of my favorite words that begin with A that I thought of was “aurora” – not only is it frequently the name of the princess (or her daughter) from “Sleeping Beauty,” a favorite fairy tale of mine, but it was also my very first online screen name! I just love the concept and the way the word flows off the tongue too. It seems to convey mystery, beauty, and strength to me.

C.S. MacCath – My favourite ‘A’ word is ‘atonement’, because unlike ‘forgiveness’, it places the onus for righting a wrong where it belongs; upon the head of the person who committed it. If we were socialized to atone as much as we are already socialized to forgive, we might learn to be more careful with one another.

Rhonda says: I’m giving away three ARC copies of A is for Apocalypse (tour-wide). These are physical copies but I am willing to ship them to anywhere in the world. The Rafflecopter draw will run from May 12th to May 19th. On May 20th I will choose three winners and email them in order to get their shipping address. Anyone who doesn’t respond by May 27th will forfeit their prize and I will choose a new winner to receive it.

A is for Apocalypse on Goodreads

[box type=”bio”] “Rhonda Parrish is a shapeshifter with talents to match her every incarnation- magpie tenacity for picking the shiniest submissions, nightingale notes for crafting tales, and bright, feline eyes for seeking out her photographic subjects. She balances on the knife-edge of darkness and light, a sorceress of both realms.” – Sara Cleto[/box]
0
Shares




Thank you for participating in this cover reveal. After the posts you put together for April no one in their right mind would have criticized you for taking a month off blogging, and I appreciate you making an exception for me 🙂

I hope you enter the draw for an ARC — if you win one you could take a picture of it WITH your cat! 😉

My pleasure Rhonda! It seems like a really cool book.

Hmm, you make a good point. Consider me entered. 😉

Sounds like an interesting read. I nominated you for a Liebster Award. I don’t know if you are familiar with it or not, but the details are at http://lorilmaclaughlin.com/2014/05/17/the-liebster-award. Accepting the award is completely optional, but I wanted to let you know that I really enjoy reading your posts. 🙂

Thank you so much, Lori. You’re actually the second person to give me a nomination, which is really quite wonderful. I’ll have to get off my posterior and accept it. 😉

What a great idea for an anthology! It’s fun hearing about different authors’ favourite A words, too.

It’s an anthology that could fit in the A to Z Challenge. 😉