A to Z Challenge Theme Reveal 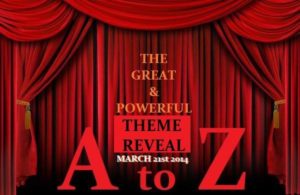 When I first read about the A to Z Challenge and how the goal was to blog nearly every day for a month, I was like, “Oh, hells no…” I mean, I blog once a month, sometimes twice a month if I’ve got my act together. Blogging nearly every day seemed like a masochistic experiment (and it might still be; ask me about it once it’s all over).

Yet I found the concept interesting, and it got me thinking — if I were to blog every day for each letter of the alphabet, what would I write about?

Listed among my favorite things in the world is mythology and folklore. Fairy tales, constellation myths, stories about things that go bump in the night. I love all these things. In order to have the stamina to blog for most of April, it would have to be about something I love. And so, to that end, I decided on the theme of A Bestiary of Mythological Creatures (and People).

I was originally just going to post about creatures. But once I got started, I was drawn to posting about people as well.

And So? What Makes This Theme So Interesting?

Honestly, it probably won’t be that interesting unless you’re like me and like this sort of thing. I am trying to write about things that are perhaps lesser-known than the standard mythological icons like Zeus and unicorns. Most of the entries will be of people and creatures from actual folklore of different cultures, but there are a couple in there that are my own fictional creations from my newly released book.

In the posts themselves I describe various creatures, and what it is I like about them. Other entries are basically synopses of stories. Some will have my own thoughts, explaining why I chose them. Others will simply stand on their own, because for those, there’s really nothing I can add other than to say how awesome they are.

And that’s basically it. I’ve been having a blast writing the posts for the challenge so far. I hope you’ll enjoy reading them!

Here are the posts if you’d like to read them.

Awesome idea to do. Don’t tell anyone, but my A2Z Challenge, on day 2 I discuss bestiary. It’s a brief mention, as I discuss 2 topics each day and link them together.

I look forward to your posts. Best of luck to you.

Hey Christopher, that’s cool. 🙂 I’m now curious how you link a bestiary together with whatever your other topic is. Sounds interesting! Best of luck to you as well. 🙂

First off, it’s nice to meet another Snider, although I claim the name by marriage only!

Secondly, I think you’ll be surprised by how much interest there is in your theme. Last year, one person blogged about quirky princesses, for instance, and she got lots of comments and interest.

Ya never know… I wound up writing a book based on my posts from last year because of the response I got. A to Z can be a good way to “test the waters.”

Looking forward to your posts! 🙂

Always a pleasure to meet another Snider, especially one whose name is spelled correctly! 😉

Quirky princesses sounds like fun, a shame I missed it. And that’s pretty cool you wrote a book based on your A to Z posts. How fun!

Thanks Tui, and likewise! 🙂

Yay! I do love mythology. You’ll have a lot of fun with this 🙂 Incidentally, my post for A will be a mythical creature too 🙂 I can’t wait to compare notes! Happy A to Z!

Yay Tarkabarka! Should be fun indeed! Looking forward to it. Be sure to leave a link to your website so I can find you. 🙂

I did fairy tales for my theme in 2012, I can’t wait to read your posts, your theme is definitely my kind of thing.

Thanks Laura! Should be fun. 🙂

The beauty of the A-Z Challenge is that we venture outside what we normally read, expand our horizons. I love that. And I like your idea/theme.
Silvia @
SilviaWrites

congrats on overcoming your first reaction and jumping in! I look forward to meeting your mythological creatures. I think if the writing is interesting, about any topic can be interesting.

Oh. I am looking forward to this.

This is going to be a fantastic theme to follow.

Carrie~Anne at That Dizzy Chick

Did I tell you how excited I am about this? I’ve heard about the a-z thing but wasn’t really interested in anyone’s UNTIL NOW.

Great theme! Looking forward to your posts. I love monsters and will be back everyday!

A bunch of bloggers in the A to Z are doing a mini-hop (within the main A to Z Challenge) of Supernatural themed posts. We would love to have you join us.

The information and sign up is over at http://tashasthinkings.blogspot.com/2014/03/supernaturalatoz.html.

Hope you can join us!

Tim
—
Timothy S. Brannan
The Other Side, April Blog Challenge: The A to Z of Witches

Thanks, Timothy! I’ll check it out. 🙂

I can never have to much mythology and folklore in my life! Looking forward to reading your posts throughout April.

I’m participating in AtoZ, as well. My topic is writing in general + my current work-in-progress in particular.

Can never have too much, indeed. 🙂 Thanks for stopping by, Andi-Roo!

Maybe our creatures can get together, have some tea, discuss whether or not Sisyphus will ever stop rolling that rock around. You know, hang out. 😉

Very cool idea. I wonder, are you going to attach pictures to your posts? Those will be very VERY interesting.

There will be some, but not for all of the posts. I had thought about adding a picture for each post, but it got too problematic. For one, not all of these creatures have pictures (they’re made up by me, for example). Another problem is finding a good picture with a creative commons license. Without one, I’m just not comfortable posting it.