A to Z Herbarium: Ash

Woohoo! First post of the A to Z Challenge 2017. In case you can’t tell from the banner, the theme here is Magical and Medicinal Plants and Herbs. And the first entry is… 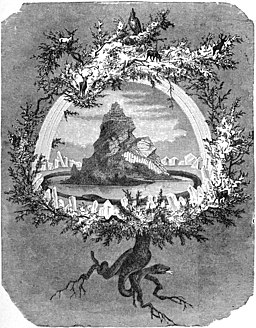 Yggdrasil, the World Tree in Nordic lore, is an ash tree. It is associated with the god Odin, who hung himself on the tree and gained knowledge of the Futhark Runes. Similarly in Druidic lore, the ash tree symbolizes the Cosmic Axis of the universe, spanning through different realms and realities.

A traditional witch’s broom is made with an ash staff, birch twigs and willow bindings. It’s possible that ash was used as the handle because of its association with the World Tree, symbolizing a shaman’s or witch’s “flight” between worlds.

In some traditions, witches were believed to live in ash trees, such as the Germanic Askafroa (wife of the Ash), who was not very nice and tended to cause damage, but could be appeased if one made a donation to her on Ash Wednesday.

Small crosses of ash were used to keep a man from drowning at sea. A staff of ash hung over a doorpost would ward malign forces, as would ash leaves scattered in the four directions around a house. Ash leaves can also be placed under a pillow for prophetic dreams, or carried around to gain the love of that special someone.

The tree was used to cure multiple ailments, ranging from lameness and swellings in cattle, to curing children with whooping cough. For victims of a snake bite, twigs of ash were twined together in a circlet and hung around the neck. This practice apparently had something to do with the fact that snakes are supposedly afraid of ash wood and will not crawl over it (I imagine that’s due to creepy witches living inside).

In Irish lore, if an ash tree cast a shadow upon crops, then the crops would be ruined.

If you want your child to be a good singer, bury its first nail clippings under an ash tree. But not during a storm, as ash attracts lightning.

For the nerds: Gandalf’s staff was made of ash. (Though the Welsh Magician/God Gwydion did it first.)

I knew Ash was an important wood, but I didn’t realise witches brooms were traditionally made from it. So many facts :). Great post, thank you.
Tasha
Tasha’s Thinkings – Shapeshifters and Werewolves

Yeah, same here. I’m learning along with everyone else. 😀 Thanks, Tasha.

Hi Sara – Ash is an amazing tree – fascinating lore you’ve given us … I’ve written about its use as a wood – flexible, burns fierce while it is green … thanks for this introduction to the Viking’s love of this tree … cheers Hilary

Glad you liked it, Hilary. I didn’t know that about burning it while green. Pretty neat.

The lore of plants is fascinating, it says so much abotu our cultures. But I also like to know about the properties of plants. It’s incredible how many of this peroperties are still used today.

Great starting to your challenge!

Very true. I find it really interesting to read about how some plants were used to treat certain ailments several hundred years ago that are are still used today, some with research to back up its effectiveness. It’s pretty cool. 🙂

Enjoyed reading this post and learning about the Ash tree. I was always fascinated with the many pictures I see of the Ash tree. Definitely, love that you gave the association of the Ash and its properties it has in curing ailments. Can’t wait to read more this month!

Thank you! I’m glad you enjoyed it. 🙂

M R James has a spooky story about evil things living in an ash tree and cursing an entire family – it is entitled, simply, The Ash Tree. Of course, it was the family’s fault for condemning a poor woman to death for witchcraft in the first place.
Sophie
Sophie’s Thoughts & Fumbles – Dragon Diaries

Very cool! Thanks for sharing that. Seems like the story line is rooted (hehe) in the “witches living in ash trees” lore

So interesting Sara thank you –

Good to see you here, Susan. I’m glad you enjoyed it. 🙂

Loved reading about Ash – makes me want to go out for a walk today and find a tree. Looking forward to the rest of the month and your following posts.

I love walking, and tree watching sounds like a splendid idea. 😉 Glad you enjoyed it, Deborah!

Well, the only one of those facts that I knew was about Gandalf’s staff (yes, I am a nerd!) Thanks for sharing!

Prior to writing this post, I didn’t know any of them, including Gandalf’s staff. I might need to turn in my nerd card. 😉 Thanks for stopping by!

Love this post. So much exciting tidbits of crazy logic! 😀

I hope all your posts read like this one, Sara. This was awesome!

Thanks, Marna! Glad you enjoyed it. 🙂

Great post. Very informative. I may refer to this collection in my stories… ?

Thanks Tanya. And yes! Hopefully you can get some use out of it. 🙂

So many things I didn’t know here about Ash… and I’m a bit embarrassed because one of my dear friends is a Norse pagan and I should have known about Yggdrasil. The Gandalf bit made me smile!

This is all new to me as well. Glad I could make you smile! 🙂

I never knew the ash was so powerful. I wonder if it all goes back to Yggdrasil or whether a lot is coincidence. Fascinating stuff!

Yeah I wonder about similarities in lore like this being a coincidence or if they’re related somehow. It is quite fascinating. 🙂

Such a cool post! Since I’m a bit of a pagan geek, I did know a bit about what you posted, but I did not know gandalf’s staff being ash wood. Awesome tidbit.

Glad I could share something you didn’t already know. 😀

That’s a lot of cool information. Definitely gets my muse thinking.

Thanks, Patricia. Always glad to get the muse pondering. 😉

I think I might have to plant an Ash tree in the garden as I love all the links it has to mythology and witches, and the bonus is that snakes don’t like it. Great first post and looking forward to the rest of your month.

It is a lore-rich tree, that’s for sure. Good way to get witches to come visit (and keep the snakes away, of course). 😉 Thanks, Pamela!

I wonder how people came up with some of these. Like, burying the nails under the tree? Some might have been observation plus folk logic, but I would like to know how others came to be 🙂
Great start! Happy A to Z!

I know, right? I was also wondering how burying nail clippings = good singer. Maybe someone buried the nails, you know, for fertilizer or something and, lo! Baby boy/girl grew up and had a belter of a voice! 😉

Thanks! Happy A to Z to you too!

Oh wow, I didn’t know any of this! Thanks for sharing, looking forward to reading the rest of your posts 🙂

Thanks, Laura! Glad you enjoyed it. 🙂

I didn’t know so much was made from the ash tree. I love this theme, I’ll be back for more!

So interesting! Thank you for sharing. I look forward to reading more.

I didn’t know that bit about Gandalf’s staff!

Me neither. I love learning new things. 😀

Until recently I lived in a village called Five Ashes which had five of the said trees on the green. Reading this has explained a lot!

That’s a cool name for a village. 🙂

Fascinating stuff – makes me wish we had Ash trees in India.

Thank you. I imagine you must have some fantastic trees in India though, that make up for any lack of ash.

I found an abandoned kitten under an ash and adopted it, naming him after his sheltering tree. Of course, like all cats, he was magical.

[…] your blog – you can do a bit of world-building, share research pertinent to your novel’s era, share strange folklore facts that you can later use in your own writing, share snippets from your upcoming novel to build […]