A to Z Herbarium: Blackberry 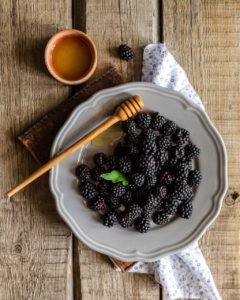 Blackberry is a cooling herb. Its leaves can be used to treat burns or, in a decoction, for a sore throat. The berries can be eaten—either fresh or in jam or wine—to alleviate stones or diarrhea. Blackberry syrup can help ease winter colds or flu. Brambles that grow in a natural arch can be used in magical healing. On a sunny day, one is supposed to crawl through the arch backward then forward three times (nobody said magic wasn’t awkward), going east to west as much as possible. This will cure boils, rheumatism, whooping cough, and blackheads.

The thorny branches (ruled by Aries and fire) are used for protection. Blackberry vines can be woven into protective wreaths and is especially effective when combined with rowan and ivy.

Blackberry leaves (ruled by Venus/Scorpio and water) are used in matters of female fertility. Tea brewed from the leaf is said to be a mild aphrodisiac. Leaves are also used in spells of wealth.

The berries symbolize femininity and are ruled by the element earth. They represent abundant harvests and can be used in spells and magical cooking for prosperity. Blackberries are traditionally baked into pies to celebrate harvest festivals, such as Lughnassadh.

Hmmmm I haven’t had blackberry tea before. (Not that I need an aphrodisiac)

You know, I don’t think I have either. I’m not a big fan of fruit teas, but I suppose it’s possible there might have been blackberry leaves in an herbal tea blend somewhere. Who knows! 😀

Hi Sara – excellent information here – most of which I didn’t know .. that festival of Lughnassadh is in August – I found interesting. Yes blackberry pie or crumble … so good, blackberry jam is good too … fun facts – thank you … cheers Hilary

Never knew that blackberry has so many medicinal values. pretty informative! looking forward to all your blogs this month.

My everyday banters in my tin(y)sel town

I’d like to see someone with whooping cough managing to crawl through a blackberry arch once, let alone three time ;). My favourite preserve is Bramble Jelly 😀
Tasha
Tasha’s Thinkings – Shapeshifters and Werewolves

I know! Haha! “Sorry, Grandma, I know your rheumatism is acting up, but get on all fours and crawl around that prickly bush a while. Attagirl.” 😉 Bramble jelly–yummy!

When I go blackberrying in the autumn I will know that’s there’s more to those little black beauties than blackberry and apple pie. Tasty.

I’ve got blackberries in the fridge, so now I’ll feel doubly good about eating them!

B is About Build-Up

I’ve got some in the freezer. I think there is a cobbler in their future. 😉

I love love love blackberries! We have them growing in the garden. Crawling under might be awkward, though, since they are growing on the fence… 😀

Nonsense, you just need to be committed, and slightly bendy, with thick, leathery skin… 😉

I didn’t realize blackberries had so many uses!

They are tasty and functional!

Thanks, Deborah. Though, you might change your tune should you develop whooping cough. 😉

I was never a fan of blackberries, but can’t really say why. Now I can’t eat them because of a health condition.

Sorry to hear about your health condition. 🙁 I do love blackberries and raspberries, but the tiny little seeds that get lodged in your teeth are a pain!

I like blackberry pie and blackberry jam. I like the berries by themselves too, but I actually don’t see them in the stores that often.

Blackberries usually only appear in stores in the summer here. Have to make do with frozen in the meantime. Blackberry pie and jam, yummy!

i learned a lot about blackberries today. I enjoyed this one.

Thanks, Djinnia. And now I know never to drink tea you’ve brewed. 😉

LOVE blackberries and we have a huge tangled bush of them on the side of our property. I did NOT know about the leaves. THANK YOU!

I love them too. So tasty! Thanks for stopping by. 🙂

I remember when I was a kid, I would go hunting for wild blackbarries with my father 🙂
Ah, those were days!

There are so many types of berries. I mix them up. 🙂

Blackberry tea? I don’t think that I’ve tasted it.
Now blackberry pie is a well-known dish.

Mixed berries are a thing of beauty. In Sweden, we have a jam which is equal amounts of blueberries mixed with raspberries. It’s called “queen jam”. 🙂

Have got blackberry jam on my shopping list for today! Will look out for the tea … thanks Sara, fascinating!

Enjoying the background info and the pictures are beautiful. I’ll be watching every day.

Thanks, Linda. Glad you’re enjoying it. 🙂