A to Z Herbarium: Dandelion 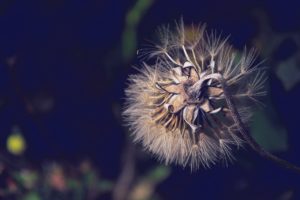 The leaf of the dandelion is used in summoning spirits, healing, purification, or overcoming negativity. The root is used in divination, wishes, and calling spirits. Drinking dandelion tea or coffee (in which the roots are roasted and ground) promotes psychic powers. Leaving a hot infusion by the bedside will call spirits.

Dandelion belongs to the goddess Hecate and is associated with the underworld and necromancy. It is beloved by bees, goats, and pigs.

To find out how long you will live, blow the seeds off the dandelion; however many seeds are left is how many years you’ll live. (So, asthma might be a good thing here…) To tell the time: blow three times on the seed head. However many seeds are left is the hour. To send a message to a loved one, blow on the seed head in his/her direction while visualizing the message.

When buried in the northwest corner of the house, dandelion will bring favorable winds.

The milk from dandelion stems is said to cure warts, and a tea made from dried leaves aids indigestion. A tincture made from the flowers will help with liver problems.

I remember as a child blowing the seed heads of dandelions. I also remember being told that picking dandelion flowers would cause us to accidentally pee in our pants!

I used to blow on the seed heads too all the time as a kid. I hadn’t heard about the peeing of one’s pants, though, haha.

We have tons of dandelions here in the Spring. The honeybees love dandelions because they are some of the first flowers of spring.

We get tons of dandelions here too. They are some of the first, yes, very prolific too, which probably helps. 🙂

Was always fascinated by the things you could do with dandelions in Enid Blyton stories! Didn’t know there was so much more.

I don’t think I’ve read any Enid Blyton stories. I’m now off to go look her up… 😉

I had never known dedelions had so many properties and were so powerful. This year they are particularly numerous here where I live. Don’t give me ideas! 😉

So many ideas! 😉 We get a lot of dandelions where I am too, but they haven’t bloomed yet. Need to give it another month or so.

Thank you for stopping by. 🙂

Nice to find this additional information about dandelions! My post today was about Dandelion Wine…great minds 🙂 Good luck with the A to Z Challenge.

Great minds, indeed! I’m off to go read your post about dandelion wine. 🙂 Good luck to you too!

Lovely Sara! When I pick a dandelion – (sometimes more profuse than at other times), I always blow on it and make a wish … I didn’t know there were more potentials and properties to it!

I knew the leaves were edible. That and the wish-making was the extent of my knowledge prior to this post. 🙂

So many possitive things associated with the Dandelion :). I’m afraid I’m still not fond of it as a flower though … there is just something about them I don’t like, until they go to seed, then they are very pretty 🙂
Tasha
Tasha’s Thinkings – Shapeshifters and Werewolves

Aww, but they are round and yellow! 😉 I do think they are lovely in flower form, especially in great numbers covering a green hillside as they do here in Sweden. When they go to seed, it doesn’t look nearly as nice on the hillside, in my opinion, but I love it when the wind kicks up and the seeds float through the air. It looks like a fairy realm. 🙂

Hi Sara – I knew the telling of the time story – but not the rest of the tales. I tried a dandelion drink one day – I didn’t enjoy it … but no doubt if that was all there was -I’d be happy! Cheers Hilary

I’ve heard dandelion wine is bitter, and I know the leaves are bitter. So, I’m going to guess the drink was bitter. 😉 It definitely does seem like an acquired taste.

I always loved blowing the tufts off dandelions as a kid. I had no idea they held such meaning!

I always made a wish when I did it, that was about the extent of my knowledge of dandelions. 🙂

I love dandelions, they are so pretty, and you can make chains from them… 😀

I’ve never learned how to make chains from flowers. I need to rectify this somehow.

Good to know that the tradition continues on. 🙂

and you can make a magenta dye too from dandelions with alum.

i love this post. it makes me happy for some reason. maybe because it is in season, so to speak.

and Hecate, she is one awesome goddess! one of my favorites to research.

Magenta dye from dandelions? Madness! But cool. 🙂 Thanks for that tidbit.

To me, dandelions are like little suns in the grass, so I can see how it could make one happy, and I’m glad that it has.

I’m not as familiar with Hecate as I’d like, but from what I do know, she seems really cool. 🙂

I stopped blowing on dandelions. Never made wishes, really. I just liked plucking and blowing, lol. 😀

But I’m shocked that root beer has dandelion roots. I haven’t had root beer in years!

I’ll pick one from time to time to blow on, just for the fun of it, but for the most part I also leave them alone.

I love root beer. I also haven’t had it for years, but that’s mostly because I gave up soda, and also because it’s difficult at best to find in Sweden. I’ve always wondered if modern root beer really does have roots in it or just “root flavoring” hehe. I imagine if you can find a quality brand, it might indeed have dandelions in it.

Need to gather some dandelions to make wine and send messages 🙂

So basically, if you’re having trouble with dandelions, borrow someone’s pig. 😉 LOL!

Yep! 😀 I’d actually love to have a pet pig, but then that led me to the question, where does one get a pet pig? 😉

I love dandelions. Always have and never understood why people went to such efforts to get rid of them. Then, I took a wild edibles class and learned to love them more, and then I got bees and … well, I didn’t think I could love this lovely little flower more, but I do. I didn’t know you could learn so much from the seed heads. I’m all about spreading more of them, so I’ll be doing this as soon as it dries up enough around here! Thanks for another great post!

I love them too, but then I also find immaculate green lawns a little bit boring. 😉 How fantastic that you keep bees! Good luck with spreading the joy/dandelions!

Interesting. Dandelions are all over where I live. I remember as a kid blowing the seeds around. (I don’t think that bit about how long you’ll live is very true because of that. I’d be long dead if so! LOL)

Same here about the “years to live” aspect of dandelions haha. I should have keeled over at about age six in that case. They grow all over here too, it’s lovely. 🙂

Interesting. There are dandelions all over the place where I live. 🙂

They grow in crazy amounts here too. It’s quite lovely. 🙂

This is interesting–I’ve learned something new. There are not nearly as many dandelions here as there was when i lived in the Upper Midwest.

I’ve never been to the Upper Midwest, but the pictures I’ve seen are lovely. 🙂

Heidi Kneale (Her Grace) - 5 years ago

Rather fond of dandelion in its many forms. I love their cheerful yellow flowers, delight in their floatiness when they go to seed, enjoy the diuretic properties of a dandelion tea and am soothed by a nice mocha when made with roasted dandelion root coffee.