A to Z Herbarium: Elder 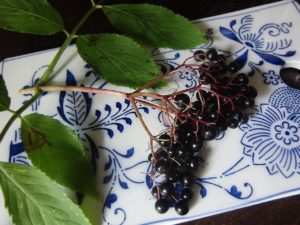 The elder tree is closely associated with faeries and otherworldly realms. The elder is symbolically feminine, and there is a myth of a guardian spirit residing in the tree. In Denmark she is called Hyldemoer (Elder-Mother), and in English lore she is called Old Lady or Old Girl. Prior to cutting an elder tree, one should ask permission to avoid bad luck by reciting, “Old Woman, give me some of thy wood and I will give thee some of mine when I grow into a tree.”

Elder trees planted near a house offer protection from negative influences and gives prosperity to the household. Placing elder sticks around the house will protect against robbers and snakes. Elderberry oil can be used in blessings. Pregnant women can kiss the tree for good fortune for the baby. If you fall asleep under an elder tree, then it is said you’ll dream of fairy lands. Fairies can be summoned by blowing on a flute made from elder wood. This is best done at midnight, in deserted places away from humans.

Carrying elder berries will protect against evil and negativity. Putting them under your pillow will help you sleep. Carrying elder will also protect you from the temptation to commit adultery.

Elderflower tea is used to treat a multitude of ailments, such as hot tea for tonsillitis and sinusitis; cold tea for night sweats and to lower fever. It was once believed that elder leaves picked on May Eve could be used to cure wounds, and that warts could be removed by rubbing them on a green elder stick and then burning or burying it. To cure a toothache, one can place an elder twig in the mouth, stick it on a wall and say, “Depart thou evil spirit!”

Note: Elderberry seeds are poisonous, so don’t eat those.

I had heard you had to ask permission to cut the branches of an elder tree, but I didn’t know there was a particular way to do it. Interesting– and, it strikes me, a little disingenuous. I mean, will the asker ever become a tree? It seems sneaky to me. I guess people becoming trees is a Thing in myth, though, so maybe…

Hehe. I like to think that when the permission-asking was customary, that maybe people believed one really would turn into a tree. I’d rather like to live in a society that believed these things. 😉

Wonderful information but I’d rather not sleep with berries beneath my pillow – the purply mess would be a nuisance! Ever practical me! Cheers Hilary

Elderberries under the pillow does sound awfully messy. 😛 And elderflower drinks are tasty!

Time for tea! Though I’m not sure about sleeping on the berries – besides the mess, it might invite ants into my bed 😉

Haha, true about the ants. Nobody needs ants in the bed!

Elderflower is one of my favourite flavours to add to mocktails ;P it goes very nicely with ginger ale and apple juice. We did have an elder tree next to our house, but it had to be felled this year, because it was undermining next door’s foundations 🙁
Sophie
Sophie’s Thoughts & Fumbles – Dragon Diaries

I’ve never had a mocktail, but ginger ale, apple juice, and elderflower sounds yummy. 😀 Sad about the tree. Did you ask it permission first? 😉

I remember the elder tree featuring in your Hazel and Holly stories Sara … so lovely to hear of the wonderful properties of it. I’ll look it out in a tea or dried berries for underneath my pillow … what a lovely feminine Elder-Mother she represents. Thank you ..

How fun that you remember it! This post made me think of it too, specifically how a spirit resides in the tree. I didn’t know that when I wrote the story. The Elder-Mother does indeed seem lovely. Thanks for stopping by! 🙂

Great post today. I didn’t know that they had nicknames for the elder tree. Old lady. That is cool.

Yeah, I thought it was pretty cool too. 🙂

I love the English folktale called The Elder Tree Witch (I also included it in my book). Also, my current pup is named Bodza (elder or elderberry) 🙂 In the summer, we make elder flower lemonade. Yum.

I definitely need to check out your book. Bodza is a cool name (and cool meaning!), and I love all forms of lemonade. Seriously, can’t go wrong.

I make elderberry wine each autumn and give to friends for Christmas. Delish!

Fabulous post with so much information. I’m definitely adding Elder to my list of plants to put in the garden and I so want to fall asleep under on and dream of fairies. Thanks for sharing.

How lovely! I hope your dreams are wonderful. Thanks for stopping by, Pamela. 🙂

I am liking this. Fun stuff.

I’ll be writing about elderberries in my letter H post. I absolutely love this gorgeous, healthful fruit — which my grandmother gathered to make wine and bake into pies.

I’ll have to be sure to read your H post. I’ve never had elderberry pie. Sounds tasty!

There something fascinating and funny about the elber floklore, all at the same time. I like the legend of the Old Girl, it’s kind of sweet 🙂

I got a new home with elder tree in front of my gate, I was so happy to meet it and it seemed too happy to see m also, each morning it gives me a bowl full of shite flowers. I made oils of it for my family and often times boil them for bathing. It’s so calming. I love it. I’m going to try the elder flower wine soon.
Thanks for this piece.