A to Z Herbarium: Fern 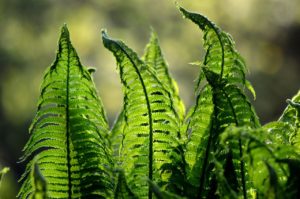 Back in the day, people didn’t know how ferns reproduced since they don’t have seeds, so this has led to some interesting folklore. In the Middle Ages, people believed ferns flowered and produced seeds at midnight on Midsummer’s Eve. But, since they couldn’t see said flowers or seeds, they believed them to be invisible. It was believed that if you witnessed the fern flowering or managed to collect the seeds, you could become invisible, see into the future, or be granted eternal youth.

Burning dried fern indoors will ward away evil spirits. Placing fern in vases with flowers has protective properties, as does planting it at the doorstep. Burning fern outdoors will bring rain, and the smoke will keep away snakes. Carrying or wearing fern will lead one to hidden treasure, while breaking the first fern of spring will bring good luck. Alternatively, biting down on the first fern of spring will ward off toothaches for a year.

Many different varieties of fern can be used to treat many different ailments, including arthritis, coughs, stomach aches, fever, pneumonia, infections, and snake bites, to name a few. Some ferns are poisonous though, so don’t go chomping on any random variety.

I wonder how many people have sat around on Midsummer’s Eve waiting to see invidible flowers and seeds? 🙂
Tasha
Tasha’s Thinkings – Shapeshifters and Werewolves

Probably a lot hehe. Maybe they turned it into a party. 😉

Best of all though, it looks beautiful! Thank you for giving us more of your really interesting facts – and fictions.

It is really beautiful. Thanks for coming by! 🙂

I love ferns, they are so pretty… Also, fern flower stories are very entertaining 🙂 We have some of those too in Hungary.

I love ferns too. The whole fern flower thing is pretty crazy. This was my first time hearing of it. 🙂

I have always loved the look a ferns, I think that they are beautiful. That was the extent of my knowledge though. I really enjoyed your post because I learned some interesting facts. Nicely written. Thanks you for sharing.

I also love ferns, and it’s always fun to learn new things. 😀 Thanks for stopping by.

Ah, if only my ferns will stop dying on me, then I can become invisible too… Happy A-to-Z-ing.

Yeah, I gave up on trying to grow ferns long ago. Now I just enjoy them when walking through the forest. 🙂

Boston ferns are excellent air cleaners. After Hurricane Katrina, folks in New Orleans got a cough from exposure to formaldehyde in temporary trailers. They were advised to place 10 Boston ferns in the trailer to clear the air — New Orleans having the perfect temperature and humidity for these helpful plants.

I didn’t know that about Hurricane Katrina and the ferns. It makes me want to give cultivating ferns another go. 🙂

Had no idea that ferns were so beneficial. Thank you for sharing how the plant can help people who have a variety of health issues.

Glad you enjoyed it, Ann. 🙂

It’s amazing the folklore that grows around plants to explain them. Invisibility sounds like a useful trick for humans, but not so much for flowers 🙂
Sophie
Sophie’s Thoughts & Fumbles – Dragon Diaries

Yeah, it does sound rather counterproductive for flowers hehe. Unless, maybe, you have invisible bees to see the invisible flowers? Who knows. 😉

Thanks Hilary. Ferns are definitely beautiful. 🙂

Ferns are amazing my great grandmother,s was on this cool Victorian pedestal. I remember it lasting for years before it died. We still have a cactus that is as old as my brothers and I.

That’s cool. All potted ferns should be on a Victorian pedestal. Sounds right. 🙂

I like ferns, they are pretty. This is interesting information.

Thanks, Michelle. I love ferns too. 😀

I love ferns, it makes me so sad that I appear to be unable to keep one. But I wont’ desist, especially after discovering all the many properties it has 😉

I’ve also got a black fern thumb. I’ve not tried since being here in Sweden though, so I might give it another chance. 😛

I’ve hiked through forests where the ground was covered in ferns (I can remember misty mornings with such hikes along the Appalachian Trail). They were magical. I didn’t realize that because you can’t see the seeds that people thought they had magical powers.

I’ve seen spots like that in forests as well, it really is magical. Crazy about the seeds, though, right? 😀

Unfurling ferns have always seem magical to me – but imagining “invisible” seeds just puts them over the top for me. I’d be one of those watching at midnight on Midsummer’s Eve, and hoping for invisibility myself.

Unfurling ferns do seem magical. Waiting for a glimpse of an invisible flower/seed sounds like it could be a fun night out, at any rate. Either that, or terribly boring. Depends on the company, I suppose. 😉