A to Z Herbarium: Heather 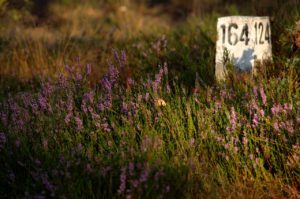 White heather is used for protection–particularly against rape and violent crimes–and for good luck. Red is used to start or end an affair; purple for spiritual development. Using heather at Samhain will invite spirits to visit, and burning it with fern outside will attract rain.

Heather has antiseptic and diuretic properties, and can be used to treat genitourinary ailments such as bladder and kidney infections. It’s also a soothing plant that can help with nervousness or insomnia. When turned into a liniment it can ease rheumatism or arthritis.

Heather branches have traditionally been used for thatching, stuffing mattresses, insulation, basketry, and making ropes and brooms. Musical pipes can be made out of the rootstock.

The flowering tops of the heather plant can be used to brew beer. 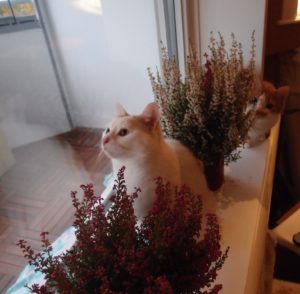 Heather beer is lovely 🙂 I wonder if it’s a comment on me that I focused on the alcohol from your post? ;P
Sophie
Sophie’s Thoughts & Fumbles – Dragon Diaries

I say it’s as good a point as any to focus on. 😉 I’ve never had heather beer, wouldn’t mind giving it a taste.

Hi Sara – interesting information re Heather and its uses … I’m sure it can be infused to add a ‘scent’ to some drinks etc, and obviously soaps and lotions … We have Roma or Gypsies sometimes in the streets offering tiny bunches of heather as good luck charms …

I think heather is so lovely. The cat picture is from when I tried to grow heather indoors… that didn’t really work out. 😉

The Pechs were known for brewing ale from heather… Other folklore creatures probably like the plant too 🙂 Happy A-to-Z-ing.

I find it interesting the range of ingredients from which one can (and does) make booze. 😉

I always remember my grannie having little cotton bags of heather to help her sleep. I’d rather have the beer myself!

One can have both! 😉

I didn’t know about white and red heather – I know only the purple one. Actually now I think about it, I’m confusing it with lavender … Interesting post thank you Sara!

Lavender is coming up for L! 😉

I love heather beer – and I have just noticed Soph said nearly the same thing. Makes us sounds like lushes 🙂
Tasha
Tasha’s Thinkings – Shapeshifters and Werewolves

My sister’s name is Heather (Hanga), so I have been collecting heather lore for a while 🙂 I’d like to try heather ale one day.

Thanks for the reminder about heather for sweet dreams! Must get some as soon as the season starts 🙂

You’re welcome! Would love to know if it works. 🙂

the elusive kitty beast! i love it! i died laughing.

heather properties and uses are new to me. pretty and functional.

Interesting information. It’s funny what kitties are attracted to isn’t it?

Cats are funny in their preferences. Right now Jasper’s (the brown kitty in the back) current favorite toy is a crumpled up receipt tossed on the floor. 😛

Greetings! Since I am recently experiencing a touch of arthritis, this is a welcomed post! Will try my hand at a Heather Liniment!

Hello! I hope the liniment works! 🙂

I have both those books (I kept borrowing my friend’s Encyclopedia till I finally broke down and bought my own copy 😛 ), I definitely need to read them more in-depth. Thanks for the info!

They’re good books and definitely worth having. Thanks for stopping by! 🙂

I love heather. Just a shamem that it is too hot where I live to keep it.
When I visited Irealnd, there heather was everywhere. Lovely.

Come to Sweden, we have heather! 😉 (I don’t get to say that about a lot of things hehe). It is very beautiful, though, I love it too.

Heather is so lovely. I’m inspired to try growing some this year. Maybe I’ll attract a kitty as charming as yours as well. 🙂

I’m thinking I’ll give growing heather a go when we manage to move into a house and I have a garden. My indoor attempt (as pictured above) didn’t work out. And, yes, if you’re lucky you might attract a kitty beast or two. 😉

I don’t know much about heather, but I always liked the name. Nice to learn more about it.