A to Z Herbarium: Juniper 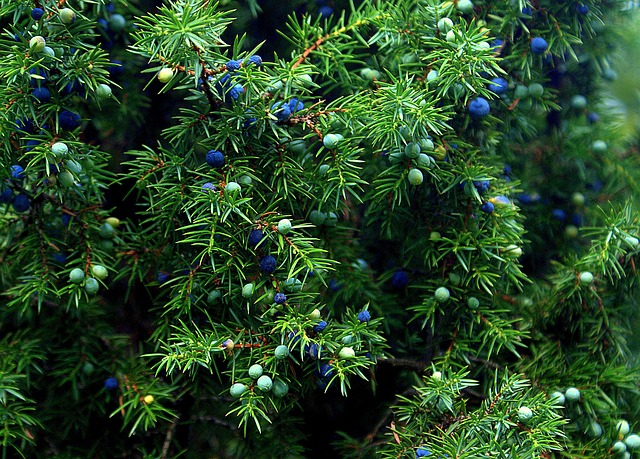 Juniper has been used throughout Europe as a protective herb. Wearing a sprig of the plant will protect against accidents and attacks by wild animals. It can be hung at the door to protect against evil forces and people. It also guards against theft, ghosts, and sickness.

Burning juniper will help psychic powers, break hexes and curses, as well as drive off snakes and aid in exorcism rites. It was also used as one of the earliest incenses by Mediterranean Witches and Celtic Druids. Juniper can be added to love mixtures, and the berries are believed to increase male potency.

Juniper can be used to treat a number of stomach and digestion ailments. The berries are also known to create uterine contractions and were once used to aid in labor. Similarly, these properties also made it possible to abort unwanted pregnancies. In the Middle Ages, giving birth “under the savin tree” (an older name for juniper) was a euphemism for juniper-induced miscarriage.

Juniper is also widely used in brewery. Historically, the berries have been used to flavor both gin and whiskey. In Sweden—dating back to the Viking Age and prior to the industrial revolution—juniper was used to brew a weak, everyday ale (meaning even the children drank it). Such ale was considered a poor man’s drink, whereas ale brewed with malt was of higher quality and reserved for special occasions.

Could be handy–one never knows about ghosts. 😉

Another plant that snakes don’t like so that’s going on my list to plant. Gin is becoming more and more popular in Scotland so I think there must be lots of Juniper around. Who knew it was such a useful plant.

Juniper is lovely, so hopefully it’ll work with the snakes.

Yum. I think juniper infused gin tastes delicious. I’m also always impressed how women from time immemorial have known what to do with unwanted pregnancies.

It is amazing the knowledge women have had through the ages.

Do the berries have vitamin C? WHen I lived out west, a friend used to make “Mormon Tea” (a sage-like plant that didn’t have caffeine but did have a very mild sudifed-type compound) with juniper berries. The “tea” was to clear sinuses, the berries for vitamin C.

They probably do, though I don’t know how much. Was the tea tasty?

I did know there were meant to be some magical properties to juniper but I didn’t know all the information here. Of course, all members of a family used to drink ale as a matter of course because the water usually wasn’t clean – so juniper would have come in handy in that respect!

You’re right of course about people drinking ale because of unclean water. I’d be interested in trying the juniper ale.

Wow, I did not know that about giving birth under the tree… O.O
It reminds me of the Grimm tale called The Juniper Tree. That’s quite the disturbing story.

I haven’t read that story. Though, coming from the Grimm’s, I can believe it’s disturbing. 😉

Wow I didn’t realize that’s what the saying about the savin tree meant. I learned something new! I like the smell of juniper, too.

26 Things To Hate About Writing: J is for Jealousy

Hi Sara – most of this I didn’t know – except the gin: knew that! Funny – I’d have said the tree was poisonous … but obviously not. Savin tree – I’d never heard that name … or its use …

I hadn’t heard of the savin tree either. Pretty fascinating though. And hooray for gin! 😉

I knew nothing of this! It’s incredible to consider how uses for juniper were tested and discovered. If I can be protected from theft, ghosts, and sickness, I’d sign up for it. Love this A to Z theme!
———-
Eli@CoachDaddy
J is for Justification for the Blog Life

It sounds like a pretty good deal, doesn’t it? Thanks, Eli! 🙂

I have heard of Juniper, but didn’t know it could be used in so many ways, including protection!
Glad to chance on your blog during this A to Z. Came over from Hilary’s blog. I am doing an AtoZ on Happiness this year. Do stop over some time.
Happy AtoZing!
Chicky @ http://www.mysteriouskaddu.com

Glad you managed to find me Kaddu! I will definitely swing by your blog. 🙂

Such fascinating info about juniper. I’ve been really attracted to it for the first time since winter when I was given some as part of a Yule bouquet. It’s lovely to learn a bit more about it.

Fascinating, particularly the juniper ale. Beyond that, it’s just such a gorgeous berry to see against the piney boughs.

I don’t think I knew any of these things about juniper! I’d known about it, but not how it could be used.

I was thinking of planting a Juniper, now I know I will plant one. Thank you for the information given in your post.

Thanks Sarah! I also like the little historical tidbits. 🙂

I’m in sudden need of a gin and tonic with lots of ice and a wedge of lime! Join me?