A to Z Herbarium: Mallow 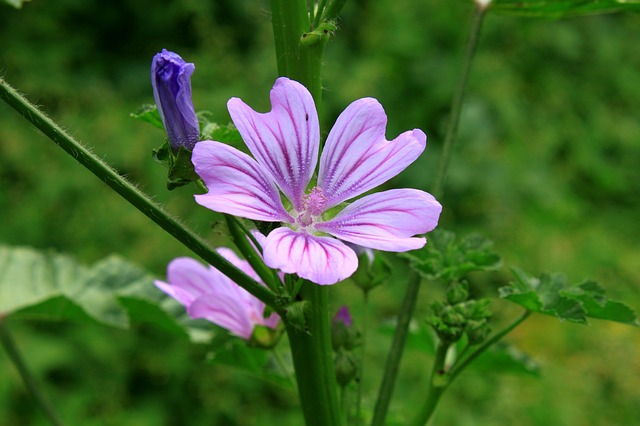 Carrying mallow will attract love. If a loved one has left you, then placing a vase of mallow outside your door or in a window will make them think of you, and they might return.

Burning mallow will cleanse an area, and anointing oneself with mallow oil protects against magic and demons. Mallow seeds gathered at night during a full moon can be made into an oil to promote fertility.

Mallow contains a fair amount of mucilage, which makes it soothing on areas of the body with mucus membranes, particularly the respiratory and digestive tracts. This makes mallow useful in treating ailments such as coughs, bronchitis, asthma, ulcers, inflammatory bowel conditions and general wounds.

When mixed into a lotion, mallow root is soothing for the skin. As a paste, it can soothe a sore throat. The root can also be used as a gentle laxative. As a poultice, it can help stave off gangrene.

Mallow leaves help stimulate the kidneys, and a strong tea of the leaves can help alleviate stones. The leaves as a poultice or ointment can be used to treat insect bites and stings.

The mucilaginous nature of the mallow root makes it an excellent thickening agent. The root sap (from the mallow plant malva sylvestris to be specific) was once used to make marshmallows—egg whites mixed with the sap and sugar, whipped into a meringue, then baked and cut into squares. They were originally used as a throat lozenge. A similar confection was made in Egypt using mallow sap and honey. Modern marshmallows are made with gelatin, and have unfortunately lost any medicinal qualities.

When the root is boiled with water, it takes on a consistency similar to egg whites and can be used as an egg white substitute. (Vegans take note.)

I don’t think I’ve ever heard of mallow before. This shows how out of touch I am, when it comes to the topic of herbs.

I don’t think it’s terribly well-known. Plus, there are so many herbs, one can’t be expected to know all of them. 😉

Quite a coincidence! I was listening to a play on the radio the other day and they spoke about collecting mallow from the countryside. I had never heard of it until that moment – then along you come with a basket of it!

It’s weird how that happens, isn’t it? Maybe the universe is trying to tell you something… 😉

It’s a shame that marshmallows no longer have actual mallow. I wonder what the taste difference is like?

I was wondering that as well. I like to imagine it as a slightly herby meringue, but who knows. 🙂 Thank you!

I’d only heard of marshmallow and hadn’t given a thought to how it’s made. Shame there’s no health-based excuse to eat it anymore!

Indeed! Though, I never was a huge fan of marshmallows. Maybe I’d like the herby ones better. 😉

Honestly, I think we should go back baking marshmellow the way we used to (Oh, that’s where the name comes from, then!)

I love your posts so much as they have so much great information. When I eventually get my own garden it will be full of all the plants you’ve written about. As a vegetarian I can’t have most marshmallows due to the gelatine so maybe I’ll have to investigate the old recipe.

Thanks, Pamela. There are a few “classic” marshmallow recipes floating around on the ‘Net. I’m not sure how authentic they are, but it’s a starting point. 🙂

Mallows are pretty flowers. I confess I was clueless that marshmallows were originally made from them. I’m curious as to what they tasted like.

I’m wondering too. If I ever find mallow root, I might give it a try! 🙂

I take Marshmallow Root for my IC. This helps explain why it’s recommended.

That is interesting. Glad I could shed a little light. 🙂

Hi Sara – it’s the Marsh Mallow that’s used for making marsh mallows – I learnt that when I wrote about the British Coasts … see my post – if anyone’s interested. But it’s such a pretty wildflower with lots of uses … cheers and have a happy Easter – Hilary

Interesting. Have I made a mistake between mallow and marshmallow? I honestly thought they were the same thing. I’ll have to follow up on that. 🙂

OK, from what I can tell, Marsh Mallow is Malva Sylvestris, which is what my herb book simply refers to as Mallow. So, in this case it looks to be the same thing. However, it looks like “mallow” can refer to different species of mallow, which may or may not be the Marsh Mallow kind, AKA, Malva Sylvestris. I’ve updated the post to add that specification for marshmallows. 🙂

“anointing oneself with mallow oil protects against magic” Ooh, now I know how to fix a plothole in my WIP! Awesome. Thanks, Sara 🙂

OOOH! So that’s where marshmallow comes from! I always wondered…

What a pretty flower – and such a rich history they have. Thanks for all these fascinating posts Sara.

They are quite lovely. Thanks for reading, Susan. 🙂

Your posts transport me to Hogwarts castle. Snape’s dungeon classroom, to be precise! 😛

I’d never heard of Mallow before. And while I wouldn’t want to use it to bring the ex back, it sure would be great to use it for its mucilage benefits. I’m thinking it could work for sinusitis too, right?

It’s possible it could work for sinusitis, I’d do more research though, just to be sure. Glad I could transport you to Hogwarts! 😀