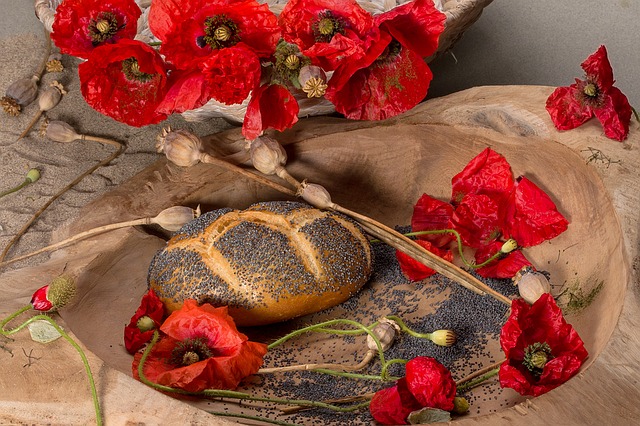 A to Z Herbarium: Poppy

Poppies are associated with sleep and death, in a relationship that dates back to ancient Greece. The flower is the symbol of Hypnos, the god of sleep, and grows in his Underworld cave along the river Lethe (“forgetfulness”). He is the son of Nyx (“night”) and Erebus (“darkness”), and brother to Thanatos (“death”).

Poppies are also associated with Demeter, the goddess of fertility, agriculture and harvest. When her daughter Persephone was abducted, the gods gave Demeter a poppy to help her sleep. Afterwards, the flower sprang from her footsteps wherever she walked.

So it is perhaps unsurprising that poppies are used in both sleep mixtures and fertility spells. Carrying or eating poppies promotes fertility and attracts both love and money. Seeds are added to food to induce love, or used in love sachets.

To become invisible: soak poppy seeds in wine for fifteen days. Then, while fasting, drink the wine every day for five days. Allegedly, if you do this, you will be able to make yourself invisible at will.

Opium (from Greek opion meaning “poppy juice”) is made from the sap of a seed pod of the opium poppy. It is a powerful pain reliever and has been used as such since ancient Greek and Roman times. Morphine, the principal component of opium, was first extracted from opium resin in 1803, and is ten times more powerful than processed opium. Codeine is another component of opium and is often used in medicines as a cough suppressant. All opiate drugs are highly addictive and should not be taken without doctor supervision.

Poppy seeds are commonly used in cooking, and although they do contain some opium, it is a very small amount and the seeds are safe to eat. However, it’s possible they may cause you to test positive on a drug screen, so you might want to pass on the poppy seed muffin if you’re expecting to be tested.

Poppies are among my favourite flowers. I love their colour and the way they cluster in this season. Their patches of red make me feel spring has finally come.

I also like poppy seeds in food, especially cakes. Thanks for the tips. I dont’ expect to be tested for drugs any time soon… but you never know 😉

Hi Sara – the poppies on the fields of WW1 are the things I remember and we get fields of poppies here on the South Downs … but I do enjoy a poppy seed roll – though I rarely touch bread.

It’s incredible how humans find out things isn’t it … to think morphine was found 200 years ago … yet opium has been around for much longer … fascinating facts – thanks .. cheers Hilary

It is pretty amazing the things humans figure out, like what’s poisonous and what’s not. Trial and error, I suppose? Wouldn’t want to be on the error side… 😉

Heidi Kneale (Her Grace) - 5 years ago

We have poppies in Australia. I’m very fond of their cheerful red faces.

Currently codeine is available over-the-counter in pharmacies here, but the law is changing and by next year, will be prescription only, alas.

Heidi (Her Grace) from Romance Spinners

Crazy that it’s over-the-counter. Get it while it lasts, eh? 😉 Poppies are rather cheery.

I like the idea of becoming invisible at will… Happy A-to-Z-ing.

It would be handy!

I’ve seen fields of poppies in California and they’re beautiful. I have also heard about poppy seeds and drug test but never knew anyone who passed positive… There are times I’d like to be invisible but I don’t think I’ll try this. 😉

I’m from California, so that’s what poppies will always make me think of. 🙂

Poppies are such spectacular beauties, and to watch a field of them dancing in the breeze is pure delight. I’d forgotten about their connection to Demeter. I probably shouldn’t have read this before breakfast – now I want a poppy seed roll.

I haven’t had breakfast either. A poppy seed roll would hit the spot. 😉

And of course there is also the scene from Wizard of Oz where Dorothy and crew fall asleep in the field of poppies 🙂 I love the look of these flowers. Too bad that “invisible” recipe is likely just a myth 😉

Yep. I remember as a kid I never understood why the poppies made them sleepy. Now I know!

i didn’t know the association between poppies and hypnos or demeter. I wish i could find more info on thanatos though because he intrigues me. Hades was a happening place. all sorts of people were hanging out there. paints a different picture than all that doom and gloom that gets associated with it.

It does seem like a happening place haha. While researching this post, I kept thinking that a cave filled with poppies by a river sounds quite lovely…

There is a hillside near me that becomes totally red with poppies when they are in season. Sheep wander around up there – now I know why they always look a bit wobbly!

I wonder what sheep dream of… 😉

Poppy seeds are banned in the Gulf (for obvious reasons) but we use these to make delicious curries in India.
When we were little, my grandmother used to make this milk drink (for the cold winter nights in the North) with crushed poppy seeds (soaked and mashed up in a mortar) and pistachios and almonds and a bit or turmeric and lots of sugar and a pinch of black pepper. It kept us free of colds, coughs and sniffles all through the winter. And we slept like babies:)
Thank you for the Greek facts.
P is for Poetry, Petra and Pottery

My hubby loves those buns with poppy seeds on them. Me, not so much. It’s amazing how herbs and such can have healing or helpful properties in smaller doses and dangerous ones at higher doses, eh?

It is pretty amazing. The line between help and harm seems to be thin at times.

I knew most of the associations, but not invisibility. Wonder how that came in?

Yeah, who knows about the invisibility. Maybe a side effect of the opium? 😉

This is a fascinating topic and read. I grow poppies. They bloom every May, and I cannot help but capture them in photo. I make sure to scatter their seeds to re-grow, too.Thanks for this.I am following!
Put a Little Love in Your Heart
Annie at ~McGuffy’s Reader~

How wonderful that you grow poppies. You must have many lovely pictures. 🙂 Thanks for following!

Lovely post Sara thank you! Poppies are especially beautiful, nothing more delightful than seeing their bright faces dancing in the breeze. I’m glad Hilary mentioned about poppies in memory of WW1. Thanks also for the reminder of the myth.

As a nurse, the byproducts of poppies is something I’m very familiar with and how useful they are for people in serious pain. I think after drinking that solution that had rested for 15 days anyone would think that they were invisible. Interesting fact, Tasmania (where I’m originally from) produces 25% of the world’s medical grade poppies.

I didn’t know that about Tasmania. Very cool! And, yeah, you’re probably right about the boozy mixture hehe! 😛

There are many traditional Hungarian pastries that require poppy seeds (also, pasta. We eat them with pasta.). I remember American friends visiting my grandparents’ garden and being stunned that they had a small poppy field… 😀