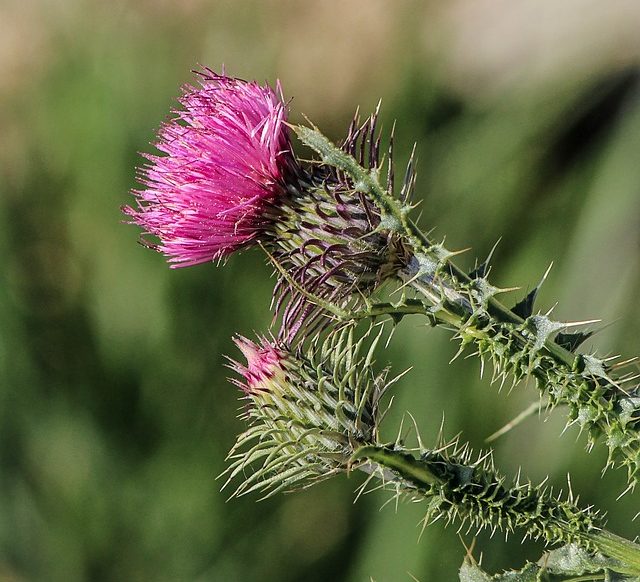 A to Z Herbarium: Thistle

When grown in the garden, thistles protect against thieves. When grown in a pot on the doorstep, they protect against evil. Throw thistle onto a fire to protect the house from lightning. Carrying a thistle blossom will protect the bearer. Carrying any part of the thistle will provide energy and strength, and stave off melancholy. Men who carry thistles will apparently become better lovers.

If a spell has been cast against you, wear a shirt made of thistle fibers to break it. Hex-breaking poppets are stuffed with thistles. When strewn in the home, thistles will exorcise evil.

The Anglo Saxons believed that if a man hung milk thistle around his neck, then all the snakes around him would begin fighting.

Milk thistle seeds are believed to be beneficial for the liver, and have been used to treat liver ailments such as jaundice, hepatitis, and cirrhosis, particularly in Germany since the nineteenth century. The heads of the thistle were once boiled and eaten like an artichoke.

Blessed thistle (or holy thistle), has been used since the Middle Ages as a digestive stimulant, purifying tonic, and eaten as a vegetable. It’s also been used to help nursing mothers, as its believed to increase milk production. Blessed thistle acts as an emmenagogue (stimulates blood flow in the pelvic region and uterus), and can help with menstruation problems in women. However, for this reason, pregnant women should not use it.

Hi Sara – I love seeing thistles and they have a lot of history with Scotland – being the National Flower. Thanks for all the extra notes … cheers Hilary

Yeah, I saw that about Scotland in my research. It’s pretty neat. 🙂

I imagine them being rather artichoke-y, as artichokes are a kind of thistle, after all.

Some of these facts I knew and some I didn’t, so I’m definitely learning! Thanks for that! 😀

Well, artichokes are a type of thistle, so it’s not so odd. Glad you enjoyed the post! 🙂

I was researching thistle once and was surprised to find out how many varieties there are. Some of them are quite lovely, but I can understand how they’re thought to be a deterrent against thieves – who wants to get poked, stuck, or burred.

Now I have to research how to make thistle fiber to make cloth. Hummm.

That would be cool if you figured it out. 😀

At school this morning, my little pupil and I were reading about the mouse that landed on a thistle bush picture depicted exactly as yours – and how that saved him from something FAR worse … 🙂 Interesting post thanks Sara

I haven’t heard that story. Loved how it fits in with today’s post though. It’s fun when that happens. 🙂

You know, if it was nettles you were talking about, I’d think of the story of the Wild Swans, whose sister removed the spell on them by knitting the shirts to throw over them… That certainly broke the spell! Still, a fascinating plant, thanks for sharing!

Seems like there’s much magic to be had in shirts made out of prickly things. 🙂

Interesting! I never realized thistle was even edible…

Could be handy if you’re stranded somewhere… 😉

I’ve only vaguely heard of thistle. Didn’t know it was so useful. Will have to look up its Hindi name.
Happy AtoZing, Sara!
Chicky @ http://www.mysteriouskaddu.com

I’d be interested in knowing its Hindi name too. 🙂 Happy A to Z!

Now, I can see that thistles can very practically protect from thieves in a garden – imaging a burglar trying to get through a patch of thistles at night in order to rob the house 🙂
Sophie
Sophie’s Thoughts & Fumbles – Dragon Diaries

Yeah, just seeing a bramble of thistles might be a deterrent. 😛

Thistles are absolutely lovely, even if they sting when you get up close! My mom gave me a silver necklace depicting a thistle that she got on a trip to Scotland. I love to wear it…and now it will have whole new meaning thanks to the thistle lore in your post!

They do have a certain beauty about them, especially when they flower with purple blossoms. Love that you have a thistle necklace. 🙂

Think of thistles, and until now I’ve only thought of Scotland! Once again I’ve learned a lot I never knew..

Always fun to learn, at least I think so. 🙂

Never knew they could be eaten. Getting snakes to fight each other does seem like a smart way of defeating them, if that’s the aim.

I’m not sure what the snake-fighting aim is. I found it rather bizarre. 😛

This is very interesting. I know that animals eat thistle. This is really a great series! Thanks for sharing it.
Tapestry
Annie at ~McGuffy’s Reader~

I find it amazing that animals can eat it, what with the prickles and all.

Thistles are so lovely in their prickly stubbornness. I loved reading about all the uses for thistles, practical and in the sphere of warding off evil.

They do have a unique kind of beauty, don’t they? Glad you enjoyed the post. 🙂

“…thistles protect against thieves.” Now I’m picturing these thieves caught in a bushy tangle of thistles which are piercing them from all directions! LOL
Thistles make think of thorns and vegetation growing wild and rampant. Which is a misconception…I know.

In California, I seem to recall there being patches of land being completely overtaken by thistles (and not the pretty purple kind in the photo), which wasn’t very nice. Here in Sweden, they’re not as sprawling, and lovely in a way. The bees here seem to really enjoy thistle blossoms (which are similar to the one in the photo).

Thistles make me think of thorns…sorry about the typo…

I didn’t even notice on my first read-through. 😉

This is one of those plants I know, I’ve seen in books and on the net… but I don’t think I’ve ever encounter in real life.
How weird…

That does seem weird. I wonder if you have encountered them, but just never noticed. If they’re not flowering, they’re really quite unremarkable looking. Or… you’ve led a thistle free life! 😉

The cynic in me agrees. a garden full of thistles might keep away thieves as there would be nothing they’d want to steal.

Unless they want to steal the thistle for, I don’t know, crazy snake fighting tournaments or something… 😛

We’ve got lots of protection here in Scotland with thistles being a regular part of gardens. I’m not sure how easy these ones would be to carry as they’re a little prickly. Again with the snakes though I do love the thought of all the snakes fighting.

I thought the snake fighting detail an odd “perk”. At least I assume it’s a perk. I don’t know, really haha. I’m glad you’re well protected there in Scotland! 😉