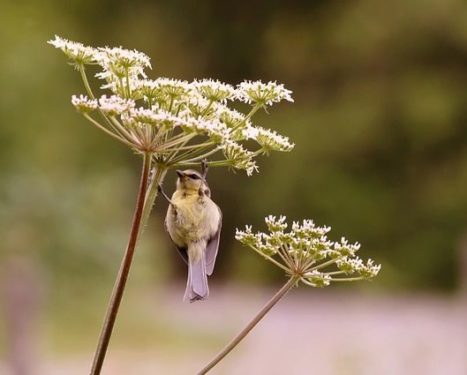 Yarrow offers protection when worn, and courage when held in the hand. Carrying yarrow will also attract the attention of those you most want to see. Dried yarrow hung over the bed or used in wedding decorations ensures that love will last for at least seven years.

Yarrow can be used to exorcise evil and negativity from people, places, or things. (Basically, all nouns.)

Yarrow is apparently helpful in treating numerous ailments all throughout the body. The most common, however, seem to be drinking yarrow tea for colds and to help break fevers. One suggested tea blend for colds and flu is yarrow, peppermint, and elderflower, to be drunk as soon as the cold or flu is coming on. Yarrow is also supposed to be good for healing wounds, promote good circulation and digestion, as well treating ailments surrounding the urinary and reproductive systems—particularly for women.

Yarrow (and other herbs) was once used to brew a type of beer called gruit in the days before hops. This practice was largely phased out after the sixteenth century, though gruit brewing still happens today. In fact, there is an International Gruit Day (#gruitday for those inclined toward hashtaggery) that takes place Feb. 1. Good times.

A to Z Herbarium: Xue Jie

I have never heard of gruit before. Have to go look it up 🙂

I find the word quite satisfying. 😉

I often carry yarrow in my hand, because I can’t resist plucking it when I’m out walking! Now I know why I always do brave things like jumping ditches and climbing fences!

Yarrow seems to be another one of those “umbrella” herbs that covers all a wide variety of issues. In fact, the photo you used makes me smile – it looks a bit like our avian friend is under an umbrella.

Yeah, I really liked the photo even though it kind of seems to be more about the bird than the yarrow, but I’m OK with that. 😉

We have a great local spot, Urban Farm Fermentory, that makes kombucha and gruit beer. They have interesting flavors. It’s a fun tasting room. WeekendsInMaine

That’s pretty cool. I does indeed sound like a fun tasting room. 😀

Yarrow is fabulous to click. Bees seem to love its flowers and one can get lovely close-ups of the bees and the flower.
Y is for Yellow

And of birds, apparently, judging by the photo. 😉

Yarrow is such a beautiful plant to have in the garden. Now to see if I can get psychic powers from drinking tea 😉 Happy A-to-Z-ing.

I will have to find yarrow… does it grow in hot and humid weather? I am not sure I would know it (but it kind of looks like Queen Anne’s Lace from your pic, but it must be sturdy to hold up the bird).

I am enjoying your blog and its insights into herbs.

I’m not sure what kind of weather it grows in. We have Queen Anne’s Lace where I live, and I thought for a while it might be yarrow. But, no, it’s not. 😛 They do look quite similar

Yarrow is new to me…
I smiled when I read ‘those inclined toward hashtaggery’ Is hashtaggery the official word? Does make sense, though…

I vote to make hashtaggery an official word. Right up there with haberdashery, and, uh, that’s all I got. 😉

Yarrow is a herb I have heard about but never used. I appear to be missing out.

Probably not missing out on too much. Plus, there are plenty of herbs out there to have fun with. 🙂

Haven’t tried growing it yet, maybe one day. It looks related to dill and fennel in the flower shape.

Hey, it does kind of look like a dill/fennel flower. I wonder if they’re related…

Barbara In Caneyhead - 5 years ago

I had heard of yarrow, but knew none of the details. Love the term “hashtaggery”!
Perspectives at Life & Faith in Caneyhead

Thanks Barbara. It’s always fun to make up words. 😉

Great – yarrow stalks used in divination as in the IChing? Well, I’m pleased to see a picture of yarrow as I’ve often wondered .. thanks Sara!

Is it used for I Ching? That would be pretty cool.

Another herb that covers all the bases. Never knew about gruit – presumably it tastes different to the tea!

Presumably, but one never knows until one tries it. 😉

Hi Sara – I knew about Yarrow – but I probably should have been told about the bed scenario a few decades ago! We have it or let it be around in the verges of gardens and countryside as it attracts butterflies … gruit sounds as though it could be quite intoxicating … cheers Hilary

It’s funny about the hanging yarrow over the bed, because I’m thinking, “OK seven years of love, then what?” If you need an herb to make it work, maybe it’s overrated. 😉 I wish we had yarrow around here. Of course, maybe we do, and I just haven’t seen it. I will have to keep a look out!