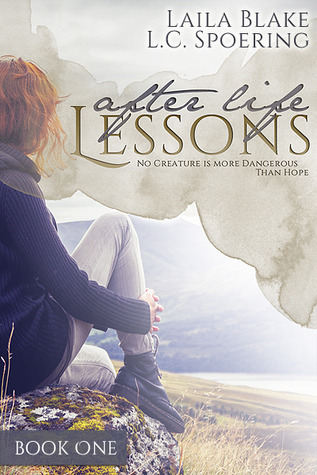 After Life Lessons is an interesting, dysfunctional kind of love story, and with zombies to boot. Sort of. Despite the zombie-apocalypse setting, the zombies themselves don’t play a particularly large roll. So if you’re looking for a book with a lot of zombie action, then this isn’t the book for you.

What I enjoyed most in this book was the beginning, when Emily was so broken and detached from the world. I should have liked her journey into finding love again, but that part for me just wasn’t as compelling. I think my biggest problem with this book is I’ve had a difficult time separating myself from what it could have been. “No creature is more dangerous than hope,” is what it says on the cover. For me, that brought up images of a character afraid to trust, afraid to feel hope for fear of losing it again. It makes it sound like hope is the true nemesis, rather than the zombies. And so, when Emily began regaining her trust and her hope in life, I kept expecting something to happen that would take that from her. I wanted that to happen, because I wanted to see how she would cope. But it never did, not in any meaningful way.

What this book focuses the most on is the relationship between the two main characters, Emily and Aaron. While the interaction between them was interesting for the most part, the whole thing just felt kind of shallow. I mean, it’s essentially the end of the world. Neither Emily nor Aaron has had much human contact since everything went down. It seems kind of inevitable that they would develop strong feelings for one another. So when they did, it didn’t really feel significant or important. Maybe I’m just not convinced that the characters really did love one another, and instead mistook their own need for each other to survive as love. And that’s OK, really. Honestly, in that situation, I don’t think anyone would be able to tell the difference.

Despite the book being not quite what I expected, and despite some awkward narrative moments (“sorry” was spoken so much that it lost all meaning by the end) it was still an interesting book and fairly easy to read. And even though I kept rooting for someone to die, I still cared about the characters for the most part. They are flawed and sometimes annoying, but that is what makes them real. That, I think, is where the real strength in this book lies.