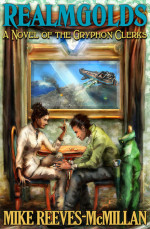 I received a free copy of this book in exchange for an honest review.

Realmgolds is a steampunk fantasy novel about Determined, the Realmgold of Denning, who is forced to contend with the eruption of a civil war within his borders. He receives guidance and assistance from Victory, Realmgold of neighboring Koskant. However, a magical treaty prevents anyone from Koskant crossing Denning’s border under arms, so Determined and Victory need to get clever in how they tackle the uprising.

Despite that there is a war going on, this book is pleasantly low-action. Most of what takes place is “behind the scenes”, focusing more on the people making the decisions than those carrying them out. While I appreciate the idea of it, the execution, for me, fell flat. For a story focusing on people, there was surprisingly little character development. Far too infrequently were we allowed in Determined’s head to find out what made him tick. He tackled each problem as it came up with rarely an indication of what he was feeling. This made it very difficult for me to get more than a vague idea of what he was like, and that’s a shame because it made me not care – about him or the story.

The writing was competent, though there was far too much “telling” and not enough “showing” for my taste. The result was a flattened narrative that made me feel as though I was reading a very long newspaper article rather than an engaging novel. This, combined with the emotionally distant characters, made the reading laborious.

The world was interesting and well conceived. I liked how magic and high fantasy races were married into a technological world, which gave the setting a freshness that is sometimes lacking in fantasy novels. There is also a depth to the world that is hinted at in the story, leaving plenty for future novels to expand upon. This is a good thing. For, despite the story’s shortcomings, the potential is there. I hope Mike Reeves-McMillan takes that potential and runs with it. Even if his books aren’t for me, it will be interesting to see what he does next.