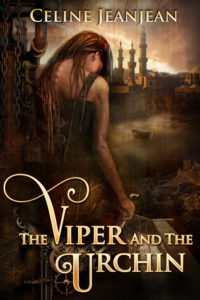 The Viper and the Urchin

Book source: Received an advance copy of the book by the author in exchange for an honest review.

“You see, while these little people are beneath us, we can still grant them the small respect of being impeccably groomed as we witness their final moments.” — Longinus Pendergast

Let me just say that I pretty much fell in love with Longinus from the synopsis alone. An assassin who’s afraid of blood? I knew from that moment that this was a book I needed to read.

Well, Longinus, and the book, did not disappoint. In fact, I’d say they both exceeded my expectations. Right from the opening pages, I was sitting there grinning like a fool as Longinus performs one of his famed assassinations–with all its unexpected flair. He is a man with a muse, and when the muse speaks, one must always listen, even while offing hapless victims, it seems.

He is also a man of refinement, and of unabashed self-importance who’s not afraid to show open contempt for those whom he deems beneath him, which, incidentally, is almost everyone. That kind of snobbery is incredibly entertaining, and so the bulk of my reading experience was me lounging around, giggling and grinning and thoroughly enjoying pretty much every minute of this novel.

Yet Longinus isn’t the only protagonist of the story—he shares that honor with Rory, a scrappy young urchin gal who’s got about as much refinement as a mud-clad goat. Story magic happens when these two characters are thrown together to create a dynamic that’s both entertaining as well as touching. Because beneath Longinus’ bluster and Rory’s sarcastic sass are two characters with great big hearts, who are just trying to survive in a rather cruel world as best they can.

I feel like a subtitle for this book should be “Rise of the Underdogs” or something like that, because that’s pretty much what this story is. It’s a story of two downtrodden characters and their struggle in life—both against their own personal demons as well as against all the crap the world throws at them. And in a city like Damsport, there’s definitely a lot of crap being flung around (figuratively, of course, though I’d not be surprised if it also happened literally—Damsport just seems like that kind of place).

Now, I’m not always a fan of city settings, and perhaps less so of tropical ones, so that was probably my biggest reservation when I started reading this book. But it works. And I think it works partially from the imaginative steampunk elements (Crazy Willy was just brilliant), as well as the evocative descriptions that anchor you in the story. Whether it was running along the rooftops with Rory, or struggling to navigate through a crowded market—I felt like I was there, and it was a city I’d never seen before, and that’s pretty magical.

All in all, a very enjoyable book. It’s funny, it’s endearing, and it’s well worth a read.

Being Damsport’s most elegant assassin is hard work. There’s tailoring to consider, devilish poisons to concoct, secret identities to maintain… But most importantly, Longinus has to keep his fear of blood hidden or his reputation will be ruined. So, when a scrawny urchin girl threatens to expose his phobia unless he teaches her swordsmanship, he has no choice but to comply.

It doesn’t take long for Rory to realise that her new trainer has more eccentricities than she has fleas. But she’ll put up with anything, no matter how frustrating, to become a swordswoman like her childhood hero.

What she’s not prepared for is a copycat assassin who seeks to replace Longinus, and who hires Rory’s old partner in crime to do away with her, as well. Rory and Longinus must set their differences aside and try to work together if they’re to stop the copycat. But darker forces than they realise are at play, and with time running out, the unlikely duo find themselves the last line of defence against a powerful enemy who seeks to bring Damsport to its knees.

The Viper and the Urchin is a standalone novel that is part of the Bloodless Assassin Mysteries.

The book is currently available for preorder at Amazon at a bargain price of $0.99. So, like, go get it now.

I had actually planned to add a tagline saying it’s a story of two misfits but I was worried it wouldn’t work. From your idea for the subtitle maybe I should revisit that idea! Thank you again for a wonderful review Sara.

I loved the story! They are definitely a pair of misfits. I think the tagline could work. I’m happy to give you some feedback if you’re struggling to get a tagline that sounds good (I don’t know how helpful I’ll be, but I know how valuable it is to get feedback on stuff like that).

And my pleasure! Thank you for sending me a copy of the book. 🙂

I want to read this now!

You should totally read it. The Kindle version is super cheap right now, and it will be released next week!

So happy you like the sound of the book Melissa!! 🙂

I am definitely going to preorder this. The idea of an assassin being afraid of blood is such a unique concept I have to read it just to see how what happens and how he manages. 🙂

He was definitely my favorite character, and his fear of blood was one of the reasons. It’s a really fun book, hopefully you’ll enjoy it as much as I did. 😀

Haven’t finished the book yet, but I’m enjoying it a lot. I’m just past the middle point and now it’s getting really really intersting becasue I lot of mysteries are surfacing. Can’t wait to see where it will bring me 🙂

Yeah, the mystery aspect of the book was fun. It felt like a good caper, and I don’t usually read many capers (and now I’m having fun typing the word “caper”…). 😛

Has the word lost all meaning? 😉

Yay!! This is great I feel like I’m getting gradual updates as you progress through the book! ;-p Very pleased you’re still having fun with the story 🙂

Great Review Sara. A mismatched pair of misfits… what could go wrong? 😀

I know, right? I’m imagining a tide of chaos left in the wake of their squabbling, with them completely oblivious about it. 😉