I’ve always considered myself a cat person. When I imagine myself in my elder years, I see myself as the crazy lady that pushes a cat around in a pram. Assuming the cat would stay in the pram of course, which it probably wouldn’t. But hey, realism isn’t a requirement in my daydreams.

So I thought, “What fun to do a post about the magical nature of cats.” Because there is a magical nature to cats. I’m thinking ancient Egypt and their worship of the almighty kitty. Stuff like that. Little did I realize that the research would lead to me having to read about all the horrible things people have done to cats through the ages in the name of magic and superstition. And I had a moment of regretting my choice.

Then that made me grumpy. Because cats are awesome. Cats are magical. So I decided to press on and see if I could put together a post about the magical nature of cats that didn’t make me hate humans.

It’s well-known that cats were revered in ancient Egypt, and the goddess Bastet (depicted as either a cat or as a woman with a cat head) was one of the more popular among the Egyptian pantheon. She was the goddess of hearth and home, a protector of women’s secrets, and a guardian against evil spirits and disease. China also had a cat goddess called Li Shou, and sacrifices made to her were in the name of pest control and fertility. 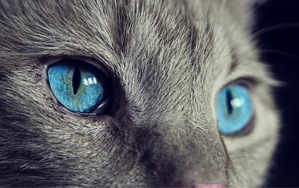 Cats have a connection with the moon. Both in terms of their nocturnal habits, as well as the changeable nature of their eyes. Or rather, their pupils, which are mere slits during the day, but at night become wide open orbs not unlike the moon. Freya, the Scandinavian goddess of fertility, rode a chariot drawn by cats. This honor was bestowed on them due to their beautiful moon-like eyes. Perhaps this moon connection is where Lewis Carrol got his idea for the Cheshire Cat, and his smile that hangs in the sky after he’s gone like a crescent moon.

But that’s not the only connection to the natural world that cats have. It was once believed that cats could forecast the weather based on their behavior. If cats scamper around wildly, it means windy weather is ahead. Rain if they wash their ears. If they sit with their backs to the fire, then frost or snow is coming.

Cats sneezing is a whole different kettle of auguring fish. If a cat sneezes near a bride on her wedding morning, then she’s destined for a happy marriage. But a cat sneezing at any other time could portend rain (I’m still scratching my head on the sneezing/marriage/rain connection here). If a cat sneezes three times in quick succession, then the whole household will likely come down with colds. 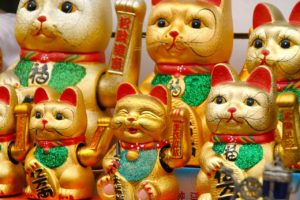 In Japan, the maneki neko, or “beckoning cat” (you know, the little statuette with a raised paw) represents the goddess of mercy and remains a symbol of good luck even in the present day. The story goes that a cat was sitting outside the temple of Gotoku-ji when the Emperor walked by. The cat raised its paw in acknowledgment, and so the Emperor decided to visit the temple. Moments later, lightning struck where the Emperor had stood, and so it’s said that the cat saved his life. Personally, I think it sounds like the Emperor would probably have just kept on walking if the cat hadn’t been there and would’ve avoided the lightning anyway, but that doesn’t make for a cool story. In the spirit of cats foretelling weather, I wonder if this means that a cat’s raised paw portends lightning…

Cats were also considered lucky among sailors, and any cat that boarded a ship would bring it good luck. And because cats are apparently the Masters of Weather, they were believed to be good weather guides. If a ship was becalmed, then wind could be raised by placing a cat under a pot. And woe to the poor saps that threw a cat overboard, as it would undoubtedly bring on a storm.

Cats ruling the world. No, really.

In China there’s a myth where the gods, after having created the world, decided to appoint cats to oversee their creation. The gods granted the cats powers of speech so as not to have any misunderstandings in communication. The cats, however, were much more interested in napping and playing underneath the cherry trees than dealing with the mundane business of running a world.

Three times the gods came down to check on their creation and each time found the cats asleep or playing. On the third visit, the cats explained to the gods that they weren’t interested in overseeing the world and nominated humans for the job. (Thanks, cats…)

And so the power of speech was taken from the cats and given to humans. But given that humans seemed incapable of understanding the words of the gods, cats remained entrusted with the task of keeping time and maintaining order. There is a belief that still holds today in China that one can tell time by looking at a cat’s eyes.

So, the laid back (ahem lazy) nature of cats is the reason why we don’t have cat overlords today.

I love the Chinese story – and what do you mean we don’t have cat overlords – they may not be able to speak, but they still rule the roost ;P

Haha! That’s true. I was thinking of something more overt, but that’s really not the cats’ way, is it? 😉

Lucky cats! I have one of those, raised paw and all.
I also have one that definitely keeps the time. Woe to me if I attempt to oversleep.

Fun stuff. I like cats, and my family has had cats over the years. My mom has pictures of me when I was little pushing our cat in a doll baby buggy. I don’t really remember doing this, so I must have been pretty young. Mom said the cat would just lay there and then run off when it got tired of being pushed around in the buggy. The cat must have been tolerant-or aware it could take off whenever it wanted to.

That’s hilarious! You’ve given me hope that I will indeed be able to push a kitty around in pram. 😀

Jenny and I used to dress the cats up in baby clothes!

I think many cats still think of themselves as overlords today! I had a cat once and loved here. She lived for 16 years, but she died, my daughter (who was only a year old) suddenly started breathing better. We next got a dog (who just died this past November at 17 1/2 years of age). Without Trisket, the house was too quiet and now I have the most expensive rescue on the planet (as she is currently crate confined after surgery on her back knee… But Mia is one loving pup!

I’ve seen your post about your rescue puppy! She’s cute, and I love that you’re taking care of her. 🙂

Bwahaha, I love the Chinese story!
One of my archaeology professors did research on cats and dogs in folklore, vs how they were treated in history. Turns out dogs get worse proverbs and beliefs, but cats have been tortured more. Go figure.
I’m happy you are joining the challenge again this year! 🙂

The Chinese myth is great. 😀 And, yeah, the cat torture was kind of ridiculous. Poor kitties…

I’m actually not doing the challenge this year. This is my own little series/challenge (based on the A to Z) that I’m doing to try and keep myself blogging. Otherwise I’ll fall into my hidey-hole. 😛