You might not know this about me, but I have a slight food obsession—particularly in fantasy literature. I don’t know what it is, but descriptions of food in made-up worlds are particularly engaging to me. I think it’s because they help bring that world to life in a way that simple descriptions can’t. We all need to eat, and it can be telling what kinds food a person or a society eats. Also, I’m just fond of domestic life in general. When in a museum, it’s the paintings of kitchens and women doing laundry that capture my attention more than portraits of kings or Madonnas ever could.

Now with Christmas approaching, and me thinking about food a little bit more than normal, I thought it would be fun to do a post about some food and cooking history. This is the kind of information that I find quite interesting, and that may or may not find its way into a story at some point in the future.

The first cookbooks arose with the arrival of the printing press. The first one that became popular was Platina’s De honesta voluptate (“On correct pleasure and good health”), first printed in Rome in 1470. This book (and others like it during the Renaissance) was a treatise that explored both how to eat healthily as well as for pleasure. Interestingly, Platina’s book was largely based (i.e. copied) on a cookbook called Libro de arte coquinara (Book of the Art of Cooking) by Maestro Martino of Como. What made Platina’s book stand out was the medical and moral commentary he added derived from ancient sources like Pliny and Apicius (and Galen, see the next paragraph), which appealed to the humanists of the time.

The health claims in these books were based upon Galenic physiology, which was largely based on the idea of four humors within the human body: blood, phlegm, black bile, and yellow bile. Food was believed to share the same humors, and eating certain foods could affect one’s humors in different ways. This is an area I would love to do more research on, and find/make up a menu based on these criteria. Fun!

Forks apparently date back to the 14th century (in Italy, anyway), but it wasn’t until the 16th and 17th centuries that they became widely used among the nobility and elite. 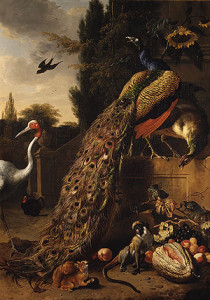 Peacocks and swans were feast birds of choice during the Renaissance. They were later replaced by turkeys as more foods were imported and assimilated from the New World. In his cookbook, Martino had a recipe called “how to dress a peacock with all its feathers, so that when cooked, it appears to be alive and spews fire from its beak.” (Food, p. 207) That sounds both impressive and terrifying.

Similarly, dessert (as a sweet, separate dish after the savory courses) didn’t exist in Europe until the 17th century, prompted by the influx of sugar from slave-driven plantations in colonized lands. Prior to that, sugar had been used as a seasoning, much like salt or any other spice, and was used in pretty much every dish. Access to more sugar resulted in dishes that were distinctly sweet, and led to a separation between sweet and savory in food that previously hadn’t existed.

The above little facts come from a book called, Food: The History of Taste. I haven’t read as much of it as I would like, but what I have read of it is really interesting. I have another book that I bought fairly recently. I love the title of it, so I just need to share it here in all its glory:

The Art of Cookery, Made Plain and Easy: Which far exceeds any Thing of the Kind yet published… To which are added, By Way of Appendix, One hundred and fifty New and Useful Receipts, And a Copious Index. By a Lady. The Seventh Edition.

I love the “by a lady” attribution. I’m not sure why that was pointed out, but apparently the lady of note is Hannah Glasse. Of course, I am skeptical that they are “new” recipes and not plagiarized from a different source, because that really did seem to be standard practice back in the day.

This book was first published in 1760. The book I have is a copy of the original, made from digital scans and then reprinted. It’s awesome just for that reason, because you have the original typesetting, printing blemishes, and weird typography (“s” for example, looks almost exactly like “f”). It’s also hard to read for those same reasons. But reading through this book is like a taking step back in time. You can get a feel for how things were done so much better than just a description in an encyclopedia. I have yet to read it all, but here a couple short recipes, in the spirit of Christmas.

To keep green gooseberries till Christmas.

Pick your large green gooseberries on a dry day, have ready your bottles clean and dry, fill the bottles and cork them, set them in a kettle of water up to the neck, let the water boil very softly till you find the gooseberries are coddled, take them out, and put in the rest of the bottles till all are done, then have ready some rosin melted in a pipkin, dip the necks of the bottles in a cool dry place where no damp is, and they will bake as red as a cherry. You may keep them without scalding, but then the skins will not be so tender, nor bake so fine.

There were no peacock recipes in this book, unfortunately, so I settled for a turkey one.

To roast a turky the genteel way

First cut it down the back, and with a sharp penknife bone it, then make your force-meat thus   take a large fowl, or a pound of veal, as much grated bread, half a pound of sewet cut and beat very fine, a little beaten mace, two cloves, half a nutmeg grated, about a large tea-spoonful of lemon-peel, and the yolks of two eggs, mix all together, with a little pepper and salt, fill up the places where the bones came out, and fill the body that it may look just as it did before, sew up the back, and roast it. You may have oyster sauce, sellery sauce, or just as you please, but good gravy in the dish, and garnish with lemon, is as good as any thing. Be sure to leave the pinions on.

Surprisingly similar to the present day with the stuffing of a turkey, though different enough to be interesting (and mildly gross). Also, I simply like the language, but maybe that’s just me. I should leave it at that, but then I found this next one, and I’m not really sure what to make of it. So I’m including it for sheer oddness-factor. If you have any ideas, please share.

Mostly I’m just wondering what’s wrong with real asses milk? And why does this have snails in it? And what, exactly, is hartshorn shavings? Or do I not want to know? It is some kind of curative, though, as it’s found in Chapter 10: Directions for the Sick. The next chapter is, “For Captains of Ships” which has lots of preserve-type recipes, which I love.

What’s that you say? You wish you had a recipe for catchup that lasts for twenty years? Well, all right then. Since you need it, here’s one more.

Take a gallon of strong stale beer, one pound of anchovies washed from the pickle, a pound of shalots peeled, half an ounce of mace, half an ounce of cloves, a quarter of an ounce of whole pepper, three or four large races of ginger, two quarts of the large mushroom-flaps rubbed to pieces. Cover all this close, and let it simmer till it is half wasted, then strain it thro’ a flannel-bag, let it stand till it is quite cold, then bottle it. You may carry it to the Indies. A spoonful of this to a pound of fresh butter melted, makes a fine fish-sauce. Or in the room of gravy-sauce. The stronger and staler the beer is, the better the catchup will be.

It sounds quite potent, given you’re supposed to add a spoonful to a pound of butter. I wonder if they ever dared each other to chug a bottle of it…

Hi Sara – what a fun post … I must re-read. The Romans were great cooks … so you could go further back a few centuries … but concentrating on the Renaissance to the 18th C brings in lots of new ideas and new products (vegetables, meats, herbs, spices, etc) from around the world. Feast meats were often many birds stuffed inside each other … incredible what they were able to do back before electricity, health and safety etc …

Catchup is still a favourite .. and now Turkey … cheers Hilary

Thanks, Hilary! Yeah, I would love to go back and study ancient Roman cooking. The Renaissance was all about bringing back customs from antiquity, so it would be interesting to find out what the fuss was all about. 😉 18th century is really interesting because of the importing of goods from other parts of the world. It’s around this time that food habits seem to become similar to what they are now. But it’s also interesting to learn about food habits from before then, before we had access to everything on the planet. There’s so much to learn, I could easily spend days researching just this, but I’d better not. 😉

I thought the catchup recipe was fun. Different from how we know it today (and spelled differently too. That seems to be a word that’s gone through a few iterations: catchup, catsup, ketchup, etc.)

Interesting post. I like learning about how people lived in the 1700s and 1800s too. It must have been a challenge for them to cook without the modern conveniences we have now. Using stale beer to make catsup is a unique idea. LOL.

Nothing ever went to waste back then, so maybe that’s why the recipe uses stale beer. 😉

I love this, Sara! I’m fascinated by food descriptions in books too – I’m glad to hear I’m not the only one.

Those old cookbooks sound amazing. Have you ever seen The Little House on the Prairie cookbook? It’s not old, but a woman spent tons of time recreating the recipes mentioned in the Laura Ingalls Wilder books. Haven’t made anything yet, but it’s really interesting!

I haven’t heard of that cookbook. It sounds fascinating. I’ll have to check it out. Thanks for the tip!

Did a little research, and hartshorn is the shaved antler of a male deer (specifically, a red deer). Baking soda will do the trick nicely. As for the snails, I found this bit on the supposedly curative powers handed down since – who else? – Pliny! To give it added credibility, the link is from the National Institutes of Health: http://www.ncbi.nlm.nih.gov/pmc/articles/PMC1062150/

Ooh, good finds! Thank you! That report looks interesting. Just glancing at it, it looks like snails are used for all kinds of ailments, even today. I guess Pliny knew his stuff. 😉 Quite fascinating, really.