I’ve been working like crazy on the final edits of my book. The good news is I’m almost done. The bad news is I’m nearing burnout. I’ve read through the manuscript countless times, tweaking this, rewriting that. It’s the grisly part of writing where toeing the line between love and hate is a regularity. But I can see the light at the end of the tunnel, and I’m clinging to it for dear life.

I have also, as I write this, just approved the final version of the cover design. It’s nice to have that detail taken care of, which brings us one step closer towards publication. There are still a number of other items that need to be done – the back blurb, acknowledgements, and I really have no idea what to use for “about the author.” But I suppose I’ll cross that bridge when I get there.

It’s been a lot of hard work getting this far, and it hasn’t always been fun. One part that has been a lot of fun was creating our own company to publish the book. In creating that company, we needed to come up with a name. That task was left to me.

You’d think something as simple as coming up with a name would be easy, but for some reason it really eluded me. I drew a blank for about three months until, in an epiphanic moment while scrubbing out the shower, it finally came to me: Tree and Tower Publishing. It was perfect. It had ties to my book and just sounded cool.

So Anders submitted the name to the proper authorities and it was summarily denied. The reason was that it was too close in name to another publishing company in France (which it really wasn’t, but whatever). Anders came home and told me I’d need to come up with a new name by noon the next day.

I was flustered. I mean, it took me months to come up with that name, and now I needed to come up with a new one in a matter of hours. Feeling frustrated and defeated, I looked over at one of our cats as he sat perched upon a box, as he is wont to do.

“How about Double Beast Publishing,” I said in a “that’ll learn ‘em” tone of voice.

Anders was quiet a moment and then said, “I like it.”

I actually kind of liked it too, which then caused me to get all excited and start over-thinking it, as per usual. “Oooh,” I said. “We can call it January Beast Publishing, because, you know, Janus has two faces and…”

Once the name was approved we had an emblem made up by our trusty go-to artist Ferdinand Ladera, and Double Beast Publishing was born. So keep an eye out for the mirrored beasts on a copy of The Thirteenth Tower, which, Janus willing, will be out next month.

Until then, here are the beasts of inspiration: 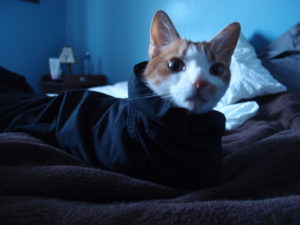 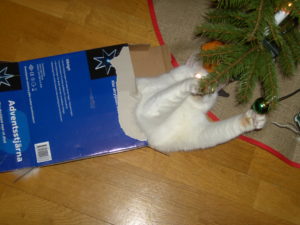 Sally’s attack on the Christmas tree via assault vehicle.

I’m still toying with a name for my imprint as well. I’ve already started an LLC for it, but I want to try and change it.

At any rate, I’m SO excited for you, and I can’t wait to read your story! It’s going to be awesome.

Thanks, Katie! I’m both excited and really nervous about the book coming out.

Good luck with finding a name for your company and getting all the kinks sorted. 🙂

I love that your cats inspired your imprint! I have four cats; maybe they can inspire me to do more than just feed and play with them ;). I also appreciate your effort in editing. I know that’s one reason why I keep putting it off … Right now there’s no light at the end of my tunnel.

Thanks, Marie. Editing can definitely be taxing, though it is rewarding to see the book improve. Keep on down that tunnel, and you’ll get there. 🙂

Congratulations on the final tweaks! I feel your pain with the fine line between love and hate thing :-S

And names – urgh! I even hate titles. Except for the occasional times when the perfect one comes to me – normally around the same time as the inspiration for the story – I am rubbish with titles. If it were up to me, I’d call them all ‘Claire’s Story 1’, ‘Claire’s Story 2’, and so on… !

Haha! Yeah, I know what you mean. Names/titles definitely aren’t my strong point either. 🙂

I just found your blog, but I’ve seen you on google+. Anyways, your blog is beautiful (and I’m jealous). This weekend, I’ll be sitting in front of my novel doing serious line editing, so I feel your pain. good luck. You’re so close! It’ll be amazing when you’re finished.

Thanks, Constance! It’s great to have you stop by. 🙂 Good luck with the editing!

“Double Beast” is such a perfect name. The love/hate relationship of doing something that challenges us is a double beast that we can all relate to. You’ll find this duality in pretty much every aspect of life, so it will undoubtedly work its way into all of you stories. Congrats on sticking with this; I can’t wait to read your book!

That’s a good point. I never thought of it that way. Thanks, Lori. I’m really excited for you all to read it! 😀

ARC Review: “Hazel and Holly” by Sara Snider | Books for the Beach - a couple of years ago

[…] and Holly! As a side note, I learned recently that Double Beast is actually Sara Snider’s own publishing house that she created after writing this book. I thought that was super cool! As a reviewer, it makes […]