It’s summer time. The weather here in Sweden has turned hot and muggy and, now that we’re on vacation, my laziness has kicked up a notch.  My natural inclination is to say, “So long, world!” ignore the Internet and basically go dark for the next few weeks. But because I don’t want to completely ignore my blog, instead I’ll write a so-called “lazy post,” which is basically me just rambling about whatever with no real point to any of it. You’ve been warned.

So now that I’ve got some free time on my hands, I find myself planning for all the little projects I want to get done. Like wax the furniture and oil the kitchen counters (we have lots of wooden stuff). Or, on the fun scale, catch up on some reading. Then I rediscovered my crochet bag, sitting out in plain sight all this time, yet having been dismissed by me as part of the décor. 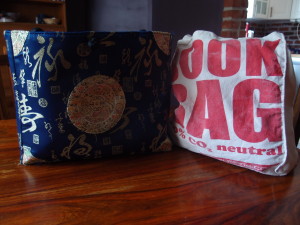 I like to crochet, but it’s not something I do all the time. But every now and then I get the bug, and I’ll crochet for a few weeks/months until I get tired of it and basically abandon whatever project I’m working on for the foreseeable future.

Right now, that project is an afghan of granny squares. I’ve never really been a fan of granny-square blankets, mainly because they always seemed to have freaky color combinations of brown and blue and orange. But then one day I saw a lovely afghan that basically redeemed the granny square for me. Plus, it seemed like a good project I could just chip away at. Crochet some squares every now and then, and eventually I’ll have enough for a blanket. I think I started this particular project around three or four years ago. I still don’t have enough for a blanket, but I’m considering sewing together what squares I have, just to see how far I have to go and which colors I need to be focusing more on. 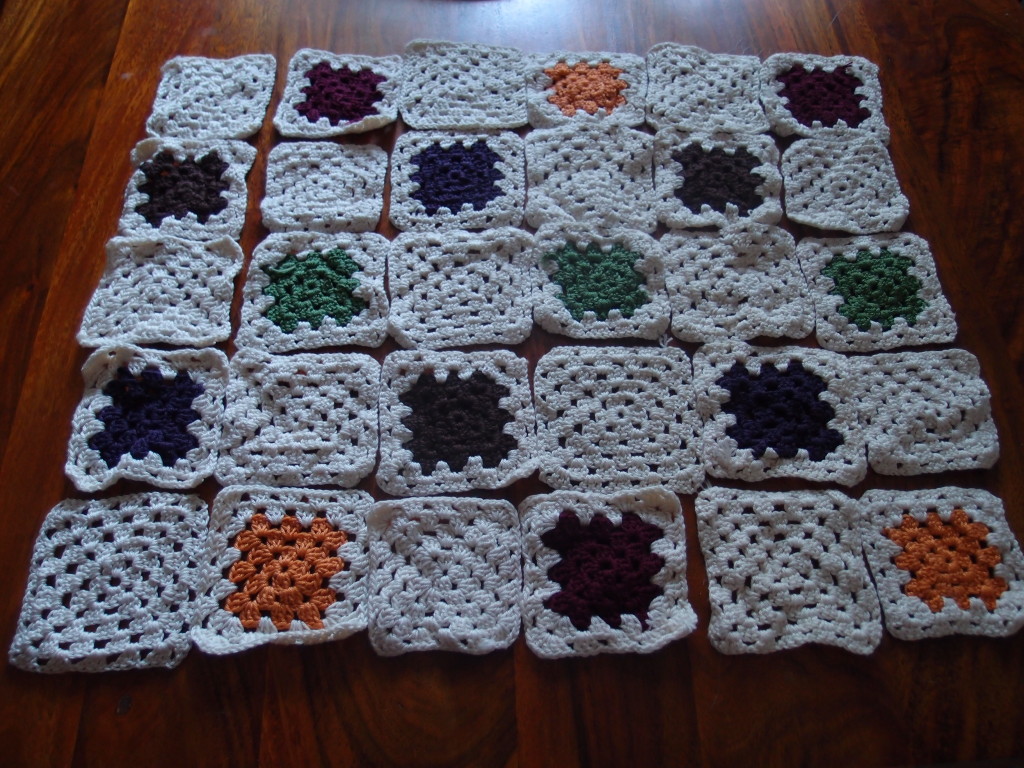 An idea of what the finished blanket will look like.

So, on Sunday, I started up on it again. Crocheted some squares, mostly to reassure myself that I still knew how. While I was sitting there, though, I kept thinking of the other things I want to be doing this summer. Namely, reading. To say I am behind in my reading list is a glorious understatement. But I was having fun crocheting again and didn’t want to give that up, either. Then it occurred to me: audiobooks.

Now, I’m not an audiobook fan. I have always been a visual person–I understand information better when I see it rather than hear it. So audiobooks are something I’ve never tried before. But the idea of knocking out two birds with one stone, so to speak, was quite alluring. So I began poking around for freebie audiobooks to wet my ears.

One thing I’ve learned from all of this is that LibriVox  is awesome. LibriVox is a non-profit organization that records books in the public domain and puts them out for free. So, in other words, they do classics. I love classics. There are tons of them that I’ve been meaning to read, but just haven’t gotten around to yet.

So, I decided I’d check out Jane Austen’s Pride and Prejudice. It’s a book I’ve been meaning to read for a long time, and Leanne Ross has made me see the error of my ways in having not yet read it. Since I didn’t want to have to have my laptop out, I decided to look for an app that would let me listen to audiobooks on my iPod. There are lots of different audiobook apps out there, both for free books as well as paid.  OverDrive has a nice app that lets you connect to your local library to read and listen to books. Unfortunately, it looks like Swedish libraries have yet to hop on that particular bandwagon, so I continued the search.

I tried a number of free apps that give access to free audiobooks (all of which seem to be provided by LibriVox). Ultimately, I found the Audio.books app to be my favorite. It has a decent interface and a nice selection of recordings. My favorite feature is that I can “rewind” in 15 second increments. I’m prone to block out noise/voices and just fall into my own little world, so that’s really quite handy for me.

(Alternatively, there’s a nice LibriVox app  on Google Play if you have an Android device rather than Apple.)

I haven’t listened very far into the book, so I can’t say if this little venture into the world of audiobooks will be successful. But I think it’ll be fun giving it a shot. 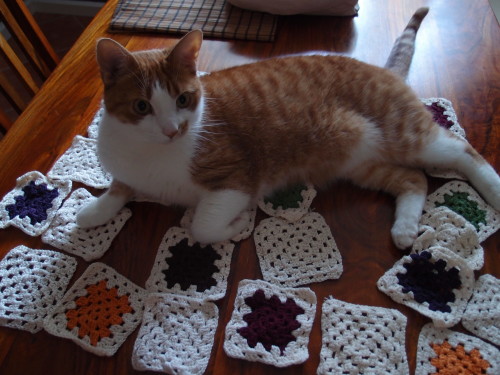 Jasper isn’t as helpful as he thinks he is.

Do you have any projects you want to get done this summer? Are you like me and find it more difficult to listen than to read? Do you have any cats that perpetually place themselves on whatever it is you’re working on?

I’m like you with crochet, I pick it up every so often, crochet like mad and then forget about it for months on end – so much so, I usually have to remind myself of the stitches each time (and remember which way round the US and UK instructions go, whether it’s sc or dc for UK and stuff like that). The granny squares is a really good idea for the dipping in and out technique.

I’ve only ever listened to one audio book. that was an Inspector Morse when I was driving for four hours, and it was the perfect length. I’m interested in audio books from the production as well as the listening perspective, though, since I was thinking of converting one of my shorter novels into one. We shall see how successful I am though when I attempt the recording ;P

Yeah, I stick with the double crochet stitch for just about everything, it makes it easier that way. I’m impressed that you’ve ventured into US and UK instructions. I learned to crochet using US terms, so even now I look up US instructions. I should venture into the world of Swedish instructions, but I don’t know if I’m dedicated enough for that. 😛

Good luck with recording your book! If you do end up doing it, I hope you’ll blog about it and tell us how it went. 🙂

I love audiobooks! They make me feel so productive. I also like to crochet, and I love that blanket. I don’t love the feel of yarn, though, so I never really use them as blankets. I’d have to find just the right texture. But those granny squares are so cute that I really want to try now!

Yeah, I know what you mean about feeling productive. I’m plugging along through the book. I’m a slow reader partly because I try to imagine everything so clearly. That’s hard to do when listening, and so I’m learning to let that desire go and just listen. I’m getting the hang of it, I think.

Yay for crocheting! Maybe you could find a really soft yarn normally used for baby blankets. Or, you could do what my sister does and just give whatever you crochet away to friends/family. 🙂

I’m a bit of a granny square nut myself – they’re like the fruit flies of the fiber world, and perfect for those with short attention spans such as myself. Hexagons (granny hexes?) are fun too. Since I learned to crochet three years ago, I’ve made five blankets.

I’ve never been much of audiobook person myself (for the same reason as you, I’m a visual type) but maybe now I’ll turn a few up and dig out my crochet hooks.

(And your cat is adorable!)