I connected with Tanya a couple of years ago when I hosted my first Halloween Blog Hop. It was my first year blogging, and I really didn’t know how much interest there would be. So you might imagine my delight when people actually signed up for it, and one of those people was Tanya. She wrote several stories that year, and while I didn’t read all of them at the time, the one I did read has stuck with me as it was one of my favorites.

Now she’s got a new fantasy book coming out, The Box of Souls, and so to celebrate, here’s one of the stories she wrote for that blog hop almost two years ago. Tanya says it’s based on an Ecuadorian urban myth her mother used to believe in when she was a child. I love a good urban myth, and this one’s properly creepy.

The yellow police tape along the border of the mausoleum entrance flaps against the smooth evening breeze. I pull up to the officer directing traffic.

“Excuse me Officer. What happened?”

The officer glances at the line of cars behind me and swings his arm at his elbow in a circular motion. “Crime scene, keep moving.”

I close my window and inch my way around the zigzag parking of six police cars and a black truck with the word Coroner painted on the back wall.

Katelyn is standing at the corner talking to a young officer with a day old beard and deep set eyes.

The voice hisses in  my ear, Find out what the officer is telling her.

I park my black Explorer a block away and walk to the same corner.  I stand close behind them but keep my distance.

“No. Looks like he’s been dead for a few days. His fingernails were peeled backwards.  The poor guy was trying to dig his way out of the slot. It’s one of the scariest things I’ve ever seen.”

The officer leans into Katelyn and nudges her elbow. “I have to go. Be careful going home. If you see anything suspicious, don’t hesitate to call. Say hello to your mom for me, will you?”

“I will. Take care,” she says as he gets into his cop car.

Katelyn jumps when I approach. “Jesus Zoey, you scared me.”  She chuckles nervously and wipes a tear from her right eye.

“Sorry.” I look around to make sure no one can hear us. “So did that officer tell you what’s happened?”

“Yeah. Apparently a man was sealed inside a mausoleum slot while he was still alive.”

Katelyn’s eyes widen. “I know! And they think the perp is a man measuring at least six feet tall, between the ages of 25 and 40, and weighs between 160 and 210 pounds.”

Good. That can be anyone, the voice says.

“That can be just about anyone in this crowd,” I say to Katelyn. “Maybe they should–”

“Oh!” Katelyn grabs my arm suddenly. “Someone gave them an anonymous tip, telling them the exact slot. Can you believe that? Talk about crazy.”

My heart beats faster with every word that comes out of Katelyn’s mouth.

“It was a hand-written letter, with several different cursive styles and lots of scratching off, as if the writer was confused or angry. They believe it’s a schizo. Oh, and the ink he used is a special ink. He called it…savi…suti…I can’t remember the exact name. It sounded Asian, like sushi or saki.”

“Sumi ink?” I whisper softly, hoping He didn’t hear me, wishing Katelyn would take the hints and help me put an end to this.

“That’s it! Sumi ink! The letter was written with Sumi ink. How did you know that? Oh…that’s right. You’re an artist. You know this kind of stuff.”

“So, now they are looking at art supply stores and art schools, finding local artists with criminal backgrounds and stuff like that. Maybe you could help the police, since you’re in those circles.”

Zoey, continue this conversation and I will make sure Katelyn wakes up in a sealed crypt with no one to hear her screams, with no hope for salvation, with nothing but a few hours’ worth of dusty air to burn her lungs. You are killing her.

A thick ball forms in my throat. It’s hard to swallow. “Well,” I say after coughing out the tightness, “I used to be an artist. I don’t have time for that anymore.”

“Yeah. Overnight shifts. You know how it is.”

“This is really creeping me out. I’ll see you later.” I start backing away and head to my car.

“Well if you see or hear anything, call me and I’ll let Jim know,” she yells down the block after me.

My barrier begins to fall. I wrinkle my face to keep from crying, from screaming for help. A tear streams down my left cheek and I wipe it with my sleeve. “Okay, I will.” I shout back over my shoulder and climb into the driver seat.

[author] [author_image timthumb=’off’]https://saracsnider.com/wp-content/uploads/2014/06/profile_pic_beach.jpg[/author_image] [author_info]Tanya writes fantasy, sci-fi and a little romance. She loves Jane Austin, running 5Ks though Braddock Park in North Bergen, and playing softball and soccer with her kids. If you give her some Godiva, she’ll be your best friend. Connect with Tanya on her blog, Facebook, Google+, Twitter, Goodreads, Pinterest, and Instagram.[/author_info] [/author]

Even the darkest magic can’t break the bonds of family. 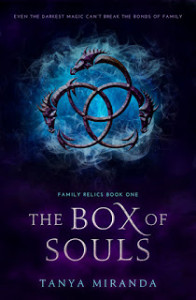 18-year-old Jasmyn secretly resents her family’s preference for her 8-year-old sister Katarina. Her jealousy grows when her grandmother, a dying witch, overlooks Jasmyn and chooses Katarina to inherit her magic powers. Although being second-place to her sister is something Jasmyn has grown accustomed to, this rejection wounds her like no other.

When sinister dragons appear along the California coastline, Katarina tries to stop them, but her spells fail. Her family discovers it is because she didn’t inherit all of their grandmother’s magic and that her grandmother split her magic between the two sisters.

Now, Jasmyn and Katarina must work through their sibling rivalry to stop the menace. Can Jasmyn put her pain and resentment aside to wield her grandmother’s magic? The bond of sisterhood is strong, but so are powers of darkness.

Failing That… by Damon L. Wakes

Thanks for sharing the story. The urban myth adds an extra layer of shivers…

My pleasure! And I agree about the myth making it more creepy. 😀

Ooh that’s a great story, properly creepy. It almost feels like the start of something longer – I want to know more about Zoey! Congrats on the release Tanya!

Thanks, Celine! Perhaps prod Tanya a bit so she’ll expand it? 😉

Thanks Celine! No plans to expand the story, but who knows what the future holds. 😀