This year has been pretty crazy, short though it’s been. A death in the family turned everything upside down, and then January flew by in muddled haze. I feel like a mole that’s ventured up from the ground, blinking at the bright blue sky.

To say I haven’t gotten much writing done lately is an understatement. And the blog itself has been relegated to the “pssht, yeah right” category. I don’t want to completely ignore it, though, and so I thought I’d take the time to share what I have done the previous year, and my plans for the year to come.

The Tree and Tower Series

I finally settled on a name for my series, of which the The Thirteenth Tower is the first book. I know, I probably should have come up with the name prior to the book being released… but yeah. I don’t always do things the right way. Keeps things exciting.

Also, last year is when The Thirteenth Tower was published. I’ve actually had to remind myself of that fact. It seems like so long ago. The only explanation is that publishing is, in fact, an alternate universe, within which time passes differently. That must be it.

Along the same lines, book two in the series is written and has gone through a beta reader. I haven’t settled on a title yet, though. I’ve also started book three (currently also title-less). Book two should be released next year, and I’m hoping the third will follow the year after that. This series will probably be a trilogy, but don’t quote me on that. I’ve always figured I’d keep writing in the series as long as I felt there was a story to be told. At the moment, I can’t see there being a fourth book, but you never know.

This is a dark fantasy novella I wrote and I’m really excited about it. It started out as a short story I had planned on submitting to an anthology. But then I realized it wasn’t complete, and so I turned it into a short-story trilogy. Then I decided the overall story is more enjoyable when read together rather than separately, so I bundled them up and called it a novella (hence the book only has three chapters).

I had a lot of fun writing it though, and I’m really looking forward to releasing it later this year. The manuscript is currently in the hands of an editor, and I’m working on a cover with Jenny over at Seedlings Design Studio (fist bump to Katie Cross for the tip). No solid release date for the novella yet, but probably sometime late spring/early summer. Stay tuned for future posts where I’ll share the final cover and the first chapter, too.

Seeing everything summed up like that, it looks kind of underwhelming. But I’m proud of it. It took me a year to write the first draft of The Thirteenth Tower. Now within the span of a year, I’ve written three drafts of the sequel, several drafts of an unrelated novella, and started a new project. (Oh yeah, and published the aforementioned book. But, you know, alternate universe weirdness and all that. Don’t make eye-contact.)

For this slow writer, it’s the most I’ve ever done, and that’s pretty cool. It’s exciting being able to look back and see improvement, which then bleeds into my excitement for the future, wondering where it will take me. Being a writer is hard–we need to take our victories wherever we can find them.

And now, here’s a picture of Jasper with a cat-toy on his head. 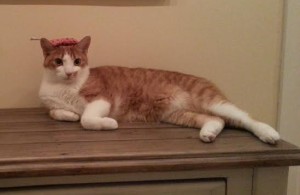 I hope you’ve had a terrific new year, and that the following months are filled with joy!

Finishing Up Hazel and Holly

Music to Fuel Creativity in Writing

Sounds like a very busy year, to me. I’m really looking forward to the novella, as well as book 2 of the series. Keep up the good work!

Woo hoo! You went with Jenny! She will do you right. I’ve shuttled many people to her, and I’ve seen the stuff she’s doing, and I’m still so in love it’s NOT EVEN FUNNY.

The blog is so hard to keep up with, seriously. Especially when life happens and you’re looking around thinking, “Wait, how do I write again?”

PS- super stoked about your novella. If anyone can pull of dark fantasy, it’s you, the woman who did that A-Z thing that blew.my.mind.

Aww, thanks Katie. And, yeah, “how do I write again” is pretty much exactly how I’ve been feeling. You always have the words. 🙂

A death can blow you off you track, no matter how focused you are. And not to mention keeping a blog rolling, and staying up to date with social media, industry news, indie publishing, hip hop, Miss Universe, P!nk, TBR lists, school closings, meteor showers, and what color will be the new black….

Where was I going? Oh yeah! Happy New Year and here’s to having a prosperous 2015!!

Thanks, Tanya! Yeah, I haven’t kept up with any of those things. Like, at all. I have NO idea what the new black is going to be! 😉