Searching for Sasquatch: A.K.A. “The Target Audience”

They say that if you want to sell books (or anything, for that matter) then you need to know your target audience. You need to go where your audience is, and let them know that you have something they want/need. It seems like pretty basic marketing stuff. You know, not rocket science.

And yet, for me, it is rocket science. It’s strap-me-to-a-dentist-chair-with-nails-on-a-chalkboard-while-shooting-me-off-into-space, rocket science. Part of it has to do with the fact that sales just isn’t my thing. If it were my job, a day at the office would look something like this:

Me: Could I interest you in this fantastic product?

And then this would be my boss.

Another part of it is that I just don’t have marketing knowledge. Given my aforementioned aversion to sales, it’s not something I’m eager to delve into. Every time I try researching the subject, my eyes glaze over and I start thinking about pancakes. But, since I have written a book and I’d actually like people to buy it so I can pursue this far-fetched dream of mine of actually be able to make a living as a writer, I need to start at the basics and find my target audience.

The Target Audience—Elusive as a Yeti in a Snowstorm

Part of my problem, I know, is that I wrote (and still continue to write) without a target audience in mind. They say (those chatterboxes) to always keep your audience in mind, and I haven’t done that. But, honestly, I wasn’t writing for them. I was writing for me. I write the stories that are in my heart and in my head, and, above all, the stories that I’d like to read.

And I don’t think I’m alone in this. I read an article by John Vorhaus, and really connected with the part where he wrote, “My books are for me – for people exactly like me!” It’s a sentiment that’s similar to what’s been floating around in my own head as I try to figure out my target audience.

Who is my target audience? They’re the folks who like the same things as I do, of course!

But who are those people? Is it an age and gender thing? “Females in their thirty-somethings” is a pretty broad spectrum, and many 30+ gals aren’t anything like me, so I’m not sure that’s a good fit.

Is it people who share the same likes and dislikes? Should I be looking for other awkward, middle-aged folks who’ve remained young at heart and have over-active imaginations? I have no idea where such people might be. Well, who aren’t fellow writers, at any rate.

Really, the only net I’ve been casting is the “fantasy” one, as I’ve just been unsure of where else to place it.

There is a point to this—hopefully not as elusive as the Yeti.

I’m willing to accept that finding my target audience will be more difficult since I have a tendency to write for myself, rather than a specific demographic. But I don’t want to accept that it’s impossible. I’ve never really thought my writing would appeal to wide audiences, so I’m not looking for miracles or anything, just a starting point.

Interestingly, I just found an article on “How to Find Your Ideal Reader.” Talk about timely. It’s like the Internet gods knew I wrote a post/rant about it, and sent the article to my inbox before I hit “publish.” The article is actually pretty helpful, and has given me something to think about in what to work towards beyond knowing the genre of one’s book. And while it does seem to provide a starting point, I still feel like I need to know more.

And that, I suppose, is the point of this post. It’s me wanting to start a conversation. It’s me looking for as much information and knowledge that maybe others have and would be willing to share. It’s me saying, “this is frustrating the bejeezus out of me,” and hoping I’m not the only one banging my head against this particular wall.

I really feel like there is no such thing as amassing too much information on this topic. I consider myself marketing impaired, so I welcome any and all insight on this matter. If you’re like me and are also struggling with finding your target audience, please chime in. We can commiserate together. I’ll send you virtual cookies.

If you’ve already gotten it all figured out, I’d love to hear about that too. Especially if you’re a “write first, ask questions later” type of writer, as I seem to be. I’ll also send you virtual cookies.

In fact, let’s just get the cookies out there. 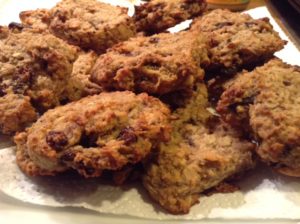 What say you? Do you also have problems finding your target audience, or is it just me?

Awesome post, just like your book. I think you are over complicating the issue. Most artists create from within, and do so because that’s the source from which it flows. How many times do you hear fans of a particular singer or writer whine because they feel said artist has deviated from their usual fare? How many times has Stephen King annoyed his fan base? I’m sure John Irving doesn’t give two figs about what I think of a couple of his books, and I still find his writing brilliant. I’m sure there is some analytical formula someone has put out there as “the right way to write”, and I’ll bet that person believes it because it worked for them. That doesn’t make it true for everyone. If you want more exposure for your writing, maybe try submitting some short stories and essays to magazines. Enter a couple of writing contests for different audiences. You will get both your name and your work in front of a variety of readers. Eventually a fan base will form, and then you’ll have your target audience.

Me? Over complicate things? That never happens. 😉

The short story idea is an excellent one, and it’s something I’ve been keeping in mind and wanting to do for a while now. But it’s actually really hard (for me, anyway) writing short stories. It’s like it uses completely different muscles. My last attempt ended up as a novella that I’ll be releasing soon. I’ll try to keep at it, though. Thanks, Lori!

First of all, I write for me, and I try and make some elements of it fit a YA audience. That’s pretty much where it goes in my world. I think the best writers write for themselves, or maybe one other person that they really love (like Stephen King) so I don’t think you’re alone in that.

As far as marketing and how it’s like death? Yeah, totally agree. I feel like I’m just beginning to figure the very tip of this very big iceberg out, and I’ve been doing it for a year. I’ve found that the more things I try, the more success I find in different ways. Some people don’t do half the marketing stuff I do and they still find success.

What is the point of this rambling comment? I’m not really sure. Commisseration, I think.

Death by cookies and pancakes sounds like a good way to go. Right up there with being suffocated by kittens (or pandas!).

Thanks for your input! It helps, really. Especially in helping me realize that we all seem to be trying to figure things out as we go. Right now, that feels more helpful than “this is how it’s done!” advice, which is kind of weird, but whatever. 😉

Excellent. You are 90% of the way there. Why? Because if you’re not enjoying what you’re doing, that feeling will come through in your writing. So what if you’re not writing the best selling or most commercial genre fiction? Tomorrow that could all change, and until then you’re only getting better with every word you write.

But eventually, alas, you are going to need to sell it!

Finding your audience is difficult. I haven’t found it, and I’ve been trying for a while. Submitting to magazines, as Lori says, is one strategy but I’m afraid that it’s just not that simple or easy: getting into a magazine is like finding a job in a recession, filling out a ten page application form, working your way through a four stage interview process and getting to within sight of an offer, only to be pipped to the post by someone ten years younger with a more up to date degree and who has just come from doing exactly that same job for another employer!

(I don’t sound bitter, do I? I only come on the Internet to work out my angst and feed my neuroses.)

Anyway, magazines are incredibly picky, the good ones amazingly so (the ones that pay professional rates, that is – because you do want to get paid and you want the kudos of citing a publication that pays its authors). They can afford to be. There are hundreds of thousands of wannabe authors out there. It’s a buyers market. And that makes submitting all the more stressful – hence my job-search-in-a-recession-simile. Also, magazines tend to want exclusive first world rights which may not seem like a problem at first, but if you’re submitting a story that you eventually want to put into an anthology, there are few publishers who’ll look at a book full of second-hand material. Having said that, most magazines only ask for exclusivity for a one year period, so after 12 months you can self-publish your story however you want.

Sometimes it’s not a case of knowing who your audience are, but simply marketing yourself effectively and thus allowing your audience the opportunity to find you. For effective self-publishing marketing strategies I can direct you to the website and books of Catherine Ryan Howard http://catherineryanhoward.com/
She’s got an updated book coming out. Should be worth a look. You will probably find that a lot of what she says you were already familiar with. I found this, but realised it’s always good to have confirmation of what you ‘thought’ you knew! And there’s always something you didn’t know.

Your epic comments are always a pleasure, Mike, and I thank you for taking the time to write it. I’ve not yet tried submitting any stories, but it doesn’t surprise me that it’s a challenge. Getting published in general has been equated with winning the lottery, or getting struck by lightning. So… yeah. Still, it could be a worthwhile endeavor to pursue while I continue to publish other works on my own. As for you, you keep at it! You’ll get there. 🙂

And thanks for the tip! I’ll check out Ms. Ryan Howard’s site. Can’t ever have too much advice–not on this, anyway.

Ha. This post sounds just like me, including the cookies and pancakes. (I love IHOP!) I write my stories for me. They’re what I want to read. I’m just now thinking about how to find others who might like them. If you discover how to find them, I’d love to know how you did it. I’m going to check out the “How to find your ideal reader” link now. Thanks!

Cookies and pancakes always help with dealing with the unsavory bits in life. 😉 If I ever figure out how to find my audience, I will definitely let you know. Good luck with your own efforts, and I hope that the article is useful!