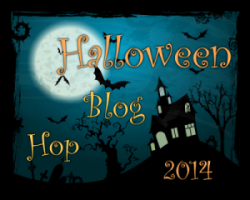 Halloween isn’t really a “thing” here in Sweden. It’s starting to be, mostly because the US does it so the Swedes are like, “Sure, why not?” Interestingly, Easter is when kids traditionally dress up as witches (not scary witches, but cute, ragamuffin witches) and go knocking on doors searching for candy. There’s no tricks though, and if you give them candy then you get a nice handmade card. It’s cute and fun, but that doesn’t mean I don’t miss Halloween.

So thank you for stopping by and reading, and thank you to everyone who’s participated in helping me celebrate the day.

As for my story, I hope you like whimsy.

Here’s the list of folks if you’re wondering where to go next:

Sever dug his shovel into the ground and hoisted up a heap of earth. He beat his wings against the air, flying up out of the hole he created and deposited the soil on the ground above.

Sever turned at Lir’s voice and found the snail creeping towards him.

“Nice day for digging up bodies, I guess,” Lir said.

Sever returned to his work. “What do you want, Lir?”

“Oh, nothing. I was just out wandering, you know, thinking about things. Pondering what’s the point of it all, stuff like that.”

“Yeah, no one seems to know.” Lir sighed. “It’s just, it seems so random. I mean, you have wings and… and bones. Why don’t I have bones? Why do I have this stupid shell and flabby body? I mean, what’s the point of that?”

Sever closed his eyes and shook his head. Having Lir around was always depressing–even for a faerie digging up bones.

“Who will bother digging me up when I’m dead?” Lir continued. “Without any bones, there’ll be nothing left of me. Just a slimy smear on the ground.”

“You have your shell. That’ll be left behind.”

“That’s true, I guess.” Lir paused. “But is my shell really me? Does it represent who I am, as a snail? I mean, what makes it unique from all the other shells out there? Will it show how I lived? How I died?” He paused again. “Do people even bury shells?”

Sever glanced at Lir. No one buried shells as far as he knew, but he was reluctant to mention that to his friend. “I’m sure some do.”

Lir seemed to relax. His gaze shifted to the hole in the ground. “So, who’re you digging up now?”

“Charlotte Moon. She was hanged for witchcraft and then buried here.”

Sever frowned. “I’m sure she didn’t think so.”

“Oh, but it is! No one would ever accuse me of witchcraft. Just because I don’t have bones or hands doesn’t mean I’m not capable of it. In fact, I think you’d be surprised by what I can do. But does anyone ever fear the cabalistic snail? Nooo. We’re reduced to nothing more than garden pests. It’s unfair, that’s what.”

Sever leaned on his shovel as he eyed Lir. “What, so you’re practicing witchcraft now?”

Lir’s eyestalks twitched. “Well, no, but that’s not the point. I could be practicing it, and I could be menacing, but no one would ever know. That’s the problem.”

“If no one knew, then you wouldn’t exactly be menacing, now would you?”

Sever shook his head. “Here, hold this,” he said and handed Lir the shovel.

Lir disappeared into his shell, letting the shovel fall to the ground next to him.

Lir poked his eyestalks out from under the shell, followed by the rest of his body. “You know I don’t have hands, Sever. How am I supposed to hold anything without any hands? You can be so cruel sometimes.”

Sever grinned as he hopped down into the hole. He brushed away some dirt, revealing a shard of bone. “I found her bones,” he called to Lir.

The silence lingered. Then, after a while, Lir’s eyestalks peeked over the edge of the hole. “Is she magnificent?”

Sever looked down at the bones in the dirt. “It’s just bones, Lir. I wouldn’t call them magnificent.”

“You’re always so insensitive. Thumbs are wasted on the vertebrates.”

“That makes no sense. You need a skeleton for thumbs. Otherwise you’d just have loose, flapping appendages.”

“Oh, yes, remind the snail how loose and flapping and disgusting his body is. I think I’ve had enough of your cruelty. I bid you good night.” Lir slunk away.

Sever closed his eyes and sighed. “She’s magnificent,” he murmured.

After a moment, Lir reappeared at the edge of the hole. “What did you say? I didn’t quite hear you.”

“I just knew it. How marvelous! I’m so happy for her.”

Sever shook his head and brushed away more dirt to expose the bones.

“So, what part are you going to take?” Lir asked. “Not the teeth again, I hope?”

“You always take teeth. Why not take something else? Like the skull, maybe. Or a femur. Wouldn’t you like a femur?”

“Femurs are bigger than I am. How am I supposed to fly hauling one of those around?”

Lir’s eyestalks drooped. “What does your master want with all these bones, anyway?”

“I don’t know. He says they’re for research, but I think he just likes collecting them.”

“Not any more creepy than you calling bones ‘magnificent.'”

“Uh huh.” Sever gripped one of the teeth and, putting his foot against the skull, pulled it out. He put it in a pocket.

“I don’t know. I guess I’ll stay here. Traveling is so slow, takes me forever to get anywhere. It seems pointless to try. But then, there doesn’t seem to be a point to anything, so I guess it’s fitting.”

“Do you always have to be so gloomy?”

“Easy for you to say. You have wings and a skeleton. You can do whatever you want. Me, I get to lurk in the grass. If I don’t get stepped on, that’s a good day.”

“All right, sorry I asked.”

Lir sighed. “See you around then, Sever.” He turned and left.

Sever put a hand over his eyes and said, “Wait.”

Lir peeked over the hole. “What?”

Sever pressed his lips together and grabbed the skull by the nose socket. He beat his wings against the air, pulling the skull up out of the dirt. He flew upwards, slow and wobbly, until he cleared the hole and dropped the skull on the grass next to Lir. Sever landed and rested against it as he caught his breath.

“So you are taking the skull,” Lir said.

Lir crawled in through an eye socket and settled inside the skull. “Thanks, Sever. You’re a good friend.”

“Yeah, whatever. See you around, Lir.”

With the tooth in his pocket, Sever then flew off into the night.

Failing That… by Damon L. Wakes

Poor Lir, he’s rather down about being an invertebrate isn’t he. Wonder what a snail will do with a skull … 🙂

Thanks for organising the hop.

I’m not sure I want to know what Lir will do with the skull. He seems to be a little too infatuated with bones. 😉

Thanks for joining in, Tasha!

So Lir now has a house within a house, skull and shell. That was sweet of Sever. Loved the mix of gruesome and kinda cute – I mean, who digs up bones and has an easy-going conversation while doing it – a faerie and a snail, that’s who 🙂

Thanks for organising the hop.

This whole scene made me think of Clerks set in whimsy fantasy land. 😉

Thanks for joining, Sophie!

I loved the whimsy! See what I mean about creating creatures? You know you’ve got that magic ball somewhere…

Hehe! My cat stashes it for me in his lair. 😉 Thanks, Tanya!

How fun that kids in Sweden dress up as witches on Easter! I love to learn about traditions in other countries.
And loved this story too. Your dialogue is awesome and the whimsy is fun. 🙂

I loved it. Twisted cuteness. My favorite.

Thanks for this sweet blog hop. I’m enjoying myself.

Thanks Djinnia. Glad you’re having fun. 🙂

I think kids walking around with handmade cards for easter instead of saying trick or treat for Halloween sounds way cuter!

I’m going to my inlaws this year, so I won’t be around to hand out candy at my house, which makes me kind of sad! But I’m sure I’ll see some there. I do enjoy Halloween, but I just didn’t have it in me this year to really celebrate it.

I feel like without kids or nieces and nephews that I don’t have a lot of motivation to celebrate most holidays. This comment went WAY off topic. *steers back to post*

It is really cute. I was going to say I’ll have to take a picture of them next time, but without any kids of my own, I realized that might be construed as creepy. 😉 So here’s some pictures on Wikipedia instead.

Have fun at your in-laws! And no worries, I like tangents. 🙂

Thanks for sharing about how they celebrate Easter in Sweden.

What a eerie new house Lir has. I look forward to stopping by the other blogs that participated in the hop. HAPPY HALLOWEEN!

Thanks, Susanne. Happy Halloween to you too! 😀

That was so cute, in a kooky kind of way. You had me at the opening with fairies digging up bones. Lir was adorable too. If it makes him feel better I know a few archaeologists who love finding snail shells.

Thanks, Debbie. Cool about the archaeologists! I think that would help Lir feel better. 😉

Oh my gosh, this was adorable! I absolutely love the interaction between Sever and Lir. They clearly have a broship going on that Sever is just trying so hard not to fall into. I can’t wait to see more! <3 Although, this is super cute on its own too.

Haha! They totally have a broship–Sever just needs to accept it. 😉 I’ll have to think about writing more about them. I don’t have anything else in mind at the moment, but they were so much fun to write that I’d love to continue it.

Thanks, Laura. Bummer you couldn’t write your story. I’ll look forward to it next year instead. 🙂

Very cute story! I’m really curious to know what Sever’s master is going to do with the bones and teeth. 🙂

Yeah, I’m not sure, actually. He should team up with Lir and do whatever it is they do with bones. 😉