The Mission, Music, Magic, and Writing

Netflix has become my new source of entertainment for when I fold laundry. Watching TV or DVDs has become so six-months-ago. Who wants to fiddle around with disks or bother muting commercials? Not me.

Having finished watching the latest season of Arrested Development, I needed something new for my escapades in textile organization, and that was how I stumbled upon The Mission. 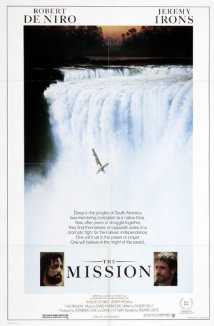 I first saw The Mission back in junior high where we watched it in one of my classes for educational purposes. Despite it being required watching, I loved it. It was beautiful and heartbreaking, made all the more sad for being based on truth. It’s one of those movies that I’ve revered as a favorite. Whenever I see a reference to it, I’ll sigh and think, “That was a good movie,” before moving onto whatever I was doing. I’ve felt this way about it ever since I first saw it, half a lifetime ago in those weird teenage years where you can’t really trust how you felt about anything back then.

Curious to see if I would still love it now as much as I did then, I watched it again.

I still love it.

I think, for me, one of the most powerful things in this movie is the music. When I saw this scene, my heart did weird things in my chest because I love it so.

It really resonated with me, partly because the music is beautiful, and partly because it brought to mind scenes from my own book. Even though music plays a small role in my story, and the scenes are different, the thematic elements are the same: music is universal. It can convey thought and emotion better than words. It can soothe wild hearts; it can save your life.

The scene is also an apt representation of my own relationship with music and how it’s evolved over the years. I’ve always enjoyed a rather broad spectrum of music, but the music I’ve come to listen to on a regular basis is much more narrow. I’ve found I increasingly prefer songs that calm my heart and mind; songs that take me places and inspire my imagination. I see myself in that scene in the movie, forgetting whatever turmoil I was carrying with me and just enjoying the melody.

Music for the Imagination

I’m still discovering the role music plays in my writing, but it’s certainly there. It keeps cropping up without any real intention on my part. I’m seeing it in the sequel to The Thirteenth Tower. It’s in The Forgotten Web—the series of short stories I’m currently working on. And while the role of music might be quite small in these stories, I still find it intriguing that it’s there at all.

So far, music in my writing seems to have a magical quality. It makes things happen in a way that magic often would in fantasy stories. I’m not sure why this is, other than I like to believe that music has power. It’s helped me past blocks in my writing. It recalls to mind memories and nostalgia—keeping certain moments in my life alive through the songs I listened to in those moments.

It often feels like I’m always looking for magic in this mundane world of ours. Maybe music is the closest thing we have to it. Or maybe it’s a bridge that takes us to magical places. Either way, it makes the world a little less dark. And that will always be a beautiful thing.

I haven’t actually seen ‘The Mission’, but I do have the CD of the music, and I love it. You’re right, it is really powerful and evocative.

Music can be inspirational, can’t it? I don’t always write to music, it sometimes gets in the way of my thought process, though an exception is fight scenes (comes from my Highlander fanfic days, I think, every sword fight always had a good rock number accompanying it ;P). But music does set my imagination going. Sometimes it can be like one of those 80’s story-based music videos in my head when a song gets me going :).

I agree, music is a bridge that can take us to magical places :D.

You’re like I was with “The Piano.” I bought the soundtrack before I ever saw the movie. I just knew I’d love it, and I did.

I very rarely write to music, because music usually takes me places, and that’ s distracting when I need to be at a particular part in a story. But I’ll often listen to music while walking, which is when I like to think things over and work out problems. Letting my mind wander at such times can be helpful.

Hehe–80’s story-based music videos. Now I’ve got Twisted Sister in my head. I’m pretty sure they had one of those. 😛

Both movies are haunting and beautiful, and you’re right – the music is the emotional driver in both of them. Another movie that captivates musically is “Immortal Beloved.” I’ve always had a fondness for Beethoven, and this movies just leaves me in a melted puddle every time.

Ooh, don’t forget about “The Deer Hunter” and “Gallipoli”! I’ve seen “Immortal Beloved” but I don’t really recall very much, other than I liked it. I think it was right after I got my wisdom teeth pulled where I was out of it from the Vicodin. Time to re-watch it, I think. 🙂

I’ve been watching Arrested Development too! Also while folding laundry, for the past two months. Is that crazy or what!?!? I can’t keep track of television schedules. Don’t need to when you have on-demand or Amazon Prime. Definitely going to check out The Mission.

I’m a huge fan of orchestra movie soundtracks, like The Gladiator and Pride and Prejudice (the one with Keira Knightly). I cannot count the number of times I’ve played them in the car, at home, on a run. My mind wanders into other worlds, into other characters, into another time and place. With those amazing scores there are no limits to what your mind can create.

Check out these pieces from each album.

Another I great movie soundtrack I recommend, that’s more of a rock ensemble, is the soundtrack to Great Expectations with Ethan Hawk and Gweneth Paltrow (1998) . Pulp Fiction, Kill Bill, 50 First Dates, French Kiss….my list is long!

Those are great! Especially the Pride and Prejudice music–I have a soft spot for piano. What I especially like about The Gladiator soundtrack is that it has Lisa Gerrard. I’ve been a big fan of hers for a long time.
https://www.youtube.com/watch?v=1p2g2WuGXwE

I also really like soundtracks! I’ve been listening to a lot of Clint Mansell. He did the soundtracks for “The Fountain” and “Moon”. I also like Audiomachine–their music is very soundtrack-ish (they do movie and video game trailers, I think). It’s great music to run to, and for just feeling awesome in general.
https://www.youtube.com/watch?v=1p2g2WuGXwE

I’ll have to check out your suggestions, though I know the Pulp Fiction one is awesome. 🙂

If there’s one limitation in a book that even great literary skill cannot overcome, it’s the lack of a soundtrack (although, in the digital, multi-media age, I suspect that limitation will soon be overcome as the lines between media become blurred).

One can suggest a certain rhythm and cadence through the use of assonance, for example, and I’ve tried this in my fantasy as it seemed quite appropriate to that genre: it leant the dialogue an otherworldly, and ancient, flair. But words can really only describe the effect of the experience on the characters. We still rely on the reader to fill in the sounds from their own experience, and can only try to prompt them to recall the right sort of sounds.

Speaking of the right sort of sounds, Michael Nyman is probably the most skillful piano composer of our age. Ludovico Einaudi strikes many emotional chords, but his sound is a little more populist. Gallipoli is a movie I will always remember as it introduced me to the work of Samuel Barber. And speaking of movies, I think Hans Zimmer overtook John Williams as the premier movie music composer of our time with the Lord of the Rings movies, and his work has only got better since. However, as a musician, John Williams’s rendition of Rodrigo’s Concierto de Aranjuez is one of the finest performances I’ve ever heard and would happily take it to my grave. (Williams limits himself to only one or two performances of this piece a year in order, as he says, to keep it fresh. It would seem to work!)

And, of course, as a writer, one simply has to appreciate Sting. The only pop music composer who uses literary references! And one of the few currently working who bothers to construct viable narratives with his songs, rather than simply striking easily reached emotional beats.

I sense a lengthy discourse coming on… so I’ll stop here. It’s terribly bad form to write essays on someone else’s blog! 😉

Words certainly have rhythm, and not just with assonance. Just syllables and the way words fit together. Not quite like music, but it gives a certain flow to the text which can be pleasing. I’d be interested in reading your writing, though, where you tried the assonance tactic. Sounds interesting.

Have you seen “No Country for Old Men”? That was a movie with almost no music in it. I didn’t notice it until afterwards, but I think it made the movie all the more stark and disturbing.

I am fond of Michael Nyman. I’m not familiar with Ludovico Einaudi, but from what I’ve heard while briefly checking him out, it sounds like he’s got some good stuff. I will always remember “Gallipoli” for introducing me to Albinoni’s “Adagio in G Minor” which remains one of my favorite classical pieces to this day. “Concierto de Aranjuez” is a beautiful song. I’m particularly fond of Sarah Brightman’s rendition of it: https://www.youtube.com/watch?v=TZzG8EKgO04

I had no idea Sting uses literary references. I’ll admit I’m fond of emotional beats. I’ve always been one to tune out lyrics and just listen to the music. It’s one of the reasons why I love Lisa Gerrard so much–she just sings using a made-up language. Awesome stuff. Though, in saying that, the song “Roses” by The Indelicates is one of my favorites because of the lyrics. The words in the song have a rhythm all their own, which is awesome. https://www.youtube.com/watch?v=VOTRrc1WAyM

A long comment warrants a long reply. 😉 I read somewhere that if you find yourself writing a long comment on a blog, that you should take it as inspiration for a blog post. Could be good advice. I’d like to read more on what you’ve got to say on the topic.

Oh, and I just found out that there is an AI that composes music. Talk about lines being blurred.
http://artsites.ucsc.edu/faculty/cope/Emily-howell.htm