Verdandi is a norn that is said to determine the fates of men. She is one of the three most important norns in Norse mythology: Weird (“happened”), Verdandi (“happening”), and Skuld (“future” or “debt”). What is interesting about norns is that they are said to be women from different origins, i.e. humans as well as elves and dwarves. Good norns of noble parentage will shape prosperous lives for men. Evil norns of lesser birth shape only misfortunate lives. 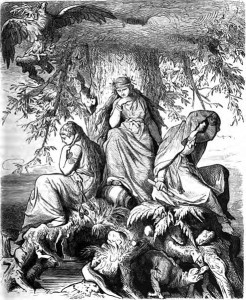 Unfortunately, there seems to be a lack of information regarding Verdandi. Skuld gets to ride into battle to determine who will be slain and to govern the killings. Weird seems to get stuck at home, tending her well under the branches of Yggdrasil. Verdandi is named only once in the Edda, and that’s just to drop her name. Is she like a red-headed step-norn? Someone the other norns don’t like to talk about? Who knows.

It is, however, kind of interesting if you think about it. Verdandi is the norn who determines the present. Her absence in the pages of the Edda makes me wonder if this is a reflection of man’s tendency to focus more on the past and future than on the present moment. I think we all do this at times–wonder about “what could have been”; worry about the future and what is to come. It’s sometimes harder to focus on the present, which is, perhaps, less interesting. Now often is a calm moment, lacking the bells and whistles of past problems and future worries.

Because of this, I will imagine Verdandi as the quiet girl that goes unnoticed. She never gets asked to dance, even though she’s the one that set up all the decorations. And while men might chase after her sisters and mourn Weird as “the one who got away” or pursue Skuld as a coveted conquest, Verdandi is the one who is fiercely loyal. She’ll stand by you through all of your days. At least, until that day when you finally do catch Skuld’s attention.

Yeah, she needs some love. 🙂

Seems like they’d give Verdandi more consideration, then maybe she’d put in a good word to Skuld when she goes out to battle. 😉

Great analogy! I have to agree, the present moment is so fleeting that it escapes the attention of most. Hindsight makes past moments seem more solid, and the future is made for dreamers.

Yeah, we often take it for granted, which kind of seems like what’s happened here to Verdandi. It’s interesting, I think.

Sounds like norns are like many other women in history…men seemed to run things, but behind the scenes, women were secretly keeping things going!

Behind every great man is a fate who gave him that destiny. 😉

So cool. I never knew the names of the Norns. I knew the word “weird” in this context, but not that it was a name.

—
Timothy S. Brannan
The Other Side, April Blog Challenge: The A to Z of Witches

I didn’t even know about norns before posting this. I’m certainly learning a lot. Glad to have shared the joy. 🙂

Verdandi was the ignored, but maybe the others felt threatened by her quiet strength of power, seeing she was in charge of the present, and could change their agenda if she wanted.
http://www.writer-way.blogspot.com

Maybe, but then that seems more of a reason to give her her due. 🙂

Nordic mythology and legends are fascinating. I enjoyed this.

Over from the A to Z.

Epic! The fates on steroids. I learned something completely new. I agree about the verdandi. Overlooked.