I find Yggdrasil to be somewhat confounding, but maybe that’s because the Edda isn’t exactly the clearest of texts. But I’m going to try to patch it all together in a way that I understand and, hopefully, you will as well.

Simply put, Yggdrasil is the world tree in Norse mythology.  The branches spread out across the sky and heavens. It has three great roots that extend great distances. One of these roots extends over Niflheim—a frozen realm of ice and mist. The dragon Nidhogg gnaws at the bottom of this root. Underneath it is also the spring Hvergelmir.

The second root extends to the realm of the frost giants. Underneath this root is Mimir’s well. Mimir was apparently a master of knowledge, gaining his wisdom from drinking water from the well. Odin had to give up one of his eyes for a single sip.

The third root extends up to the heavens and to the realm of the Aesir. Underneath this root is Weird’s well. This is where the Aesir hold court, and they ride there every day by crossing the rainbow bridge Bifrost. Apparently the red in the rainbow signifies burning fire, and keeps unsavory giants from going up into heaven. The norns that live by Weird’s well use the water to keep Yggrasil from rotting. For this reason, Weird’s well is the holiest of all the wells, and anything that comes in contact with it turns white. Two swans feed in the well, and are said to be where all swans in the world have originated.

In the middle of all this is Midgard. The index in the Edda translates it as “middle enclosure” and describes it as “the rampart surrounding the world of men and protecting it from giants” (Sturluson p. 247). I wrote about that rampart in an earlier post. This is where my head starts to hurt. But let’s dive in.

This realm is described as being circular, with the sea on the outer edge. Along the shore of the sea live the races of giants. Then there is a fortification that separates the world from the hostile giants, “and for this fortification they used the giant Ymir’s eyelashes, and they called the fortification Midgard.” (Sturluson p. 12, 13). It’s stated later that the first man and woman, Ask and Embla, were given a place to live under Midgard. I’m not sure why it’s “under” and not “within”. The best I can figure is maybe the fortification is more like a bubble, rather than a wall (which is what I think of at the mention of “fortification”.) Anyway, apparently Ymir’s brains were also used to make the clouds in the sky. Think about that next time you’re finding cute bunny shapes in the clouds above.

This all makes my head hurt because certain details overlap without any explanation being given. It’s said that Ymir’s eyelashes were used to construct Midgard, but then there’s another story of a giant building the fortification without any mention of eyelashes. Is this the same fortification, or is it completely different? Also, the land of the giants is on the shores of the world outside of Midgard. But then, the realm of the frost giants is down by one of Yggdrasil’s roots. Does this root extend up to Midgard just as one of the roots extends up to Asgard? I don’t know. I find it all very convoluted. Perhaps my issue is that I’m trying to get a clear picture of it, which is probably not the point of these myths. But I’m not the only one trying to understand, as this lovely picture attests. 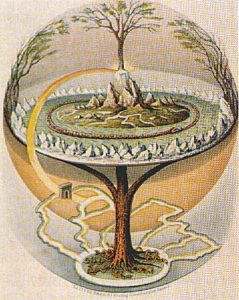 From Northern Antiquities, an English translation of the Prose Edda from 1847. Painted by Oluf Olufsen Bagge via Wikimedia Commons

If you have a better understanding of Norse cosmology, please chime in. I’d love to read a clear explanation of it all.

My head started hurting at the notion of a tree root that extends ‘up’ into heaven. Surely, when devising this myth, the originators would have chosen to represent heaven using the canopy of the tree? Then Midgard would rest somewhere in the lower branches, conveniently placed so as to have a view of the icy frozen ground below and the hallowed sunlit halls, above. But then, I suspect I’m being strongly influenced by Dante. And this obvious flaw in the imagery is probably also evidence of multiple authors with differing interpretations across the generations, and all passed by word of mouth.

As for the fortification the idea would seem to suggest, as the picture shows, that Midgard is divided between a Midgard-for-Giants and a Midgard-for-Men, separated by a wall or bubble of eyelashes and, on a foggy day, bathed in brains (and I thought industrial smog was bad).

However, I wonder at the literal accuracy of the translation that places the land of the giants on the shore of the sea. Perhaps there are two shores? Perhaps the realm of Midgard itself is a sphere, and not the fortification? After all, some cosmologists suggest that the universe is curved in on itself in a similar fashion. Perhaps this ocean is, as well. Thus, the giants all still reside down under the second root, as described. If you think of the giant’s realm as the Antarctic continent, then their realm is still surrounded by the sea. Thus, the sea curves upwards in a sphere (with the trunk of the tree running through its centre) until it reaches the ‘Arctic’ which, in this case, is Midgard.

Thus, both the land of the giants and the land of men have a sea shore, yet are separate. Nothing in your description mentions that the fortification is a solid structure: it merely has to perform that function. Thus, the fortification, likened to eyelashes, could be pointy rocks in the ocean that wreck ships. Or, thinking more creatively, they might be storms that rage continuously, with the eyelashes being huge waves or flashes of lightening that destroy ships attempting the pass through (okay, now I’m being influenced by Jason and the Argonauts).

In this curved ocean universe, with an Arctic Midgard and Antarctic land of the giants, and a large body of water in between, Bifrost would indeed appear to curve across the sky due to the same effects of reflection and refraction that create rainbows in the real world!

Well, there you go. My take on Norse mythology, as understandable as I can make it.

Wow, quite a comment, thank you. 🙂 You make a good point about flaws in the imagery being due to different sources and being passed by word of mouth. Though, the idea of a curved universe also makes my head hurt. (I don’t deal well with cosmology, I guess.) I’m wondering if it’s more a symbolic description. Men carving out a space for themselves among the giants, aka “nature” = Midgard. Weird, curving roots could symbolize reach. The Aesir can reach both heaven and hell, and the giants Midgard and hell.

Who knows though, really. :/

we could just go all scientific and say that they exist in the same place only on a different plane of reality and yggdrasil could be what binds them to each other. =D

or we can shrug and say okay, random and weird. well, can’t say weird. darn it. they have a root for that. hee hee!

Weird determines the past, and the history of the world falls into that category so… mission accomplished! 😉

—
Timothy S. Brannan
The Other Side, April Blog Challenge: The A to Z of Witches

I also grew up on Greek myths. Norse mythology seems rather severe (and a little bizarre) compared to the romantic Greeks. Very cool, though, I’m glad to have learned more of it. 🙂

That is SO cool. I’m working on a series of anthologies based on the alphabet and so there are little bits of paper all over my desk (and house LOL) with LETTER is for WORD scrawled on them. I just added Y is for Yggdrasil to the stack 🙂 You never know…

Yeah, that’s what I thought. 😛

Wow–I keep coming up with different ways to pronounce that word! I love the idea of a world tree; it’s a very visual way to describe mythology. Super cool. You have such an interesting theme!

Here’s my A to Z wrap-up post. I also have an End of Challenge book giveaway going on for either contemporary romance or contemporary YA

Hello! I really enjoyed your analysis of Yygdrasil, and what it meant. You made some very good points, and it was nice and informative. The clouds-as-brains part definately made me giggle!

I was hoping to maybe include you in a blog hop, if you’re interested. Please throw me a line, and I can give you more information?