A Quiet Life in Sweden — A Photo Challenge

Last month Celine Jeanjean over at Down the Rabbit Hole tagged me for a photo challenge where you’re supposed to take pictures every hour of a normal day in your life. Kind of a cool concept, yet terribly flawed as far as I’m concerned, because I’m pretty sure no one’s going to want to see pictures of my laptop for hours on end. Nor do I want to share visual evidence of me wearing my usual House Clothes of sweatpants and a baggy shirt up until about 3pm, where I’ll finally put on Outside Clothes and go for a walk and pretend I’m not a hermit.

So I thought I’d fill in the boring parts with more interesting photos of when we went to Visby in Gotland this summer. Visby is a beautiful little medieval town, still surrounded by its original stone wall. It has little houses, cobblestone roads, and no traffic is allowed there other than for people to drive to and from their houses or hotels. I loved it immediately. I won’t be posting pictures by the hour, though, because honestly I’m too scatterbrained for that.

I generally get up in the morning at 6:30. Right now it’s still light outside at that hour, but that’s rapidly dwindling. I putter around for about a half an hour, visit with the cats and Anders before he heads off to work, and then usually start working by 7:00.

By 8:00, I usually like to make some tea. I found some yummy organic jasmine green tea in Visby that totally rocks my world. I also found some awesome mugs that make me happy just to look at them. An added bonus that they happen to hold twice as much liquid as our standard Ikea mugs.

Then it’s basically this for the next eight to ten hours: 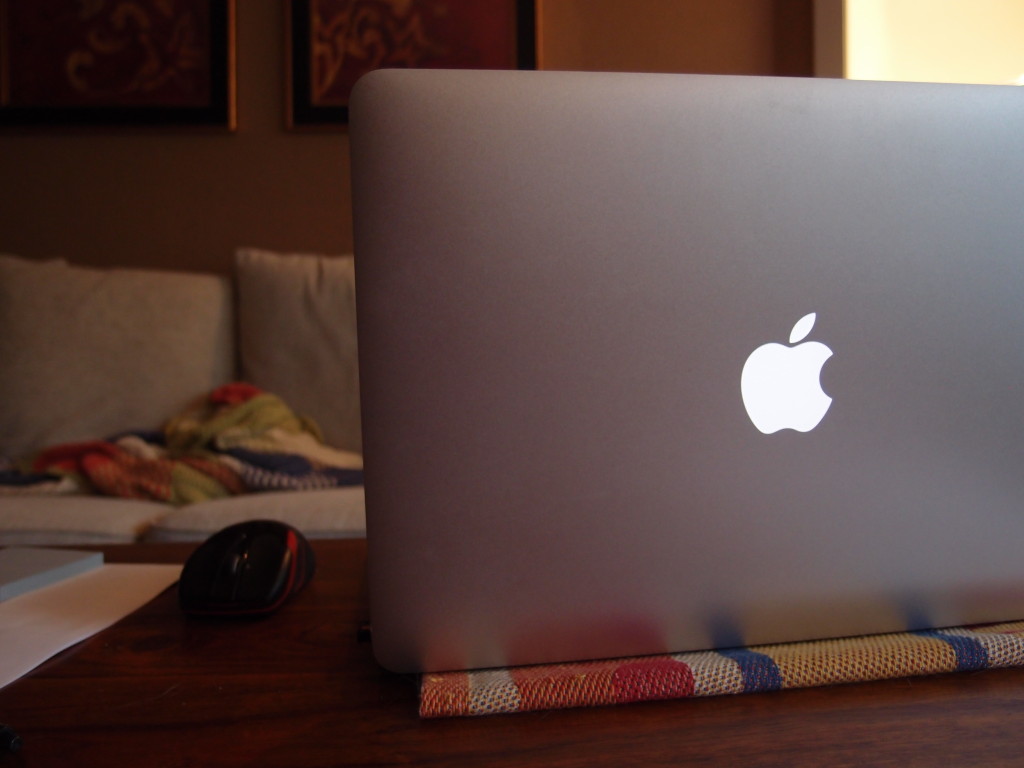 Welcome to my office.

So, instead of boring staring-at-computer-screen pictures, we’ll switch on over to Visby. We arrived just in time for afternoon tea at our hotel. Nothing fancy, but it was nice as it was included in the price of the room, along with breakfast. 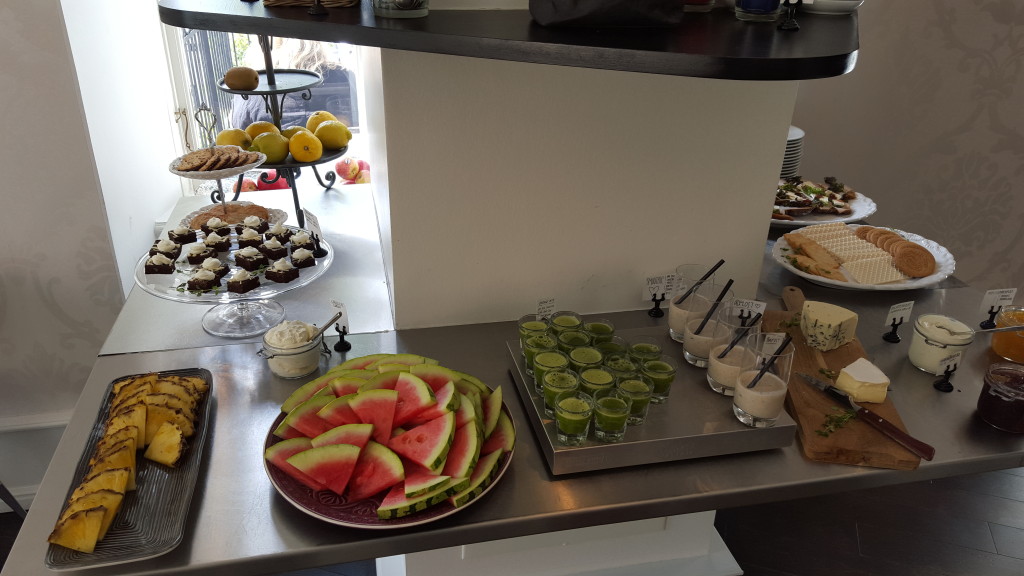 Those green juice shots, while dubious looking, were my favorite (apple and ginger, mmm).

Wandering through the town of Visby was a joy. Such a lovely little place. I’m rather partial to quaint little alleyways, and there were quite a few ruins of old catholic churches that were destroyed during the Reformation.

Looking out over the Baltic Sea was also a sight to behold. It’s a lot calmer than the Pacific, which, being from California, is what I’m used to seeing when looking out over an expanse of water that stretches to the horizon. It felt kind of surreal. I think I sometimes forget I live in Sweden, as odd as that might sound. 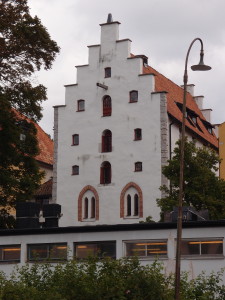 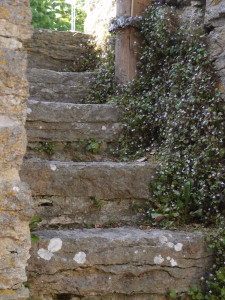 And then there was the adventure of walking from Lummelunda Cave (we didn’t go in because it was way too cold) to a neat little restaurant that had an awesome veggie buffet. A taxi guy told us it was a short 5K or so walk along the beach to get there. So we thought, “Cool, adventure!” and made the trek.

Now, I walk 5K all the time. 5K is nothing. I laugh in the face of walking 5K, but this walk felt like some time-warped epic journey where I imagined myself perishing on the rocky beaches of Gotland because I was wearing sandals that started to rub my feet the wrong way and I only brought a 100cl bottle of water. Also, no hat. So I got sunburned and didn’t even know it because, while it’s really warm standing in the sunlight, the wind in Gotland is really cold. So, overall, the weather felt pleasant, even though I was slowly getting roasted. Hooray for minor dehydration!

Got some nice pictures on the way, though. 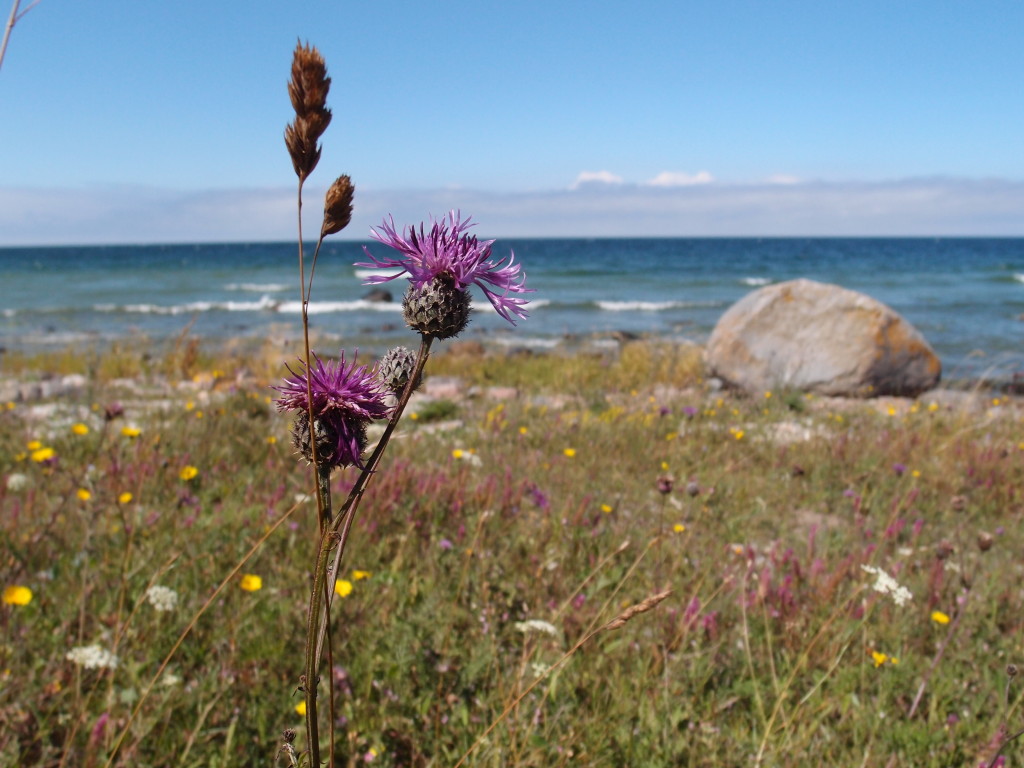 Not a bad place to keel over.

The food on the trip was pretty good, too, except for the first place we went to with theoretical “burgers” (more bun than burger, among other failings). For some reason, whenever we travel, seems like the first place we go to has terrible food. So I suppose it’s fitting that the best food came towards the end of the trip when we went to this restaurant that was part of a farm. Had the yummiest salad ever. 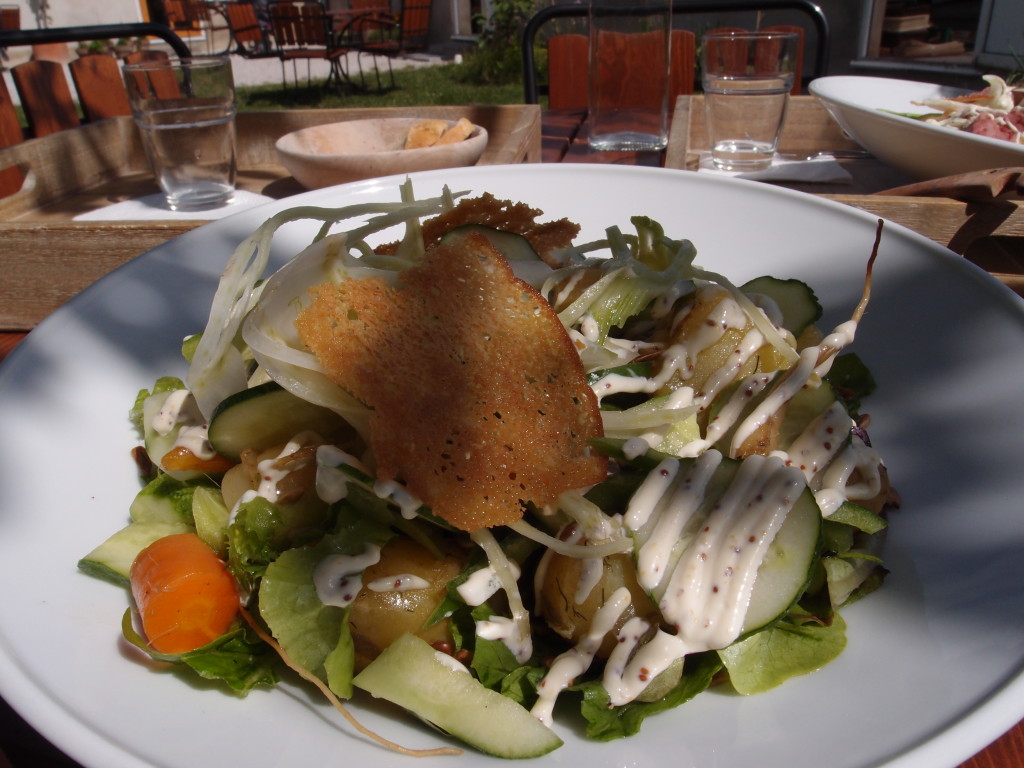 And that pretty much sums up the trip and brings us back to the regular world. After I’m done writing, I’ll usually go out walking or running in the nearby woods. I’ve shared some pictures from my walks, though I haven’t posted pictures of the sheep.

There’s a pasture in the middle of the woods, and sometimes there are sheep there. In fact, I was there when the sheep were herded in this summer. I was hunkered down taking pictures of unripe blueberries for my Magical Moments blog post when a herd of sheep stampeded by. They stopped right next to me, and I just crouched there, blinking and feeling stunned that I was suddenly looking at all these sheep in the narrow little road. By the time I found my wits and lifted my camera to take a picture, they were getting herded into the pasture. And they’re still there, which makes me happy. 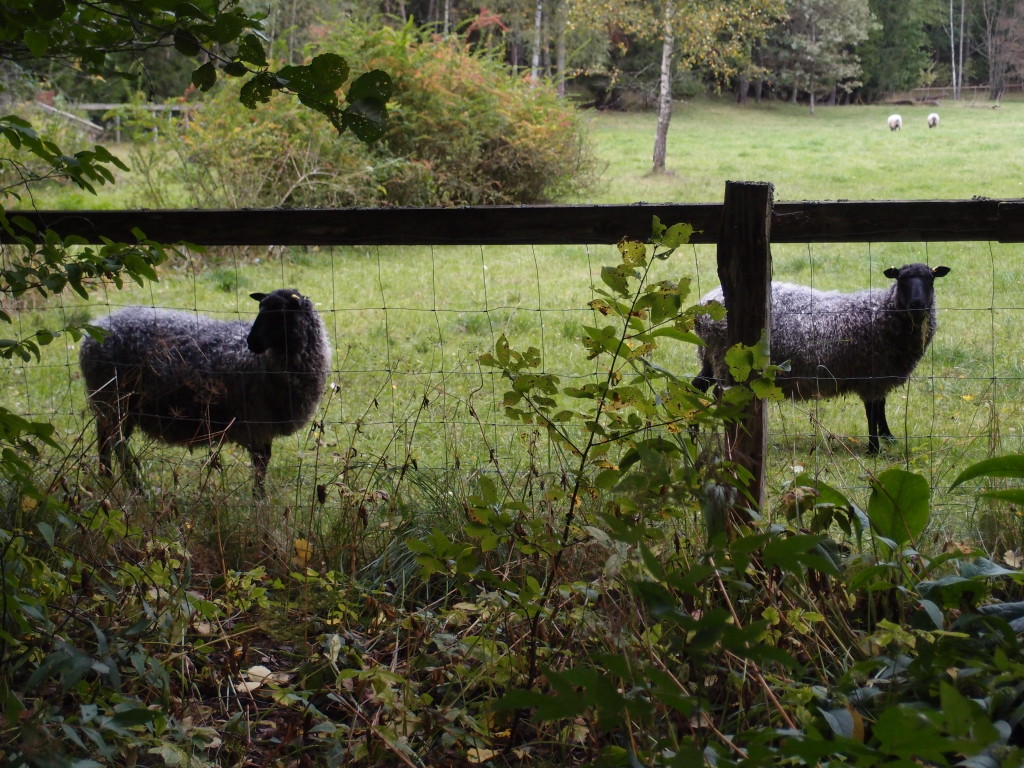 And that wraps up this photo challenge. I hope you enjoyed the little glimpses of my life and of Sweden. I’m going to tag some folks for the photo challenge, though there’s no obligation to take part if you don’t want to. Alternatively, if I haven’t tagged you and you’d like to take part, then please do!

Samantha Mozart at The Scheherazade Chronicles

I’m so glad you took part in the challenge! Your normal day sounds just like my normal day, although on top of photos of tea, cats and computers, I’d have photos of a dog, too ;-p I do love the sheep mug by the way, those sheep are almost as cute as the real live ones 😉

Glad you survived the walk and the sunburn and the dehydration 😉 all worth it for that beautiful photo with the thistle!!

Sorry I’ve been out of the loop of late by the way – I still have to catch up with your Hazel and Holly series which I’m really looking forward to! I’ve been down in my writer cave getting loads done, which is great, but actually turning into a hermit, which is not so great lol. Happy to hear you’re also on the edge of hermitdom though – I guess a lot of us writers hang out there!!

Thanks, Celine! Glad to hear you’ve been busy in the writer cave, I’m still waiting for the Bloodless Assassin sequel! 😀 And, yes, I think there’s probably a lot of us writers milling about on the edges of society, all mumbling incoherently while avoiding eye-contact. 😉

Aww, that first pic of cat under blanket is just darling! 🙂

That’s Sally. She’s all, “ooh look at me I’m all cute and white and fluffy with a pink nose” but she’d leave you bleeding on the side of the road if it meant more kibbles in her gullet. And we love her for it. 😉

What a nice way to spend your days. 🙂

It is pretty nice. 🙂

I’m a-sorreeeee … but I won’t be joining in – I think I do a photo challenge everytime I post … I didn’t do the one a day for 5 day one which Susan asked me about, and then someone else nominated me – not good at these things … so sorry!

Loved this though .. and that salad does look appetising .. cheers Hilary

Yes, lots of history in Visby. Was great wandering around there, letting my story-brain run away… 🙂

No worries at all, Hilary! I thought of you because you have so many pictures on your blog, but I totally understand the desire to want to bow out from these kinds of things. Thanks for reading and commenting! 😀

I love this!!! That is a beautiful place to keel over. That made me chuckle. 😛 I always keep a flimsy cap in my purse for those unexpected sun exposures – which are plenty. My dark freckled nose can attest to that.

Off to complete the challenge!

Thanks Tanya! That’s a good idea about the hat. The hat I have is also flimsy, so I just need to get in the habit of carrying it with me during the summer.

Great photos! I especially like the beach shot. I can’t believe you found grass by the shore. All we found were rocks. My feet were killing me by the time we left.

Thank you! The beaches were really rocky, but every now and then there would be some dirt and grass. And I hear you about the feet. Man, I was so exhausted after that walk, it was crazy. 😛

Very nice. I love old towns and villages, and the woods. 🙂

Thanks, Michelle. That’s pretty much the dream location: living out in the woods next to a little old town. 🙂

I love the photos of Visby, especially the vines climbing up the stairs and stone wall. What a beautiful place! The kitty’s pretty cute, too. 🙂 Your day sounds very relaxing and non-chaotic. I envy you.

I just signed up for your newsletter!

Thank you Lori! Yeah, I thought that collection of flowery vines crawling along the stairs looked special. And the kitties are very cute. I think they know this and use it to their advantage… 😛 It is really nice being able to spend my days writing, but I will say I still do get my share of stress and frustration headaches. Wouldn’t trade it, though. 🙂

Thank you for signing up! Super glad to have you aboard! 😀

Loved your photo challenge, loved the kitten, and the sighs and the food 😉

Celine tagged me for this challenge too. I haven’t posted yet, but I’ve already taken all the picture. Just like her, I’ll do a routine day and a holiday day… I’m working on it.

And don’t think I’ve forgot, I’ll be reading your series Hazel and Holly. It’s just that my holiday disrupted my rhythms, but I’ll get to it, be assured of that 😉

Thanks, Sarah! Good to hear you’ll be doing one too. They take a while to put together, don’t they? I find photo-heavy posts to be pretty intense.

And whenever you have time, Hazel and Holly will be there! Hope you enjoy it. 🙂