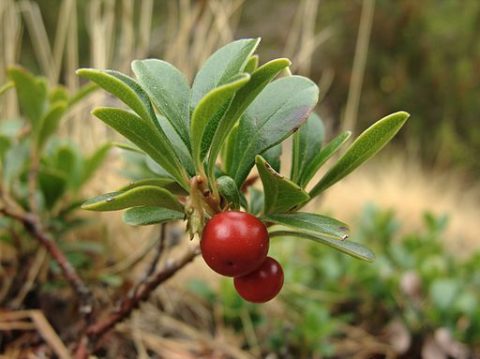 A to Z Herbarium: Uva Ursi

Also known as bearberry, because apparently bears enjoy eating the fruit. Can be used in sachets to increase psychic powers. It’s also used in ceremonial smoking mixtures among a number of Native American tribes.

In Iceland, uva ursi was used to make ink, tan leather, and dye yarn. A tonic made from the berries was used to stimulate the blood and increase appetite. It was also believed carrying bearberry would protect one against evil spirits and ghosts.

Too much uva ursi can be toxic, however, and should not be taken more than five days in row, or more than five times in a year. It contains hydroquinone which can be harmful to the liver. So be sure to check with your doctor before taking this herb.

I have never heard of Uva Ursi before. It does sound like a really useful plant, though.
Sophie
Sophie’s Thoughts & Fumbles – Dragon Diaries

I hadn’t heard of it either. It sounds cute and roly-poly to me. 😉

I’d never heard of Uva Ursi before, either! Thanks, Sara!

Hi Sara – I’ve heard of this plant before … though can imagine that the plant was used to make ink, tan leather and dye yarn … similar to oak galls – and the origin of primitive ink …

Interesting additional ideas for the plant though … cheers Hilary

I always find it interesting the many different sources of inks and dyes.

One of those cheeky plants that can be beneficial of harmful, depending how you treat them, eh? 😉

Yeah, there are a fair amount of those. 😉

We call it bear grapes (medveszőlő), but I think some English-speaking person passed up a chance to call them bearries…

Noooo “bearries” haha! Bear grapes makes sense, because “uva” is latin for grape or berry, and ursi is for bear.

Great choice for U. I literally knew nothing about Uva Ursi except its name. Lovely little berries.

For the first time, you have caught me out with a herb I’ve never heard of! Interesting indeed.I can hardly wait for X and Z!

Barbara In Caneyhead - 5 years ago

I had never heard of this and don’t recall ever seeing it around here. Interesting use, similar to cranberry juice.
Perspectives at Life & Faith in Caneyhead

They do seem very similar to cranberries, both in look/use and where they grow.

Yes, Uva Ursi’s toxicity is concerning. I prefer Fennel or Corn Silk tea — both diuretic, but safer to consume.

Good to know about the fennel and corn silk. I’d also be pretty wary about taking uva ursi.

I learned something new today. Where does it grow in North America?

I think it grows mostly in the northern parts, in cooler climate areas as it doesn’t seem to tolerate high heat. So, Canada, Alaska, and the northern-ish states in the US are probably the most common, I’d say. Possibly further south if in mountainous regions. It seems to do well in sandy, acidic soil, so theoretically it probably grows in all sorts of places.

That’s what it looks like. I was doing one of those detox kits a few years ago, and the special tea blend included uva ursi. Thanks for the info on the Prince symbol! Maui Jungalow

BY the way, I did update the U blog post with a link to your blog in the caption. Thanks!

I did a detox once. To say I was not a happy camper would be a bit of an understatement. I haven’t done one since. Haha glad to help with the Prince symbol! 🙂

I have heard of this. It is interesting that things can be very good for us, but the side effects can be a bit unnerving. Research and moderation are key.

Those look like the red berries I often see growing in small bushes (not nightshade), though I was told those are poisonous.

They could well be, given the toxic attributes of bearberry. If it was what you saw, it was probably a good idea you were told they’re poisonous. Or, it could have been a different berry, and it seems like there are a fair amount of toxic red berries out there.

This one I’ve never heard of before so not sure if it grows in the UK or Australia. I do love how natural things are still used by some people to produce natural dyes for cloth – there seems to be a bit more of a resurgence for this.

It might grow in the UK, not so sure about Australia though. And, yes, I love the resurgence of old knowledge and ways of doing things. I think it helps keep us in touch with who we are.

I’ve never heard of uva ursi or bearberry before…

I hadn’t either prior to this post. Always fun to learn. 🙂