Every year around Christmas time I get ideas in my head of all the food I’m going to make. More often than not, it never actually happens. Last year, though, I made a breakthrough and actually made the applesauce I had been intending to do for years, and some crisp flatbread to boot. Success!

This year, it was supposed to be spiced wine — or glögg, as the Swedes call it. But then I was in the liquor store and they had so many varieties of glögg that I caved and bought a bottle. I’m still pretty excited though, because this is the real deal, and not the 2% alcohol stuff we normally get in the regular stores (you have to go to dedicated liquor stores here to get proper booze). I’m excited to see how it tastes. If it’s underwhelming, I’ll probably revisit making my own glögg next year.

So, rather than sharing my adventures in mulling wine, I thought I’d share a little bit of history around glögg and other tasties Swedes like to enjoy during December.

Avoid the wrath of the tomtar by giving them rice porridge. Otherwise, they’ll steal your spleen. And then your glögg.
Photo courtesy of Spiritmuseum.

Spicing wine is certainly nothing new, dating way back to ancient Greece and Rome. In the Middle Ages, however, it seemed to be in it’s heyday, and it was the thing to do with one’s wine in Europe. Around the 1600s, the custom started to fade in the rest of the continent, but the Swede’s kept on with it regardless. Around this time is also the first documentation of “glödgat vin” or warmed wine.

Around the 1800s “glödgat vin” was shortened to “glögg,” and recipes on how to make it started popping up in recipe books. It was also around this time that it really took hold as a Christmas tradition. Wine sellers would often have their own variation of glögg, which was (and still is) a blend of red wines, sugar, and spices such as cinnamon, cardamom, cloves, and sometimes vanilla or orange peel. The labels on the bottles often featured fanciful motifs such as tomtar — little gnome-like faeries.

AKA, rice porridge. Like glögg, eating rice porridge became a Yule tradition in the 1800s. It was around this time that rice became available to more of the population, rather than just the wealthy.

As far as I can tell, eating porridge around Christmas time was part of a post-harvest celebration. Food was plentiful, and so one could celebrate the season by having more food than usual. Even livestock were said to be given more food around this time.

Traditionally, porridge was made out of rye or barley. As rice became more accessible, it was then used for the Christmas porridge and made extra luxurious by adding cream and butter. In the late 1800s, the tradition of putting an almond in the pot of porridge came about. It was said that whoever found the almond would then get married the following year. Also, it was advised to leave out a bowl of rice porridge to the gårdstomten (essentially the Scandinavian version of a brownie or hob). If you failed in this duty, he might get angry and put a pox on your cows.

Lussekatter are buns of saffron bread. I hesitate to call them sweet rolls, because they aren’t that sweet. But they are sweeter than normal bread. Of course, you can make them sweet by rolling them up with sugar and butter, kind of like a cinnamon bun but with vanilla sugar and raisins. 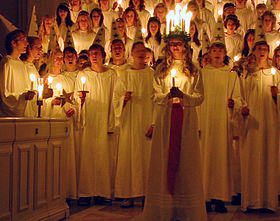 There seems to be some dispute over where the name “lussekatt” originates. One theory is that “lusse” comes from “Lucia” who is a saint that seems to be celebrated primarily in Sweden and Italy. In Sweden, however, the religious aspect is downplayed and is more a celebration of light. Which makes sense — it’s dark here in December. Also, Lucia is on Dec. 13, which was once considered the Winter Solstice before calendar reforms. It’s a nice blend of paganism and religion, like so many holidays.

Anyway, another theory is that “lusse” comes from “Lucifer.” Apparently there is a story that the devil, in the form of a cat, would punish naughty children. But for the good children, Jesus (in the form of a child) would hand out buns. To keep the devil away, the buns were colored golden with saffron. Who knows which one is true. But I will say that the devil romping around as a cat does explain where the “katt” in “lussekatt” comes from. 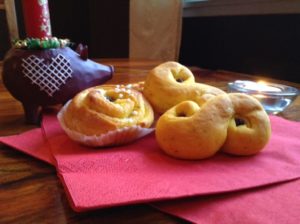 Lussekatter brighten up the dark months.

And that concludes our little tour into Swedish food lore. I hope that wherever you are, and whatever you are eating, your holiday season is filled with happiness, magic, and wonder.

You changed your blog!

It looks lovely, really. You know I loved your other one because it looked like a fairytale, but somehow this one is just as beautiful!

Also, how do you speak swedish? That’s some seriously letterage. But the food sounds lovely, and I think food would be how I chose to brighten up the dark months as well!

Yep! As much as I loved the other theme, I feel this one will let me showcase my writing a bit better.

Swedish pronunciation is a bit of an odd beast–words aren’t really pronounced the way you’d expect in English. It really threw me for a loop when I first started learning. But “glögg” for instance, is pronounced like “glug.” 🙂

If you liked wine glögg, next Christmas you’ll have to try the real stuff. Svenska Eldvatten made a glögg spiced with whisky at the end of 2014. That was incredibly gorgeous. You can order it at Systembolaget, it’s not in their usual sortiment but definitely worth the inconvenience.
I found your blog on some list that had to do with the A to Z thing, and thought it was so cool that you live in Sweden. 🙂

Hi, Susanne! I rarely drink so I’m not sure I could handle glögg spiced with whiskey. Even the bottle I bought this last year was… strong. 😉 I’m a pansy haha.

Thanks for stopping by!