The Inscrutable Nature of Ravens 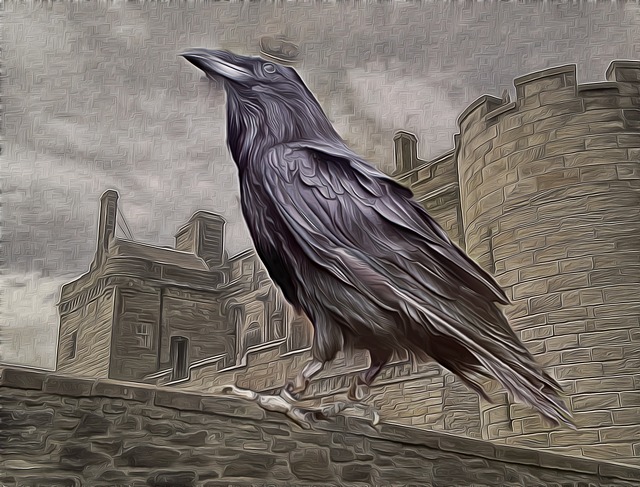 I’ve been thinking a lot about ravens lately. Probably in part because autumn is here and Halloween is approaching, and the general atmosphere outside has been rather raven-esque. It’s probably also because I’ve been reading—and just recently finished—Jonathan Strange and Mr. Norrell by Susanna Clarke. Excellent book by the way, I highly recommend it for anyone who likes both 19th century literature and fantasy heavily steeped in folklore. Ravens play a big part in that book, and so it’s gotten me thinking about them, both in general as well as how I’ve used them in my own writing.

Ravens in Norse and Celtic mythology

They are striking creatures—with their pure black feathers, glossy black beaks and black eyes. Given that they are carrion birds, they have often been linked with war and death. The Celtic goddess Morrigan was sometimes depicted with the head of a raven. She was also said to take on the form of a raven—or even trio of ravens—and fly to battlefields to decide who would live or die.

Morrigan reminds me of Skuld in Norse mythology, but interestingly, Skuld isn’t associated with ravens—Odin is. He’s known as the raven-god due to his two raven companions: Hugin (Thought), and Munin (Memory). Every day at dawn Odin would send his ravens out into the world, and each evening at dinner-time they would return and sit on his shoulders and whisper to him what they saw.

“Hugin and Munin fly each day over the mighty earth. I fear for Hugin lest he come not back, yet I am afraid more about Munin.”

The quote comes from the Edda, along with these various names for ravens, which I thought rather splendid: “crow, Hugin, Munin, secure-mood, early-flier, year-counter, flesh-marker.”

In Greece, ravens are associated with the messenger god Apollo. There is a myth that ravens once were white. The story is that Apollo fell in love with Coronis. When a raven told him that she was having an affair with Ischys, he killed her—though he saved his unborn son—and burned the raven’s feathers so that they turned black. Not cool, Apollo. Maybe try keeping it your pants for once, eh?

In the northwestern region of North America among Athapascan-speaking tribes, the raven is seen as both a creator and trickster. I read one story of Raven who took on the form of a human and tried to marry a human girl. But the girl found him out (he had dusted himself with lime to hide his black feathers), and ran back to her parents.

In a similar vein to the above two stories, in Australian Aborigine lore, Raven is said to have tried to steal fire from “seven sisters” (the Pleiades), but failed and his feathers were burned black.

There is more, of course. A lot more. King Arthur supposedly turned into a raven when he died, and is said to remain in that form still. (Though another source says this is a red billed Chough—a member of the Corvidae family to which ravens also belong—and it’s supposed to be very unlucky to kill this bird in Cornwall.) Scottish Highlanders associate ravens with second sight. In Egypt ravens symbolized destruction and malevolence, while in Chinese mythology they are a solar symbol.

Interestingly in Hebrew/Christian lore, there are contradicting stories of ravens. In some, they symbolize impurity, mortification, destruction, deceit, and desolation, but in others they were protectors of the prophets. In this contradictory lore, “ravens represent the solitude of the holy hermits, yet also the souls of wicked priests and witches.”

The quote is from a lengthy article about ravens at druidry.org, and it’s well worth checking out. A lot of what I found for this article was found there, plus a lot, lot more. If you’re interested in reading more about raven lore, it’s an excellent place to start.

Tom Thumb gets swooped by a raven

On a sort-of related note, I found a digitized book of 18th century chapbooks. The chapbooks seem to span an array of subjects, but one of them is Tom Thumb, and there’s an engraving of him having been swooped up by a raven. You can read the book for free at Internet Archive. 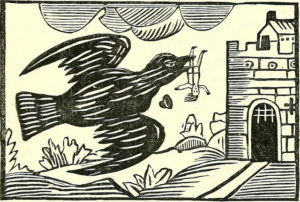 “The King of Crows” by Ryszard_Andrzejowski

That is interesting…I like ravens too. I’ve always associated ravens with Edgar Allan Poe. 🙂

Thanks, Michelle, and I also associate them with Poe! It goes something like this: Autumn=Halloween=Poe=Ravens. 😉

I have an image of a raven on my main wall of pictures. I got it in Alaska where, as you point out, the Athapaskans have a special place for the bird in their mythology and culture. My son, who lives in Alaska, recommended I read “Mind of the Raven: Investigations and Adventures with Wolf-Birds” by Bernd Heinrich. I have done so and recommend it to you. They seem to be at the pinnacle of what the Corvids can be and can accomplish. PS: I think Odin had both a Wolf and a Raven.

That’s cool, Ron, and thanks for the book recommendation! I’ll have to check it out. And you’re right about Odin. He also had two wolves, Geri and Freki. Odin apparently likes his animals to come in pairs. 😉